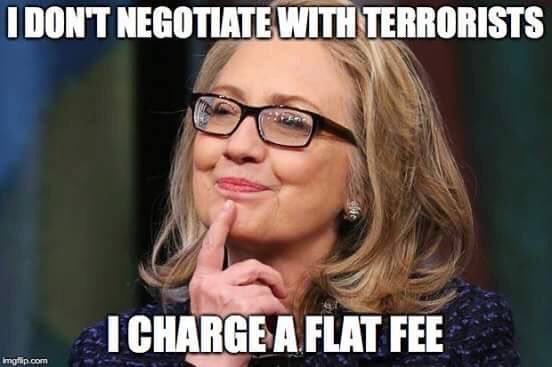 Hillary Clinton, who almost certainly ran a pay-to-play scheme during her tenure as Secretary of State, is now pointing fingers at Donald Trump’s time as a private citizen.

“More than half the people outside the government who met with Hillary Clinton while she was secretary of state gave money — either personally or through companies or groups — to the Clinton Foundation,” the Associated Press reported on Sunday.

Clinton’s campaign doesn’t want you to dig too deeply into how this affected policy however — so they are pointing their fingers at Trump.

“Donald Trump has been falsely attacking the charity run by [former] President [Bill] Clinton when it is Trump’s own foundation that has been caught in an actual pay-to-play scandal,” Jennifer Palmieri, Hillary Clinton’s communications director, said in a statement released on Friday.

Palmieri alleges that the Donald J. Trump Foundation made an illegal political contribution in 2013 to a group called “Justice for All,” that was supporting Florida Attorney General Pam Bondi. This took place during a time when Bondi was allegedly deciding whether or not to investigate Trump University for fraud — which she ultimately declined to do.

“While the Clinton Foundation has received the highest ratings from independent charitable watchdogs, Donald Trump’s use of foundation money to donate to the Florida Attorney General actually broke the law,” Palmieri said in the statement. “Worst of all, it appears the payments may have been intended to stave off an investigation into the sham Trump University that has ripped off unsuspecting students.”

Trump ended up paying a $2,500 fine to the IRS over the contribution, the Hill reported, because he failed to list the donation in his 2013 tax filing.

The Trump Organization maintains that it was an honest mistake.

The finger pointing leaves voters with a decision to make: what is worse, a businessman at worst protecting his interests… or Saudi Arabia suddenly getting an arms deal with the United States after a huge contribution to the Clinton Foundation?

Last Monday, during a briefing with reporters, Mark C. Toner, the State Department’s deputy spokesman inadvertently admitted that pay-to-play was just how things worked under Clinton.

“This was simply evidence of the way the process works, in that a secretary of State has aides getting emails or contacts by a broad range of individuals and organizations,” Toner said.

As Rick Manning wrote for the Hill earlier this week, “pay to play is the Clinton way.”

“The inadvertent admission that this is exactly how the process works in the Clinton world, where you pay for access and if you can’t afford it, you get left behind. A world where extortion becomes the norm, and people who should know better lose their bearings and attempt to cover it up,” Manning wrote.

Can someone please inform the Clinton campaign that it is unwise to throw stones when you live in an already-shattering glass house?