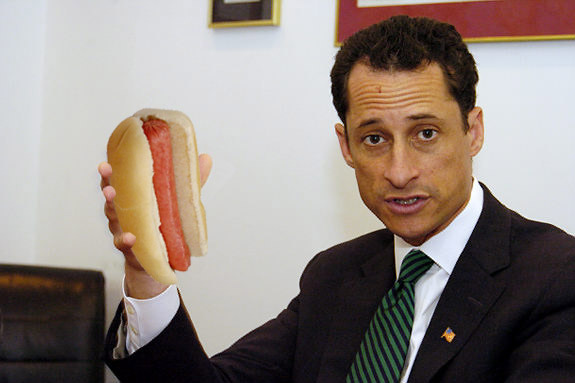 The disgraced Congressman made headlines once again this week, with yet another sexting scandal which prompted his wife, Hillary Clinton’s top aide Huma Abedin, to finally leave him.

The scandal marks his third time being busted for sexting. The first instance was in 2011 when he accidentally tweeted a photo of his crotch, which lead to him resigning from Congress under extreme pressure. The second was during his run for mayor of New York City, when now-porn star Sydney Leathers went to the press with their explicit chats — in which he referred to himself as “Carlos Danger.”

It was hard not to feel bad for Weiner the first couple of times, especially with the petulant and disgraceful behavior from Leathers — towards a man she had never even met in person.

This time, explicit chats between Weiner and a busty brunette were obtained by the New York Post — including a photo of his crotch, taken with his five year old son sleeping in the bed in the background. It has become difficult, even for the most sympathetic, to feel sorry for him at this point.

Luckily for him, there is at least one person who still feels bad, Charles Anderson, the vice president of porn.com.

Anderson is taking pity on the former politician and has offered him a “love and sex” column that would include such important work as reviewing pornographic films. The column, should he choose to accept it, would be titled “Dear Mr. Weiner.”

Anderson has stated that he believes Weiner is a “sex addict,” and that he “must feel very alone.”

“This offer is not made in jest. To show our sincerity, Flynt Management Group, LLC is willing to pay twenty percent more than your former Congressional salary, ensuring that your medical benefits would be equal to what you were previously receiving. While you will have to relocate to our corporate offices in Beverly Hills, California, we would pay for all relocation costs,” Flynt wrote in the Huffington Post at the time.”

The married Weiner did not accept, but perhaps single Weiner will give it a go this time around as his window of options continues to shrink.

Abedin has worked for Clinton since the 1990s, during Bill Clinton’s presidency and has stayed by the former First Lady’s side ever since. Many, including Republican nominee Donald Trump, have noted that due to Abedin’s proximity to Clinton, Weiner’s inability to resist his attachment to sex is a national security issue. Trump stated that her involvement with Weiner’s wife is just another example of her bad judgement.

“I only worry for the country in that Hillary Clinton was careless and negligent in allowing Weiner to have such close proximity to highly classified information,” he continued. “Who knows what he learned and who he told? It’s just another example of Hillary Clinton’s bad judgment. It is possible that our country and its security have been greatly compromised by this.”

Weiner’s sexual scandals were chronicled in a now-popular documentary called Weiner, in which Abedin’s contempt for her likely soon-to-be-ex-husband was impossible to miss.