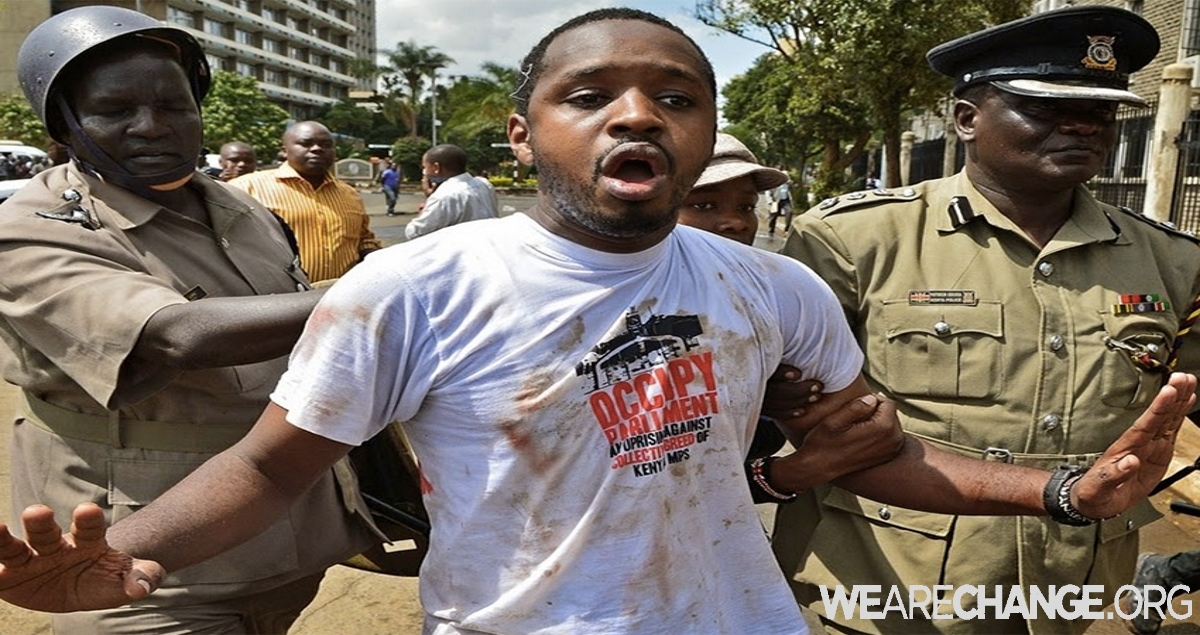 The average city dweller in Kenya pays 16 bribes a month Kenyan activist Boniface Mwangi is detained by police during a street protest on corruption in Kenya’s capital Nairobi on Dec. 1, 2015.

In East Africa’s most prosperous economy, the average city resident pays up to 16 bribes per month, according to Transparency International. Locals have dubbed Kenya “ya kitu kidogo” — the land of the “little something” — a kind of homeland of the bribe. And on the streets of Eastleigh, Nairobi, the victims of those bribes point their finger at one perpetrator.

“If you look at the police who are meant to protect them,” says local activist Abdullahi Mohamed, “they just arrest them to extort cash.”

Like most of his neighbors, Mohamed is ethnic Somali and Muslim. Half a dozen residents of the Eastleigh neighborhood say the police come here not to patrol, but to get rich. They describe the same scene repeating every Friday night: Police pick up ethnic Somali residents and threaten them with jail unless they hand over money. The scene has become so normal, the neighborhood is known as a police “ATM machine.”

“They take so much money,” Mohamed describes. “You see cars from all police stations in Nairobi converging here.”

Eastleigh is targeted for bribe collection because its mostly Somali Muslim population lacks the political power to withstand extortion. The neighborhood’s central artery is almost always pure cacophony. Too many cars and trucks compete for too few roads. Market stalls spill onto the streets. To survive here is to hustle; there is no quiet or easy living. Toward the back of the neighborhood, young men sniffing glue out of plastic bottles roam on dirt roads. Kenyan citizens who are ethnic Somali often describe themselves as neglected, second-class citizens.

“Garbage is not collected,” Mohamed says. “They build half-baked roads. Year in, year out, they promise things. Never happens.”

While the politicians practice neglect, two police officers admitted they’re more focused on getting cash than keeping the peace.

“The little amount that you are paid as salary cannot [support] you and your family,” one of the officers said. He asked not to be identified in order to speak freely about actions he and his colleagues take. “If somebody gives you some amount, somewhere … you have to take the money and then you forget about work.”

Both officers described extortion rings as police policy. Superiors expect a certain cut of illicitly obtained cash at the end of each shift. “It’s right from the junior officer to the higher-most,” the officers said.

And when the police are for sale, criminals buy their freedom.

“A criminal can come, do anything that they want, they go free,” one officer said. “You’ll pay and you go free.”

Meanwhile, the police do arrest anti-corruption activists such as 32-year-old Boniface Mwangi.

“I grew up in Eastleigh, and every cop who gets hired wants to go and work there because when you go to Eastleigh, every single Somali is a walking ATM,” Mwangi described on a recent afternoon, sitting on a roof overlooking Nairobi’s skyline. “Instead of seeing humanity, [the police] see dollar signs.”

In a country where “activist” is a dirty word, Mwangi is a fearless, relentless firebrand. He’s a former journalist whose political activism is often a performance; he once covered pigs with fake blood outside parliament.

“Pigs are selfish. And our members of parliament are like pigs,” Mwangi says. “If you steal a lot of money, you go into politics and you buy yourself immunity.”

He runs Pawa254, a collective that tries to increase awareness of corruption through art, music, and high-profile events. Many might consider him over the top, but what he’s fighting is often similarly outrageous — and well-documented. Ninety-nine percent of the bribes that Kenyans pay are demanded by government officials, state employees and the police, according to Transparency International.

Residents here accuse police of being in the pockets of crooked politicians. In one recent example, Mwangi attended a schoolchildren’s protest after a landowner connected to the deputy president seized a school playground so he could build a hotel parking lot. The police broke up the protest — and protected the landowner — by firing tear gas at the young students.

“They tear-gassed innocent kids who only wanted to access their playground,” Mwangi says, angrily. “Other countries have mafia. In Kenya the mafia have a country.”

Officially, the government and the police deny corruption. They promise to prosecute any officers who ask for bribes. But police spokesman Charles Owino also promises to prosecute the victims.

But the residents of Eastleigh say they will always choose paying bribes, which tends to keep them out of jail.

“They did a survey the other day about young people and the majority are saying, if they had got a chance to be corrupt, they’d be corrupt,” Mwangi says. “In a country of shortcuts, where there are no national values, then everyone wants to become a thief.”

The “thieves” are out to get Mwangi. He says he often receives death threats. He considers his mortality so often, he produced an online video called “One Day I will Die.” It shows his cold body lying on a hospital gurney. His wife walks through a cemetery where he has been buried. Mwangi’s voiceover implores viewers to call out corruption and not be afraid.

“I grew up a coward, and I grew up afraid,” Mwangi explains. “And then I realized I was living an empty life. And when I lost that cowardice, I said, ‘No, I’m going to take a stand.’”

He is, perhaps, slightly protected by being a member of the ethnic group that is currently running the country. But he admits his safety is not guaranteed.

Asked why he is willing to risk his life, he cites his three children: “If I don’t do these things, they will go through so many troubles.”

This story was first published on PRI.org.