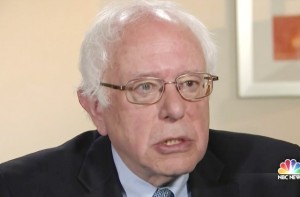 During a discussion of “regressive” taxes on Meet the Press this morning, Bernie Sanders questioned the legality of cigarettes, given all the health hazards that come with smoking.

Sanders defended his opposition to a soda tax in Pennsylvania to fund pre-k for all, saying that it’s important to “raise the money in a way that is progressive, not on the backs of lower-income and working people.”

Chuck Todd asked if he feels the same way about cigarettes. Sanders said there’s clearly a difference between cigarettes and soda:
“Cigarettes are causing cancer, obviously, and a dozen other diseases, and you know, there is almost a question of why it remains a legal product in this country.”