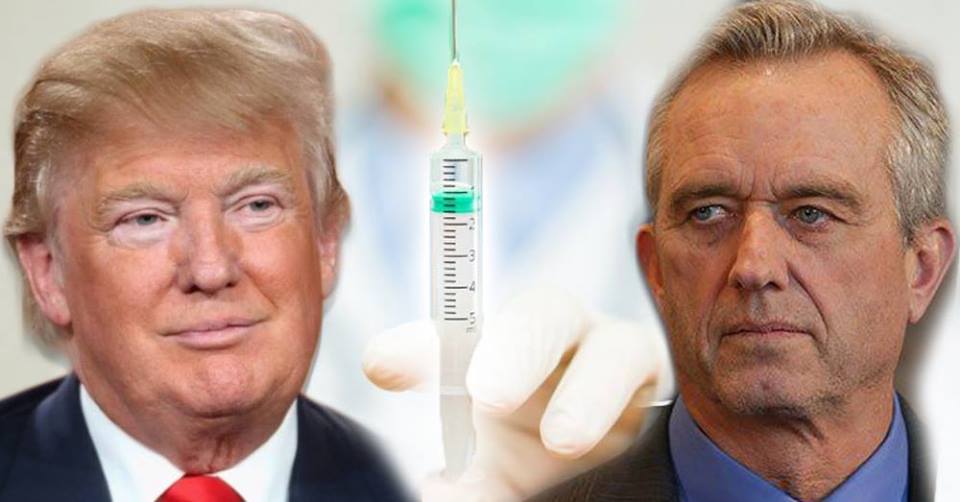 Donald Trump has reportedly chosen Robert Kennedy Jr. to lead the Commission on Vaccine Safety, and the mainstream media is working overtime to obstruct the facts of this important story.

Kennedy announced the position after he met with Trump on Tuesday, and as a result, mainstream media outlets began referring to Kennedy as “an environmental activist and skeptic of vaccines” when reporting the story.

As previously reported, Kennedy has been a vocal critic of the Measles-Mumps-Rubella (MMR) vaccine. He is now being ridiculed by the media for claiming that there is a link between autism and the preservative Thiomersal, which is present in the MMR vaccine.

“What happened was, the vaccine schedule was increased. We went from receiving about 10 vaccines in our generation, to these kids receive 24 vaccines, and they all have this Thiomersal in them—this mercury—and nobody bothered to do an analysis of what the cumulative impact of all of that mercury was doing to kids,” Kennedy said during an appearance on MSNBC in 2012. “As it turns out, we are injecting our children with 400 times the amount of mercury that the FDA or the EPA considers safe.”

While Kennedy is criticizing the current standards, he is also calling for more analysis, more scientific research, and more accountability from vaccine manufacturers.

One thing you have to understand about these manufacturers is that in the United States, the pharmaceutical complex was able to successfully lobby outward government to make sure that they cannot be held accountable to the law. Currently, parents cannot sue vaccine manufacturers if those manufacturers creates a defective or destructive vaccine that harms their children.

The “vaccine market” is a $24 BILLION industry and experts are saying it will grow to be worth over $60 billion by 2020. Yet, the revenue continues to grow even though the manufacturers have been caught falsifying data and lying to the public, purely for profit.

Merck, the pharmaceutical giant that produces the MMR vaccine has faced multiple allegations of misconduct coming from at least three whistleblowers, two of whom were former Merck scientists and one of whom was a scientist for the Centers for Disease Control. The accusations included failing to disclose the ineffectiveness of certain vaccines, using improper testing techniques and manipulating test results.

Yet, because of the current law, companies like Merck cannot be held accountable for their actions. It is not just the manufacturers though, it’s also the CDC, which has become a revolving door between Big Pharma executives and government officials.

The appointment of Robert Kennedy as the chair of the Commission on Vaccine Safety brings some hope that all of the revelations from whistleblowers like William Thompson and Andrew Wakefield might actually stand a chance of launching an investigation into vaccine manufacturers, and it might give the public the right to hold them accountable for their actions.

What the mainstream media is really saying in their reporting on this topic is, “How dare Donald Trump not elect another Big Pharma executive to this government position,” which is absurd.