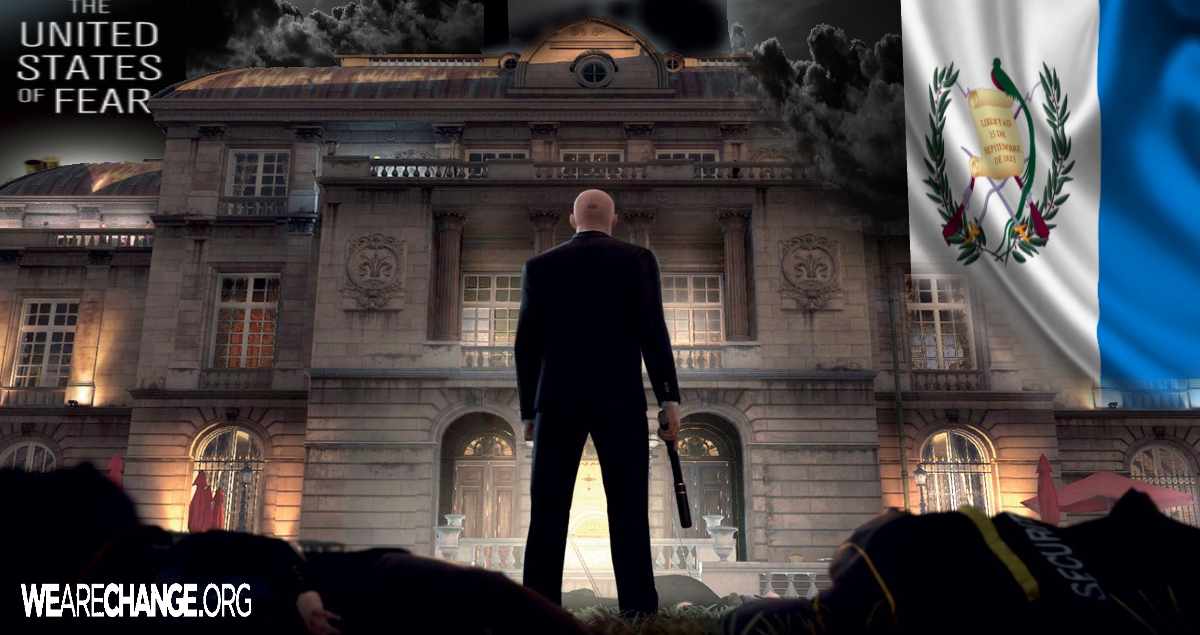 The Bitter Fruit Story; the CIA’s Coup d’etat of Guatemala, and the Assassination of A democratically elected president all for Standing Up to David Rockefeller. 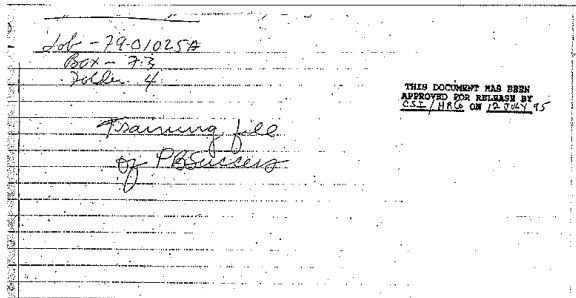 Cover page CIA transcript titled ‘A Study of Assassination’. This unsigned and undated (estimated publication date: Dec 31st, 1953) 19-page typewritten file was part of a collection of CIA documents pertaining to Operations PBFORTUNE and PBSUCCESS and was declassified under the Freedom of Information Act on May 15, 1997.

“In lost assassination, the assassin must be a fanatic of some sort. Politics, religion, and revenge are about the only feasible motives. Since a fanatic is unstable psychologically, he must be handled with extreme care. He must not know the identities of the other members of the organization, for although it is intended that he die in the act, something may go wrong. While the assassin of Trotsky has never revealed any significant information, it was unsound to depend on this when the act was planned.”

Now that we understand the motives, lets jump in and see what it really takes to be a government sponsored hitman (or hit-woman).

This study is pretty long (The government spared no expense when describing in detail the preferred methods of Assassination) For this article we’re just going to briefly summarize the subject matter of the document,  I do however recommend that you read the whole study through out to gain more complete understanding, of covert American deep state interventions.

A STUDY OF ASSASSINATION

“You know, I don’t know about this doctrine of assassination, but if he thinks we’re trying to assassinate him, I think that we really ought to go ahead and do it,” Robertson said. “It’s a whole lot cheaper than starting a war … and I don’t think any oil shipments will stop.” – USA Today (08/22/05) 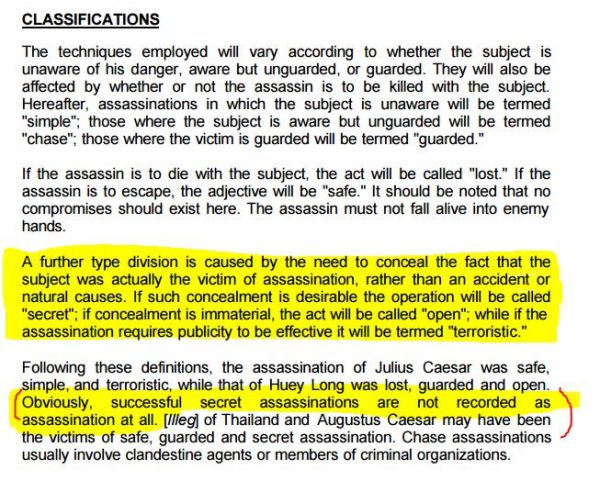 President Árbenz drowned in his bathroom in Mexico City, On 27 January 1971 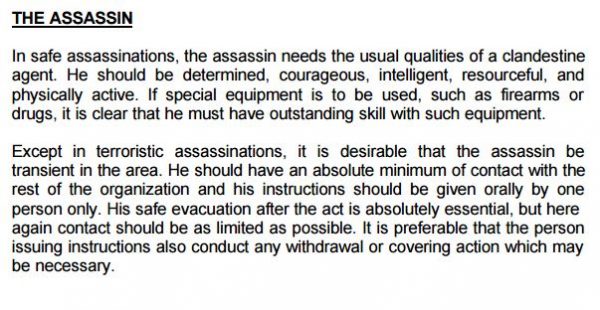 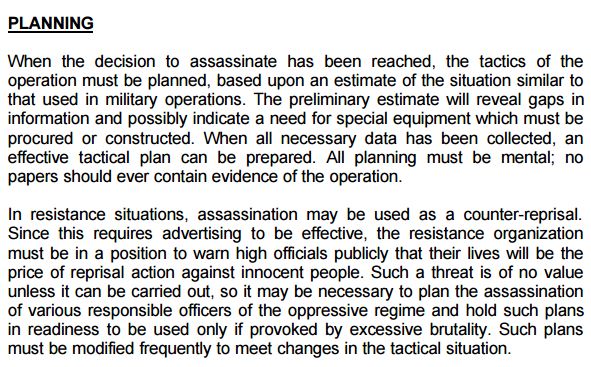 There are Several TECHNIQUES mentioned in the CIA’ assassination manual. The Following is a summery of a number of the methods listed in the 19 page study released via.the freedom of information act in 1997.[ PDF]

The essential point of assassination is the death of the subject. What other point would there be for an assassination?

A human being may be killed in many ways but sureness is often overlooked by those who may be emotionally unstrung by the seriousness of this act they intend to commit. The specific technique employed will depend upon a large number of variables, but should be constant in one point: Death must be absolutely certain.

Techniques may be considered as follows: 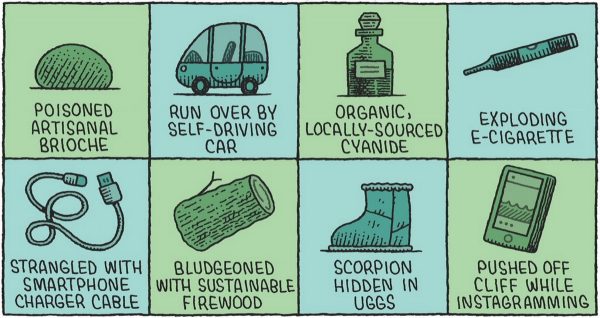 It is possible to kill a man with the bare hands, but very few are skillful enough to do it well. Even a highly trained Judo expert will hesitate to risk killing by hand unless he has absolutely no alternative. However, the simplest local tools are often much the most efficient means of assassination. A hammer, axe, wrench, screw driver, fire poker, kitchen knife, lamp stand, or anything hard, heavy and handy will suffice.

According to the DOC
The most efficient accident, in simple assassination, is a fall of 75 feet or more onto a hard surface.

Falls into the sea or swiftly flowing rivers may suffice if the subject cannot swim. It will be more reliable if the assassin can arrange to attempt rescue, as he can thus be sure of the subject’s death and at the same time establish a workable alibi.

An overdose of morphine administered as a sedative will cause death without disturbance and is difficult to detect. The size of the dose will depend upon whether the subject has been using narcotics regularly. If not, two grains will suffice.

Absolute reliability is obtained by severing the spinal cord in the cervical region, . This can be done with the point of a knife or a light blow of an ax or hatchet.

The most Shocking few pages of the document describe what the CIA called “the conference room technique” of assassination, with two or three man death squads preforming an orchestrated dance like maneuver of murder.

In these official Leaked drawings from the end of the FOIA released document, demonstrate how to kill people in n enclosed “conference room’ environment. Describing in startling step by step detail, a systematic method of assassination that appears eerily similar to the mass murder events in places like Sudan, Nigeria, and most recently Orlando Florida.  It goes into the detail of who stands where; where to shoot and how to cover your escape. 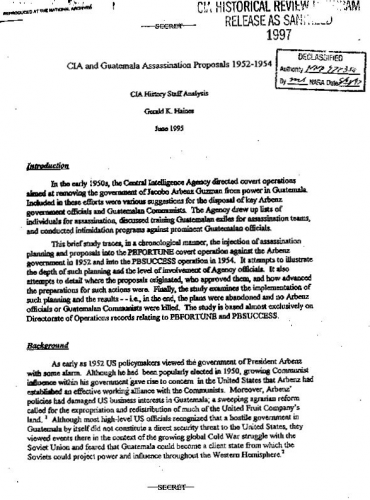 Now just think that this study was written up in the early 50’s. Imagine all the creative assassination methods our CIA has thought up since.

Thank you for reading, I hope that this article opened your eyes to the nature of CIA political assassinations, and taught you a piece of suppressed American history. If you like our Work Subscribe to our Social networks, Donate To help us Speak Truth to Power, and don’t forget to leave some propaganda, in the comment section below. 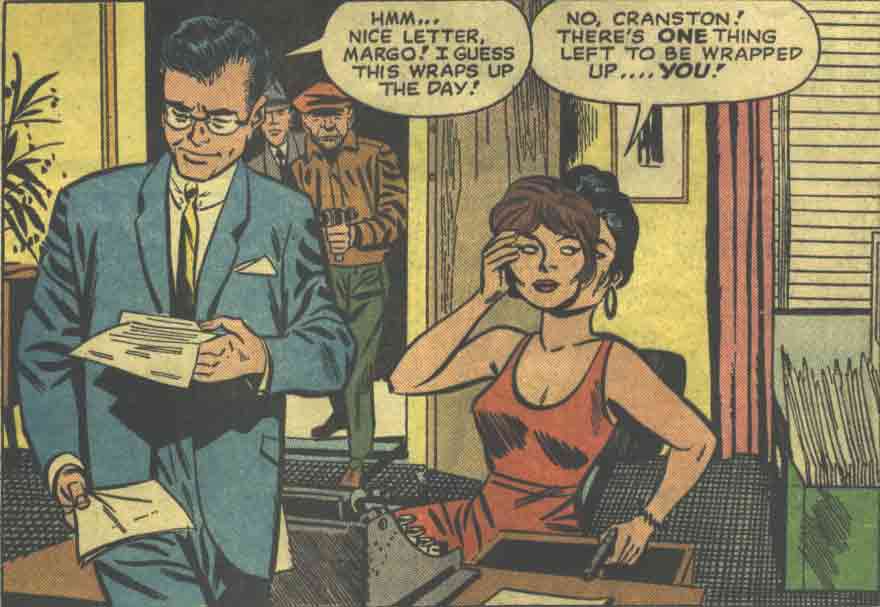 For additional reading on the history of the United Fruit Company: click here.

For more information and declassified documentation of U.S. involvement in Guatemala , see the following:

INTELLIGENCE OVERSIGHT BOARD,
REPORT ON THE GUATEMALA REVIEW – JUNE 28, 1996
Anthony S. Harrington, Chairman; General Lew Allen, Jr., USAF (Ret.);
Ann Z. Caracristi; Harold W. Pote [ed. this is a detailed article but
will give an idea of what the CIA has been up to more recently]
http://www.totse.com/en/politics/central_intelligence_agency/guatrvw.html

Is the CIA necessary?
http://www.mtholyoke.edu/acad/intrel/draper.htm