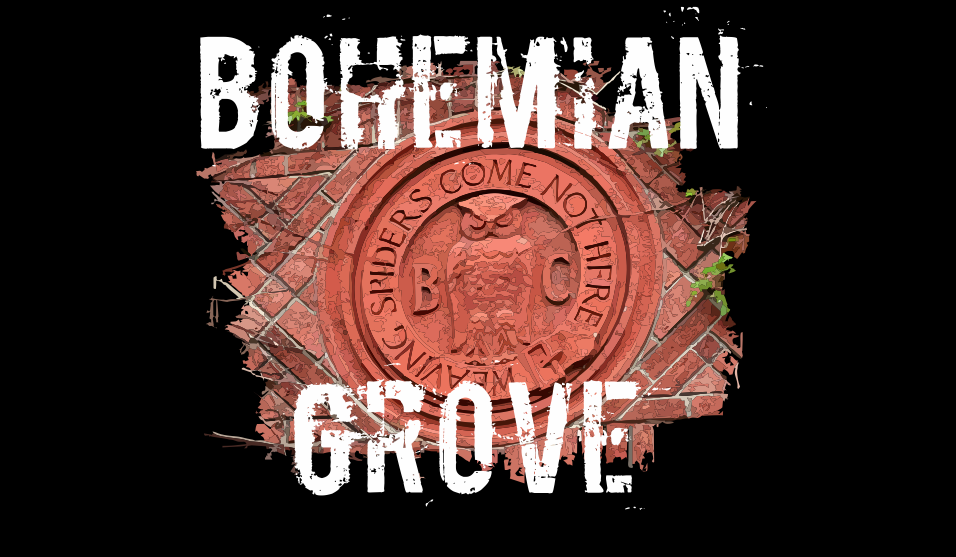 This WeAreChange infographic details the secretive Bohemian Clubs private campground the Bohemian Grove, where each year in July many of the elites of the United States meet for privately for upwards of two weeks.  Many strange rituals take place amongst the redwoods of California along with talks and discussions often of a political nature.

A larger more detailed version can be downloaded here as a pdf or you can download the high-res jpeg version here.

Luke has done a number of videos over the years on the Grove and other secret societies, they can be found here.

“Bohemian Grove is a 2,700-acre campground located at 20601 Bohemian Avenue,  in Monte Rio, California, belonging to a private San Francisco-based men’s art club known as the Bohemian Club. In mid-July each year, Bohemian Grove hosts a two-week, three-weekend encampment of some of the most prominent men in the world.”

“The Bohemian Club was formed in 1872. In 1878, 100 Bohemians gathered in the Redwoods for a send-off party and which then became the club’s yearly encampment. The group quickly relaxed its rules for membership to permit some people to join who had little artistic talent, but enjoyed the arts and had greater financial resources. Eventually, the original “bohemian” members were in the minority and the wealthy and powerful controlled the club.”
– Wikipedia

The club motto is “Weaving Spiders Come Not Here”,  it’s taken from Shakespeare’s A Midsummer Night’s Dream. It implies that outside concerns and business deals are to be left outside. When gathered in groups,  Bohemians usually adhere to the injunction, though discussion of  business often occurs between pairs of members. No Cellphones or Cameras  are permitted.

Picture from Summer 1967, those in the photo include both Ronald Regan, Richard Nixon, who met here before they went on to be Presidents.

Nixon even admitted in his memoirs that the  path to his presidency began with his visit to the Bohemian Grove. After 40 years of membership, the men earn “Old Guard” status, giving them reserved seating at the Grove’s daily talks. Former U.S. president Herbert Hoover was inducted into the Old Guard on March 19, 1953; he had joined the club 40 years previously. In his acceptance speech, Hoover compared the honor of the “Old Guard” status to his frequent role as veteran counselor to later presidents.

Bohemian Grove Cremation of Care ceremony where ‘mock’ sacrifices of children are given up to Minerva. The occult meaning of this ceremony seems clear. These men carry the cares of the world and use a symbolic ritual to cast it off.

At the edge of an artificial lake in the middle of the Grove, is a 40 foot owl that has been the centerpiece of a secret ceremony which takes place on the first night of the club’s annual encampment. Performed after dark in front of the members, a small boat crosses the lake towards a group of dark, hooded figures waiting at the owl statue with a High Priest who receives a human effigy from the ferryman, places it at the foot of the shrine, and sets it on fire.

The High Priest says, “The owl is in his leafy temple; let all with the Grove be reverent before him. Lift up your heads, O ye trees, and be ye lift up, ye ever-living spires. For behold, here is Bohemia’s Shrine and holy are the pillars of this house. Weaving spiders, come not here!”

“Nay, thou mocking spirit, it is not all a dream. We know thou waitest for us when this our sylvan holiday shall end. And we shall meet and fight thee as of old, and some of us shall prevail against thee, and some thou shalt destroy… But this, too we know: year after year, within this happy grove, our fellowship has banned thee for a space, and thy malevolence that would pursue use here has lost its power beneath these friendly trees. So shall we burn thee once again this night and in the flames that eat thine effigy we’ll read the sign: Midsummer set us free!”

As the ritual reaches it’s peak, the effigy is set on fire, screaming is played over the sound system, and once fully engulfed in flames, fireworks are set off and the crowd cheers.

The High Priest continues “Oh owl! Prince of all mortal wisdom. Owl of Bohemia, we beseech thee, grant us thy council.” A short song is then sung with lyrics that go: “No fire, no fire, no fire. Let it be kindled in the world where Care is nourished on the hates of men and drive him from this Grove. One flame alone must light this fire. A pure, eternal flame. At last within the lamp of fellowship upon the altar of Bohemia.”

Official membership info is rare, these are individuals who either known to have attended as a guest of a member or are official members.

The Grove serves as an informal evaluatory feedback process to the top socio-economic domestic and foreign policy councils in the United States. – Mark Dice

Every afternoon during the two week camp, a Lakeside Talk is given after lunch wherea political insider or industry leader gives a thirty minute speech in there area of  expertise. The speeches primarily revolve around political, economic, and business trends, and often include information that is typically not revealed publicly.

The group produces a yearbook of sorts every decade called the Annals of the Bohemian Grove, which are given out
to members. They occasionally make there ways to bookstores and collections  after estate sales.