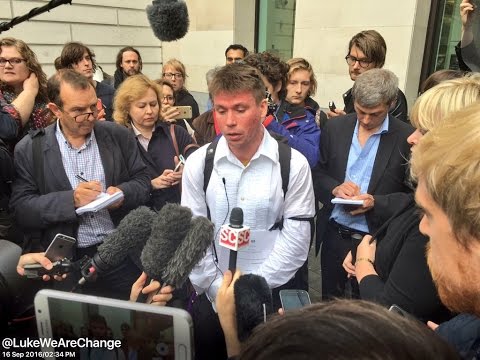 In this video Luke Rudkowski interviews Tor Ekeland, Lauri Love’s Attorney on the ground outside the Westminster Magistrates’ Court in London, England. Here the verdict has just been decided and read on the Lauri Love extradition case. Hacker Lauri Love, will be extradited to the United States where he faces 99 years in jail.

Lauri Love is facing extradition to the United States, and is potentially facing 99 years in jail, for a political motivated hack in honor and memory of the late great Aaron Swartz who faced unfair punishment. Love who tried to avenge fellow hacktivist Aaron Swartz will face similar punishment as Reddit founder Aaron Swartz.

Aaron Swartz, allegedly downloaded Gigabytes of academic articles from the Massachusetts Institute of Technology (MIT) and was charged with multiple violations of the Computer Fraud and Abuse Act, the U.S.’s controversial anti-hacking law that has been criticized to not have any . Facing 35 years in prison, Swartz hanged himself after cruel and unusual punishment.

Lauri Love, is a 31-year-old British hacktivist once affiliated with the Anonymous online collective.  Lauri will now face extradition where he will face trial for his alleged involvement in the hack in memory of Aaron Swartz. But according to Tor Ekeland “Lauri is going to appeal through U.K. counsel” so it’s not over yet.

Love is charged with his involvement allegedly as the leader in a series of hacks related  to the Anonymous operation #OpLastResort, in which a group of #Anonymous hackers wreaked havoc and destruction on a number of U.S. government websites and servers. They Additionally released a ransom file dubbed a “Nuke,” encrypted with a password that is said to have all that data that has never been released.

Operation Last Resort, also leaked the federal reserves owners names list during the 2013 super bowl, and other databases of the Army Corps of Engineers, Department of Energy, Department of Health and Human Services, Department of Defense’s Missile Defense Agency, and NASA, posting login credentials and d0xes of employees. Like Swartz, Lauri faces multiple charges under the CFAA (Computer Fraud and Abuse Act).  Legislation is so open ended that nothing is stopping U.S. attorney’s from prosecuting anyone over criminalizing them. Hackers face more time then murders, rapist and pedophiles, a clear change needs to be brought against this hacking a government business is not worse then raping someone, murdering someone, stabbing them to death or being a fucking filthy piece of shit child offender.

Lauri’s arguments against extradition from his lawyer and family include his medical conditions. His parents previously testified that Love’s been diagnosed with Asperger’s and depression, and that if he would be extradited to the United States he would become  a major suicide risk if given a long sentence in a foreign prison. #FreeLauriLove #FreeAllAnons

We will be here for you my friend fighting your extradition in spirit and using our online influence.