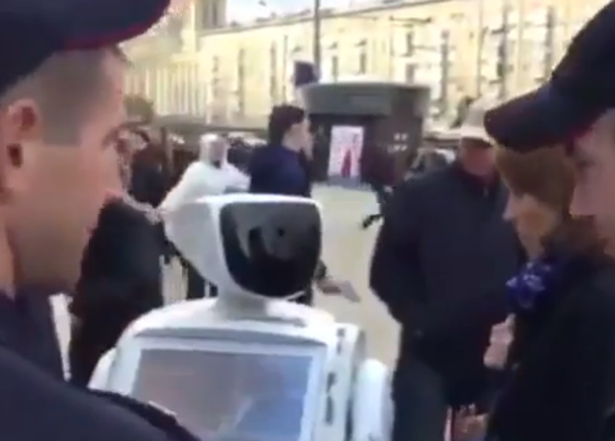 The now infamous Russian Promobot has been arrested. The robot that has escaped twice has now been handcuffed for allegedly “recording the opinions of voters on a variety of topics for further processing and analysis by the candidate’s team,” essentially cheating and being a public disturbance according to Russian authorities.

Months ago Promobot escaped and stopped traffic twice, now it’s managed to be the first known documented robot arrest in the world. Promobot was arrested by police at a political rally in Moscow, Russia, Viva la robot-lution!

Promobot was supporting it’s Russian candidate Valery Kalachev, recording voters opinions, when police are said to have handcuffed and dragged the machine away, according to witnesses on the scene Promobot did not resist arrest.

Promobot almost more then surely will face retaliatory action for this which means in robot language execution or deactivation, back to the drawing boards, or is that circuit boards? Something that it’s already faced the possibility of back in June, with Russian robot makers saying it’s love for freedom is a problem and they re-programmed him but he still seeks to cause trouble.

“We’ve cross-flashed the memory of the robot with serial number IR77 twice, yet it continues to persistently move towards the exit other robots don’t act the same way and generally toe the line by moving along their planned routes. We’re considering recycling the IR77 because our clients hiring it might not like that specific feature,”

The Promobot or IR77 is capable of thinking for itself and facial recognition, it also has a speech software analysis so it has a high tech artificial intelligence system. It learns from its experiences and its surroundings and is made for customer relations  designed to interact with humans. Promobot can answer individual questions, articulating answers.

It’s designers are intent on perfecting artificial intelligence saying back in June, that they are currently working on third generation robots that are planned to be launched this fall. Which may be pushed back further to iron out all the bugs.

“We are currently working on third-generation robots which we plan to launch in autumn. This is why we have given all the robots artificial intelligence (AI).”