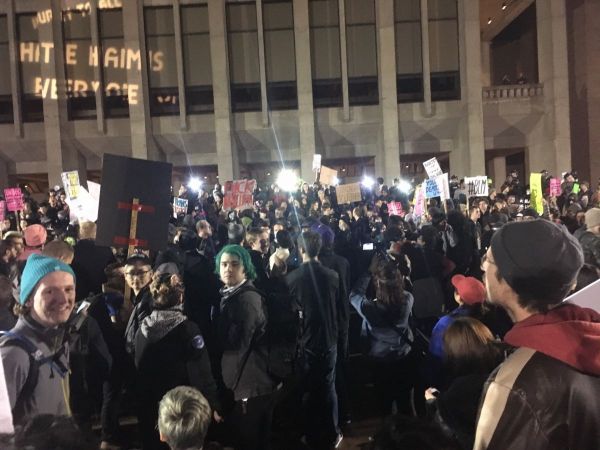 A man was shot Friday night during an event for Milo Yiannopoulos at the University of Washington in Seattle.

Officers working to remove one person with suspected gunshot wound to abdomen from crowd at UW campus demonstration. Developing.

Police working on a gunshot victim in Red Square. Hit in the stomach. We heard a muffled bang and commotion. #ANTITRUMPMVMT @KING5Seattle pic.twitter.com/VH8QYhnbTg

KIRO-TV reported that the man was taken to the hospital with a “possible life threatening injury” following the shooting.

According to the local CBS affiliate, protesters began arriving about two hours before Yiannopoulos was scheduled to speak at the event. The protesters began clashing with police, and they “threw rocks, fireworks, and other items at officers.”

Police clad in riot gear surround red square on the University of Washington campus after someone in the crowd of protesters was shot. pic.twitter.com/u7366x5SSo

Q13 Fox reported, “Hundreds of protesters had gathered at the UW campus” to oppose the event and “tensions grew as masked protesters attempted to block the doors to the building where Yiannopoulos was scheduled to speak, and others who had wanted to attend the speech.”

The Seattle Times reported that the gunman in the shooting is still at large, and police are currently searching for a suspect who fits the description of a 50-year-old Asian man who is approximately 5-foot-7 and 190 pounds.

Following the shooting, Yiannopoulos released a statement on his Facebook page:

“There was a shooting tonight outside my event at the University of Washington in Seattle, local police have confirmed. A man was taken to hospital with a potentially life-threatening wound to the abdomen. We don’t know any more at this time. My prayers are with the victim, whoever he is.”

*This story is breaking, stay tuned for updates*