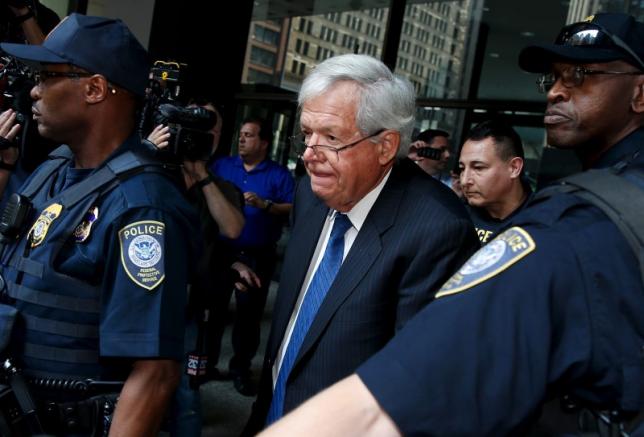 Imprisoned former House Speaker Dennis Hastert is reportedly demanding the return of the $1.7 million in “hush money” he paid to a man he sexually abused, after that man exposed him to the federal government.

Hastert is also demanding that the victim, referred to as “Individual A,” pay for his attorney fees. The demands from Hastert were made in response to a lawsuit filed by his accuser, who is trying to claim the rest of the money the politician promised him.

Hastert argued that the oral contract was breached when the man told the feds, which resulted in Hastert being investigated. He is now serving a mere 15-month sentence for the sexual abuse.

“To the extent any contract existed between plaintiff [Individual A] and defendant [Hastert], plaintiff breached that contract,” Hastert’s lawyers wrote. “Plaintiff’s breach of conduct resulted in damages to defendant and plaintiff is accordingly required to return $1.7 million to defendant.”

Hastert’s prison sentence began in June. Individual A is not the only one who Hastert is alleged to have paid, and he has a long history of abuse, according to FBI translator whistle-blower Sibel Edmonds, who is credited with breaking the real Dennis Hastert pedophile scandal story.

Individual A argued that Hastert agreed in 2010 to pay him $3.5 million if he did not disclose that Hastert molested him in the 1970s, when he was just 14 years old. Hastert never complied with that payment, and the man’s lawsuit argues that Hastert still owes him $1.8 million.

“Mr. Hastert has decided that rather than live up to his promise to compensate his victim for his molestation and resulting injury, he will ask his victim to pay him. He admits to agreeing to make payments but then denies that it is an agreement that he has to keep. His response is predictable and we look forward to entering the discovery phase of the case,” Browne said in a statement.