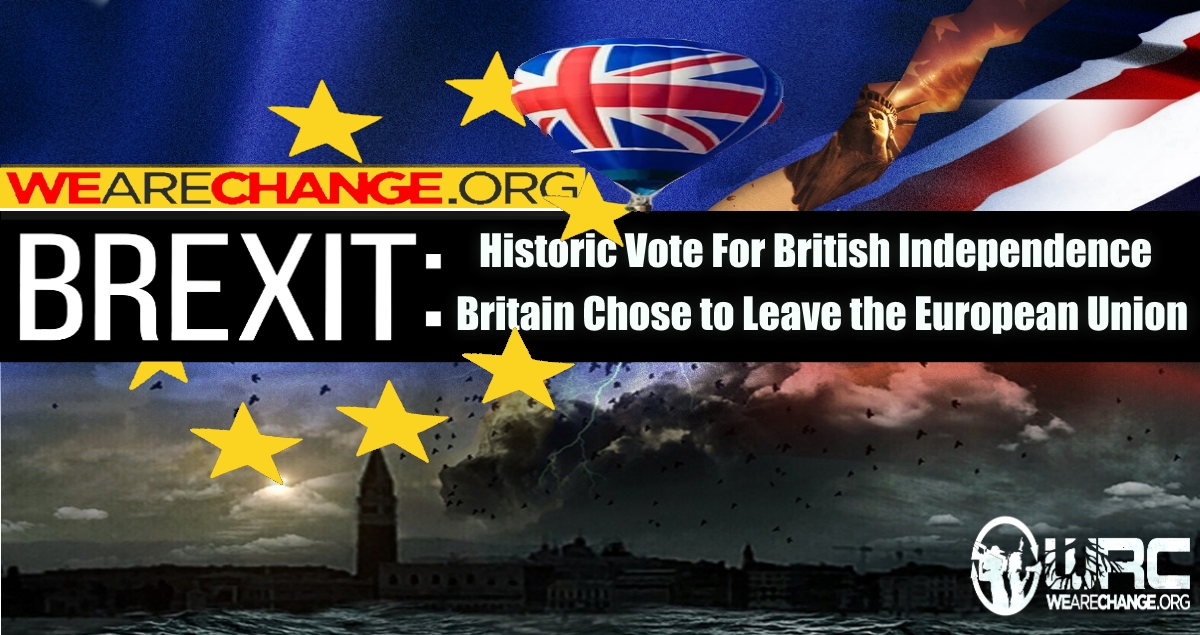 The UK has voted by 52% to 48% to leave the European Union after 43 years in an historic referendum, a BBC forecast suggests.

London and Scotland voted strongly to stay in the EU but the remain vote has been undermined by poor results in the north of England.

Voters in Wales and the English shires have backed Brexit in large numbers.

Having now declared results, 51.4% of the voters backed a Brexit versus 48.6% that favored to remain part of the union.

The pound had late Thursday jumped to as high as $1.5022 on early indications the U.K. had voted to stay in the bloc. However, as more local results were announced the vote swung in favor of the Brexiteers, and the The pound GBPUSD, -9.5132%  sank to $1.3971, down 5.9% from just before the polling stations closed at 10 p.m. London time, or 5 p.m. Eastern time. That would mark one of biggest losses for the pound since the peak of the financial crisis in 2008, and its lowest level against the dollar since 1985 as the markets reacted to the results.  Gold on the other hand, rallied 1.6% to $1,283.30 as investors rushed to find a safer place to hold their wealth. 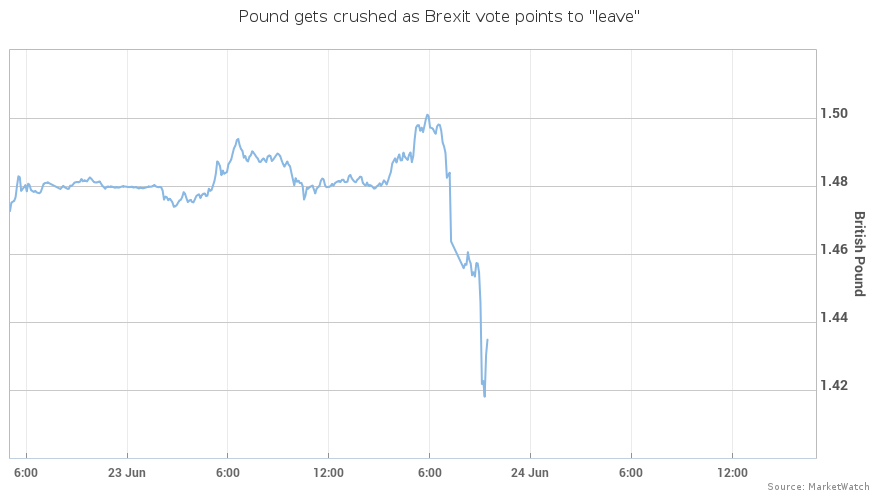 Labour’s Shadow chancellor John McDonnell said the Bank of England may have to intervene to shore up the pound, which lost 3% within moments of the result showing a strong result for Leave in Sunderland and fell as much as 6.5% against the euro.

According to a Labour source at the BBC: “If we vote to leave, Cameron should seriously consider his position.”

But pro-Leave Conservatives including Boris Johnson and Michael Gove have signed a letter to Mr Cameron urging him to stay on whatever the result.

Former Europe Labor Minister Keith Vaz told the BBC the British people had voted with their “emotions” and rejected the advice of experts who had warned about economic impacting of leaving the EU.

UKIP leader Nigel Farage – who has campaigned for the past 20 years for Britain to leave the EU – told supporters “this will be a victory for ordinary people, for decent people”.

Mr Farage – who predicted a Remain win at the start of the night after polls suggested that would happen – said Thursday, 23 June would “go down in history as our independence day”.

He called on Prime Minister David Cameron, who called the referendum but campaigned passionately for a Remain vote, to quit “immediately”. 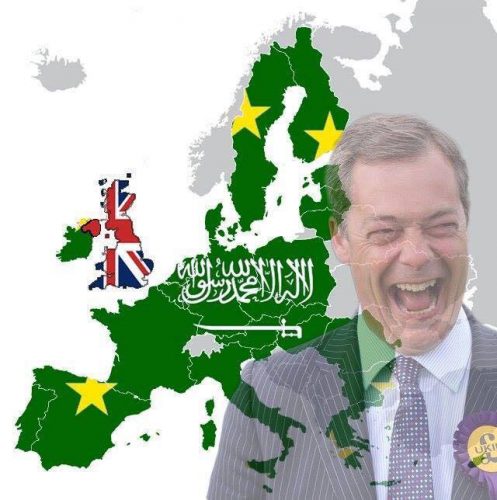 Nigel Farage: ‘Brexit without a single bullet being fired’

We will have done it without having to fight, without a single bullet having been fired.

I hope this victory brings down this failed projects and brings us to a Europe of sovereign nation states trading together.

Let June the 23rd go down in our history as our independence day.”

Cameron and Corbyn could both lose their jobs

Simon Danczuk, the Labour MP, tells the Telegraph in Manchester this morning that a vote Leave could see both David Cameron and Jeremy Corbyn losing their respective positions of leadership.

Asked if he thinks Cameron can stay on as Prime Minister, he says: “I think he’ll struggle actually- I think he’ll have to go.

“But there’s just a big a question over Jeremy’s leadership because part of the postmortem is doing to be about asking ‘why did we lose?’ A good proportion of the vote which should have kept us in should have been Labour voters which Jeremy failed to convert into Remainers.”

He says if there’s a snap general election the party will let Corbyn lose and then mount a leadership challenge.

“It will be all about timing won’t it”, he says. “If we are working towards a general election, the appetite in the parliamentary Labour Party will be to let Jeremy fight it, lose it, which he surely will- and then we will choose a new leader.”

He says the Labour leader has had “a very mediocre campaign really and our core voters in the North don’t connect with him and that’s not helped matters.”

A good swathe of people who should have been voting to stay in, because that’s better for the economy and their jobs, have voted against the mainstream parties.

“I think it’s a failure of politicians to not confront the issues continually raised on the doorsteps. Ed Miliband would not address immigration, Gordon Brown when he was Prime Minister was told not to talk about immigration, you can’t keep doing that and expect the public not to go in the opposite direction.”

How do you feel about Britain leaving the European union ? How do you think this will effect the Region and what effect will it have on the larger geo-political picture. We would like to know what you think, let us know in the comment section bellow, or on our social networks.