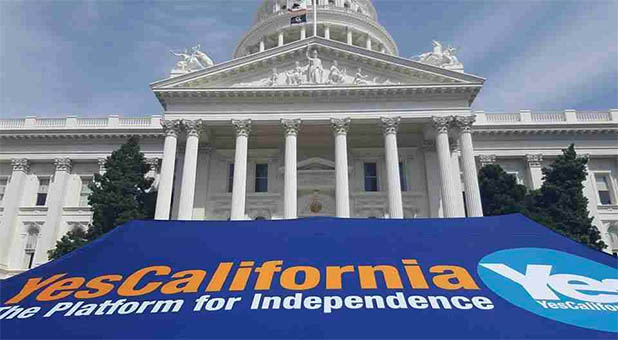 Activists in California have just taken an integral step that could leave America with only 49 states in the near future. Yes California, a pro-secession organization, received approval Thursday to begin collecting signatures from residents to put “Calexit” on the ballot for a 2019 special election.

Yes California has been working toward secession for some time, but with President Donald Trump’s election last year, their efforts gained momentum as frustrated residents questioned their willingness to bow down to a president they don’t support. According to a poll conducted by Reuters/Ipsos this month, nearly one in three supports secession — a sharp uptick from a similar survey conducted in 2014. With secession becoming a viable alternative, it’s possible that support may continue to grow.

The organization submitted their ballot proposal to California’s state government in November, and on Thursday, California Secretary of State Alex Padilla gave them the green light to begin collecting signatures. They need 585,407 people to sign their petition by July 25. If they succeed, the referendum will make it onto the 2018 ballot. If it passes, the state will hold a special election the following year. The Sacramento Bee reports:

Many Americans often joke about California leaving the union, highlighting how wildly different residents of the Golden State are from those of America’s heartland. Indeed, Yes California appears to agree.

“America already hates California, and America votes on emotions,” Marcus Ruiz Evans, one of the group’s founders, told the Los Angeles Times. “I think we’d have the votes today if we held it.”

“In our view, the United States of America represents so many things that conflict with Californian values, and our continued statehood means California will continue subsidizing the other states to our own detriment, and to the detriment of our children.”

It’s understandable why secession has become a proposed solution considering California has long struggled with many systemic problems. As Yes California points out:

“Although charity is part of our culture, when you consider that California’s infrastructure is falling apart, our public schools are ranked among the worst in the entire country, we have the highest number of homeless persons living without shelter and other basic necessities, poverty rates remain high, income inequality continues to expand, and we must often borrow money from the future to provide services for today, now is not the time for charity.”

Though Yes California points out practical reasons for secession, they also argue the underlying justification for their movement from a philosophical standpoint:

“However, this independence referendum is about more than Californiasubsidizing other states of this country,” they write. “It is about the right to self-determination and the concept of voluntary association, both of which are supported by constitutional and international law.”

“It is about California taking its place in the world, standing as an equal among nations. We believe in two fundamental truths: (1) California exerts a positive influence on the rest of the world, and (2) California could do more good as an independent country than it is able to do as just a U.S. state.”

California has the sixth largest economy in the world, bolstered by the film industry, Silicon Valley, agriculture, and the state’s biggest cash crop — cannabis — which voters legalized in November.

While the practical and philosophical reasons for secession are compelling, it’s doubtful many residents are looking beyond President Donald Trump. California leans heavily to the left, and Democrats hold a supermajority in both houses of the state legislature. California was largely responsible for Hillary Clinton’s popular vote victory.

Further, though Yes California stresses the importance of voluntary association, it’s doubtful an independent California government would asktaxpayers what programs they’d like to fund. Ultimately, though California as a country would certainly be beneficial for decentralization and localization efforts, it would operate as a government and, as such, force Californians to participate.

Nevertheless, the movement reflects undeniable divisions within the United States, especially in the era of Donald Trump. Other states are also eyeing secession, including Texas, Washington, and Oregon.

As Anti-Media observed shortly after the election:

“People are rioting and protesting over Trump’s win throughout California butcelebrating in Alabama, and against the backdrop of an ever-encroaching federal government, it appears these differences are growing difficult to reconcile.”

This article (Soon There Could Be Only 49 States in America) is free and open source. You have permission to republish this article under a Creative Commonslicense with attribution to Carey Wedler and theAntiMedia.org. Anti-Media Radioairs weeknights at 11 pm Eastern/8 pm Pacific. If you spot a typo, please email the error and name of the article to edits@theantimedia.org.