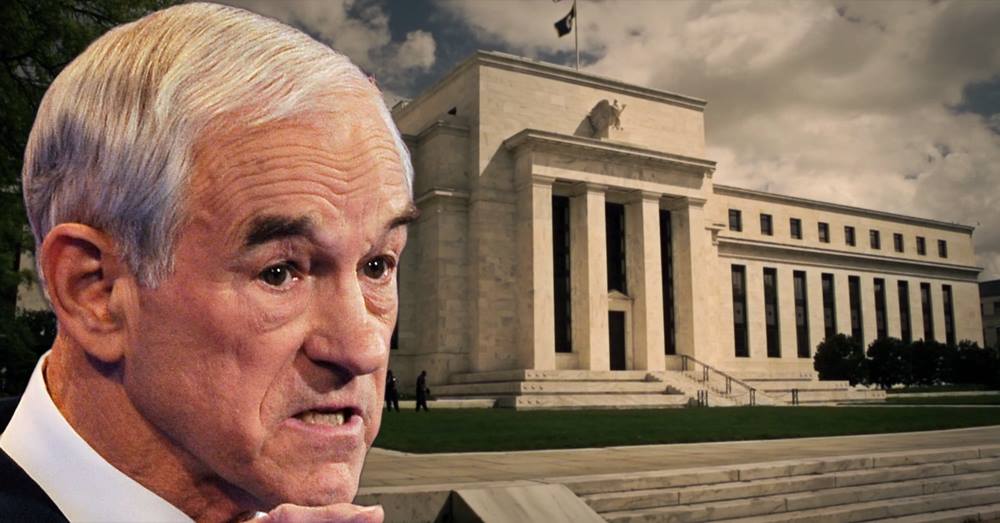 If former Rep. Ron Paul (R-TX) is correct, an Economic Doomsday is here. The second financial bubble is going to soon burst, and there’s nothing anyone can do about it. That’s because, as Paul stated, the Federal Reserve has set up the American economy for financial collapse for printing trillions of dollars back in 2008 and 2009.

“The Federal Reserve’s policies of printing trillions of dollars back in ’08-09 have locked into place a serious financial crisis at some point in our future,” Paul stated. Going so far as to intimate the financial collapse will occur at least some time in the next two years Paul wrote, “It’s unavoidable, and even Donald Trump can’t stop it.”

Paul said Trump will be the patsy for the supposed impending financial ruin. Just like everyone blamed Obama for the financial collapse in 2009, this time, “Trump will unfairly get the blame,” the former Texas representative wrote. Paul bases his comments on reports he says he’s read which concludes that within the next 18-24 months, the collapse will happen.

The former congressman further explained he’s still holding out hope for Trump to make changes which can help to protect America’s future, but pointed out some of Trump’s staff has direct connections to Wall Street. He’s also concerned Trump’s war against radical Islam is a war Trump cannot win because it’s a war against an ideology, much like America’s failed attempt at defeating communism.

Paul believes Trump’s moving in the right direction to protect America’s interests by canceling America’s involvement in the Trans-Pacific Partnership (TPP) trade agreement with Asia. Paul also hopes Trump will pull American troops out of the at least 7 countries in which it is currently deployed and engaged in military conflict. “I say just come home,” Paul said when addressing having our military presence overseas. “Just get out of there and let the local people sort (the conflict) this out,” Paul said in response to how America should deal with hot spots like the Ukraine and Syria.

Paul believes the former administration’s posturing and threatening of China was misguided and stated we’d be better of trading goods with China, and all of Asia, rather than trading threats. However, as te Free Thought Project pointed out, Trump is already carrying on this dangerous posture — and China is responding.

Paul warns there’s going to be an acceleration of black ops operations by the CIA and Special Forces missions such as the joint special operations command (JSOC) which, as The Free Thought Project has reported, answers directly to the President of the United States.

Paul, who has never supported Trump is concerned about Trump’s ego, wondering if he’s going to act on his impulses to go after the ideology of radical Islam. Paul reminded his viewers that the way to create more jihadists is to keep on provoking the moderate Muslims into becoming radicalized by reacting to U.S. military actions overseas — the exact same thing Trump is doing right now.

Paul praised President Obama’s actions to normalize relations with Cuba and he hopes that with all of the policy decisions the Trump administration is making, that Trump will maintain the policy Obama implemented with Cuba and continue to keep the negotiations open with our closest Southern Caribbean neighbor.

Paul noted that he thinks U.S. policy has created a “failed system” in the country. “All empires end and we’re the empire. It’s going to end and it’s going to be for economic reasons…we’re going to fail because we’re working within a failed system…this is a monetary problem…a spending problem…it’s going to be financial,” Paul emphatically claimed, once again stating the collapse of America is imminent. “We have something arriving worse than 2008, 2009, much worse…It was the fault of the Federal Reserve,” Paul said, adding, the Keynesian economic model contributed greatly to the first bubble burst. Paul said the left will blame Trump for it like the right did to Obama, but he says it’s bigger than the office of the president, and blames the federal reserve and the previous 17 years of governmental spending.

If you think Ron Paul’s comments hold no water, think again. As the Free Thought Project reported last year, even the former chairmen of the Federal Reserve is predicting this crisis.

We are in very early days of a crisis which has got a way to go,” asserted Alan Greenspan to Bloomberg last year. “This is the worst period, I recall since I’ve been in public service. There’s nothing like it, including the crisis — remember October 19th, 1987, when the Dow went down by a record amount 23 percent? That I thought was the bottom of all potential problems. This has a corrosive effect that will not go away. I’d love to find something positive to say…..I don’t know how it’s going to resolve, but there’s going to be a crisis.”

When the man who used to run the very central bank Ron Paul says is responsible for the collapse, also says there’s going to be a collapse — it’s time to pay attention.

This article first appeared on TheFreeThoughProject.com and was authored by Jack Burns.