Can Cell Phones Cause Cancer? The Answer is Yes 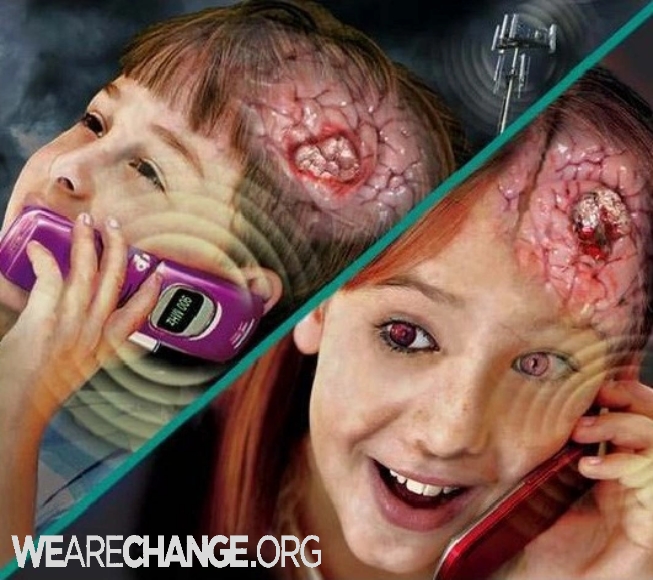 While the possible connection between cellphones and cancer is still considered a controversial subject, years worth of studies on cell phones and cancer have shown that there is a definitive connection between the risks of cancer and the electromagnetic radiation that’s being emitted by many of the popular objects that we use today — laptops, cell phones, and smart meters just to name a few.

After evaluating several studies on the possibility of a connection between cellphones, glioma and a noncancerous brain tumor known as acoustic neuroma, members of the International Agency for Research on Cancer — part of the World Health Organization — agreed that there is evidence that cellphone radiation contributes to cancer cell growth.

Although separately funded studies have yielded conflicting results currently there is no denying that exposure to Electro-magnetic frequencies does contribute to cancerous cell growth.

In this video Dr. Devra Davis, author of “Disconnect–The Truth About Cellphone Radiation,” and hundreds of other publications, explains how the biological impact of a cell phone is not related to it’s power, as many assume, but rather to the erratic nature of its high frequency radio signal, and its ability to disrupt the body’s natural resonance and interfere with DNA’s ability to repair. This, according to Dr. Mercola of mercola.com, is the most plausible theory for understanding the wide array of health impacts that have been discovered — including cancer.

Children and Teens are the most at risk

Children and teens are at greatest risk—both for parotid gland tumors and brain tumors. Because of their thinner skull bones which allow for greater penetration of cell phone radiation. The radiation can enter all the way into their mid-brain, where tumors are more deadly. In addition, children’s cells reproduce more quickly, so they’re more susceptible to aggressive cell growth. Children today also face a lifetime of exposure. According to Professor Lennart Hardell of Sweden, “those who begin using cell phones heavily as teenagers have statistically 4 to 5 times more brain cancer then adults”

Pregnant women should also avoid cell phones as much as possible. In 2008, researchers analyzed data from nearly 13,000 children and found that exposure to cell phones while in the womb was linked to behavioral difficulties. Using handsets just two or three times a day during pregnancy was enough to raise the risk of their babies developing hyperactivity and difficulties with conduct, emotions, and relationships by the time they reached school age—and the risk became even greater if the children also used the phones themselves before the age of seven.

Overall, the study revealed that mothers who used mobile phones were 54 percent more likely to have children with behavioral problems. 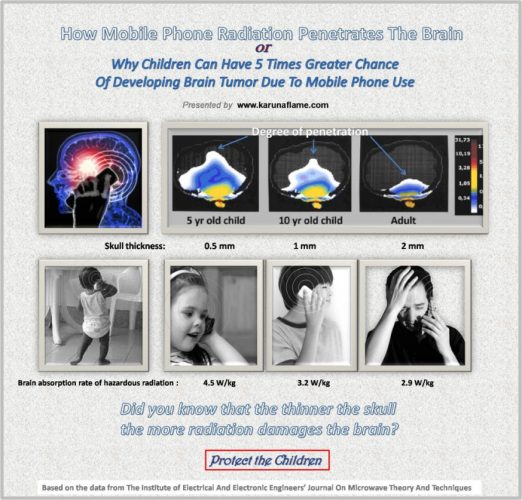 Much like the Tobacco, pharmaceutical, and GMO industries before them, the telecommunication corporations seek to discredit any data connecting their product and its byproduct to the statistical rise in specific cancers, like parotid gland tumors which has seen a four fold incress over the last 30 years. (Your parotid gland is a type of salivary gland, located closest to your cheek—the same area where most people typically hold their cell phones.) University researchers in Israel found a 400% increase in number of parotid gland cancers from 1970 to 2006, while rates of other salivary gland cancers remained stable.

In 1993, the cell phone industry was pressured by Congress into investing $28 million dollars to study cell phone safety. The cause of this sudden concern was massive publicity about a lawsuit filed by Florida businessman David Reynard against cell phone manufacturer NEC. Mr. Reynard’s wife, Susan, died of a brain tumor, and he blamed the frequent use of her cellphone for her death. Reynard revealed the suit to the public on the Larry King Live show, complete with dramatic x-rays showing the tumor close to where Susan held her cell phone to her head for hours each day. The next day, telecommunications stocks took a big hit on Wall Street and the media went into instant spin control. The industry trade association at the time, (TIA), went into crisis mode, claiming thousands of studies proved cell phones were safe and what Reynard and his attorney said was not verifiable. The TIA reassured the public that the government had approved cell phones, so that meant they were safe. The media demanded to see those studies, but, according to Dr. George Carlo, PhD, an epidemiologist and medical scientist who headed the first industry-backed studies into the dangers of cell phone use from 1993 to 1999 —

“Industry-funded studies in many cases now produce industry-desired outcomes. By tampering with the integrity of scientists, scientific systems and public information steps over the lines of propriety that are appropriate for protecting business interests—especially when the casualty of the interference is public health and safety.”

Dr. Siegal Sadetzki, the principal investigator of a 2008 study, testified before the U.S. Senate that cell phones were identified as a contributor to salivary gland tumors.  Dr. Martin Blank, one of the most experienced researchers of the cellular and molecular effects of electromagnetic fields in the U.S., gave a speech at the November 18, 2010 Commonwealth Club of California program, titled “The Health Effects of Electromagnetic Fields.”  In it, he explained why your DNA, with its ‘coil of coils’ structure, is especially vulnerable to electromagnetic fields of all kinds. Calling sustained exposure to EMF’s “an issue of great concern.”

Olle Johansson associate professor at the Experimental Dermatology Unit, Department of Neuroscience, Karolinska Institutet, in Stockholm, Sweden, is a leading authority in the field of EMF radiation and health effects.

On May 31, 2011, the World Health Organization (WHO)/International Agency for Research on Cancer (IARC) issued a report admitting cell phones might indeed cause cancer, classifying radio-frequency electromagnetic fields as “carcinogenic to humans” placing them into the same category as lead, engine exhaust, and chloroform.

So what can we do about it ?

If you’re concerned about the possible link between cellphones and cancer, consider limiting your use of cellphones or use a speaker or hands-free device that places the cellphone antenna, which is typically in the cellphone itself, away from your head and face. Use a Land Line at home and at work. In all ways try to Reduce or Eliminate Your Use of Other Wireless Devices, Avoid Carrying Your Phone on Your Body, never assume one cell phone is safer than another, use protective cases and mats if you are carrying a smart phone tablet or when placing a laptop on your legs, use safer technology like headsets and ear buds,  and remember to respect others opinions and be courteous to others who are more sensitive to the effects of electromagnetic radiation.

WeAreChange has found many products being sold that claim to help block EMF radiation, such as orgone. We will continue to look into possible solutions, and we will always listen to evidence provided by you, the reader.

Thank you for Visiting