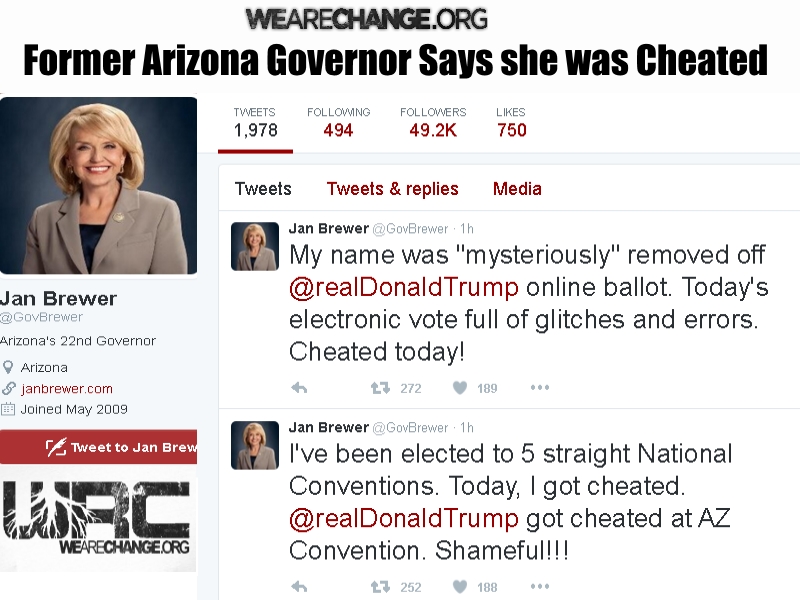 AZ, Jan Brewer the most recent current or former executive to endorse Donald Trump cries foul at the Arizona Republican convention, after Texas Sen. Ted Cruz won a large majority of the 58 delegates to the Republican national convention during a state party meeting. Tweeting after that “My name was “mysteriously” removed off @realDonaldTrump online ballot. Today’s electronic vote full of glitches and errors. I was Cheated today!

I've been elected to 5 straight National Conventions. Today, I got cheated. @realDonaldTrump got cheated at AZ Convention. Shameful!!!

Trump campaign chair Jeff DeWit angrily yelled “Trump got cheated” after it became clear that delegates to Saturday’s state party convention had elected Cruz for virtually all the 28 at-large national delegates. The two split the 27 delegates elected by congressional district. When Former Gov. Brewer failed to win a delegate seat at July’s convention she was visibly angry, saying that  “she got cheated” calling the Convention. Shameful both publicly at the event, and then later on her Twitter account.

Mr. release the 28 pages on NBC’s 60 mins party chairman Robert Graham said “the election [was] ran correctly and that DeWit and Brewer were making unsupported accusations.

Ted Cruz’s campaign organizer Constantin Querard says that simple math led to the at-large victory. Cruz offered a nearly identical slate of candidates as John Kasich backers and the combined votes led to a win. Implying to Cruz and Kasich supporters, that their previous political partnership was paying off.

Either way the elected delegates will be bound to vote for Trump on the first ballot in July’s national GOP convention regardless of Saturday’s results.

WeAreChange.org is currently looking for Sponsors to Help Support the Effort to get @Luke Rudkowski out to Germany to cover Bilderberg 2016