“Capitalism v. Socialism for Dummies”… This Is Brilliant 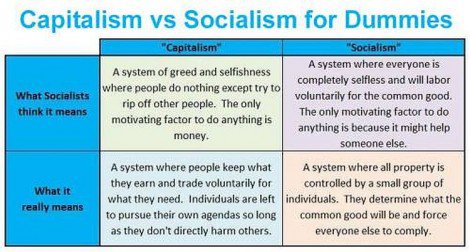 The simplest explanations are often the most correct, as is with this simple explanation for socialism.

With the campaigns of Donald Trump and Bernie Sanders for president, the backgrounds of the two men clashing have inspired a conversation about the economic identity of the United States.

Even those who don’t support Trump support how he got to be so wealthy and powerful. As a member of the dreaded “1%,” his very existence is offensive to Democrat presidential candidate Bernie Sanders and his supporters.
Academically, socialism works. Without greed, jealousy, a competitive spirit, and other emotions that make up the complexities of the human spirit, it’s accepted by most experts that a system of a tyrannical form of socialist government functions.

The idea, though, that all individuals will be satisfied with their own possessions regardless of how hard they work, and that others should determine what they earn based on a collective need, is rejected through so many living examples of failed government.

The table offers all of this in the form of an easy to read, easy to understand, and easy to distribute graphic.

Doing your part may not require picking up a gun, but rather to wage war on lies through the spread of truth and information.