Drug Warriors Will Pay 3.6 Million For Maiming A Toddler 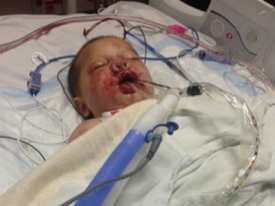 The parents of a toddler who was maimed by a botched Georgia drug raid in May 2014 have reached settlements with the last two plaintiffs facing claims as a result of the shocking home invasion. On Friday a federal judge approved payments totaling $1.65 million by Rabun and Stephens counties, which participated in the anti-drug task force responsible for the late-night, no-knock raid that nearly killed 19-month-old Bounkham “Bou Bou” Phonesavanh when a flashbang grenade exploded in the portable playpen where he was sleeping. The boy’s parents, Bounkham and Alecia Phonesavanh, had earlier reached settlements totaling almost $2 million with Habersham County and the city of Cornelia, which also particpated in the operation.

“The legal part is over, but the medical and emotional consequences will be with [the Phonesavanhs] the rest of their lives,” the family’s lawyer, Mawuli Davis, told The Atlanta Journal-Constitution. Bou Bou, who was severely burned and mutilated by the explosive device, has had to undergo a series of reparative operations that will continue into adulthood. “He’s got a painful road ahead,” Davis said. “The whole family, they still struggle with the trauma of what they went through, and every medical procedure is a reminder.”

The raid, which was aimed at Bou Bou’s cousin, a suspected methamphetamine dealer, discovered no drugs, no weapons, no drug money, and no suspects. The cousin was arrested later that day without incident at a different location. In October 2014 a Habersham County grand jury blamed the horrifying incident on a “sloppy” and “hurried” investigation but declined to approve charges against Charles Long, the deputy who threw the grenade that nearly killed Bou Bou, or any of the other officers involved. Last December a federal jury acquitted Nikki Autry, the only officer to be prosecuted as a result of the incident, of civil rights charges based on crucial misrepresentations in her application for the warrant authorizing the raid.