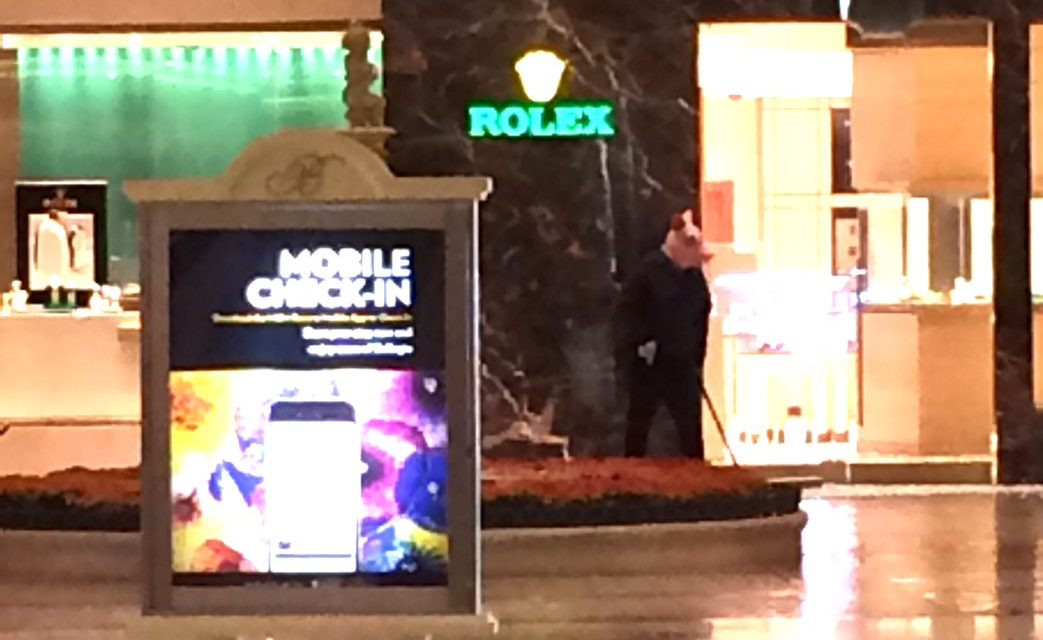 An ‘active shooter’ was reported inside the Las Vegas’ Bellagio hotel by several patrons.

Panicked guests tweeted how they were forced to flee and hide under tables as the shooting broke out at around 1 a.m. pst.

Reports from the scene suggest the shooting was linked to an attempted armed robbery on a Rolex store inside the complex.

Witnesses on the scene spoke of the chaotic scenes in which people were trampled as they attempted to escape the venue.

At least two men are said to have stormed the upmarket store armed with guns and sledgehammers.

One hotel guest @JillyJill wrote on Twitter: “Omg mass panic at Bellagio. A fight and Or shooting. Everyone running. I’m currently ducked on the floor under a table.”

Now I'm hiding with several guests in an emergency exit stairwell. All I heard was shots an waves of ppl running yelling RUN RUN! #bellagio

“Now I’m hiding with several guests in an emergency exit stairwell. All I heard was shots an waves of ppl running yelling RUN RUN!”

Bruh i think there was just gunshots at the bellagio. Wow man wtf. Me and Bee made it back to room. Everyone ran. What theeeee fuckkkkkkj

One man was captured on camera wearing a pig mask and holding a weapon police have now placed the scene on lockdown. In a video posted to Twitter dozens of police cars are seen gathered outside the famous venue. The woman who captured the man in a pig mask on camera further said that the man was apprehended by police shortly after.

Literally just witnessed an armed robber in a pig mask at a Rolex store at the Bellagio & then his arrest #bellagio #vegas #rolex #robbery pic.twitter.com/m53T6bHS2z

A spokesman for the Bellagio said no-one had been injured but refused to give more details on the incident the Independent reported.

Police denied initial reports that there was an active shooter calling the accusations false.

Currently investigating burglary at @bellagio. Initial reports indicated there was an “active shooter” which was false. NO injuries.

(THIS IS A DEVELOPING STORY CHECK BACK FOR UPDATES.)