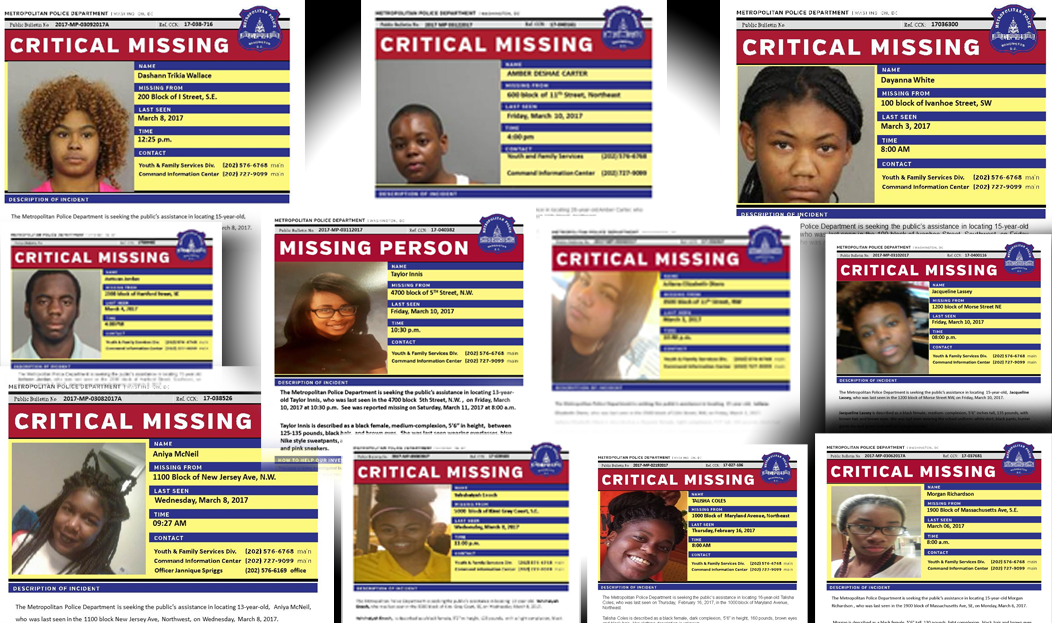 There is a recent string of missing people reports in Washington D.C., and locals of the area are furious that these reports seem to be increasing. Crime reports on the official DC Metropolitan Police Department crime report page don’t give us any information on kidnappings, but their Twitter page seems to say otherwise.

In the past two days alone, there have been at least 8 missing people, as reported from the DC Metropolitan Police Department’s Twitter page.

The official Missing Kids website has surprisingly stayed silent on the matter. There have reportedly been 500 missing children in D.C. in 2017, at least 20 in the past week alone, according to the DC police twitter page. Also during the past week, 14 missing people have been found

None of the missing people are on the official site for locating missing children.

@llcoolj We need to apply public pressure and post these innocent faces everyday until all of them are found#MissingDCGirls@DCPoliceDept pic.twitter.com/dN64IIg6wd

Some of the children above have since been found by authorities, including Edwards, Paz, Coles, and White. The rest of the girls pictured above still seem to be missing, along with various others. The DC police Twitter page seems to keep followers up-to-date on the missing people.

Missing Person: Dayanna White,15, has been located. Thanks for your help! #MissingPersonLocated pic.twitter.com/j456pyt7XS

According to a report by USA Today, police officials have been downplaying the fact that there are children missing, saying that the numbers have dropped from 200 a month to 190 a month, on average. Although summarized crime reports for 2014-2015 echo this claim, there were only 27 kidnapping arrests made during this time alone.

Regardless, these are people’s lives that we are dealing with here, and not pieces of data. We shouldn’t look at kidnappings from a statistical point of view, and should instead recognize that there are people’s lives at stake here.  In a time of increasing reports of international sex-trafficking, these kidnappings need to be solved, and not set aside.

What seems to be causing most of the controversy is that the majority of these missing people are either African American or Hispanic. Black lawmakers have recently called upon the FBI and Department of Justice for assistance in this matter, which illustrates lessening confidence in the local police department.

14 black girls go missing in 24 hrs & I have to rely on Black Twitter to get info cuz mainstream media's too busy to care. #missingdcgirls