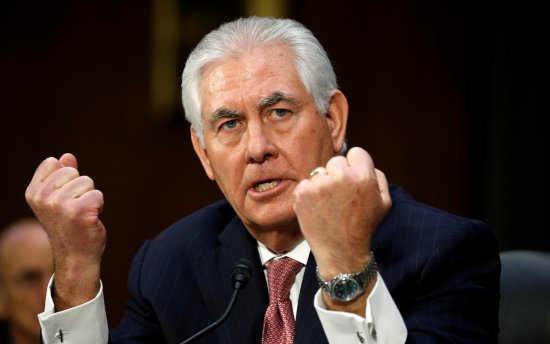 In response to Rex Tillerson’s comments about China being a threat to the United States, a state-run Chinese media outlet released a statement Friday warning that the Trump administration should “prepare for a military clash.”

In Tillerson’s confirmation hearing for secretary of state on Wednesday, he criticized Iran, China, and Russia as being “threats” to the U.S. He specifically called out China, saying that the country is “declaring control of territories that are not rightfully China’s.” He compared China’s deployment of military to other islands, to Russia’s annexation of Crimea.

“The island building in the South China Sea itself in many respects in my view building islands then putting military assets on those islands is a kin to Russia’s taking of Crimea,” Tillerson said.

The poorly worded response is one that can be taken as Tillerson’s intention to call for a blockade of the South China Sea manmade islands. However, doing so would almost certainly cause war between the U.S. and China, as it is already very delicate situation.

In an aggressive editorial in the Global Times, the author accused the former ExxonMobil chief executive of “rabble-rousing.”

“The US has no absolute power to dominate the South China Sea. Tillerson had better bone up on nuclear power strategies if he wants to force a big nuclear power to withdraw from its own territories,

If Trump’s diplomatic team shapes future Sino-US ties as it is doing now, the two sides had better prepare for a military clash.

China has enough determination and strength to make sure that his rabble rousing will not succeed. Unless Washington plans to wage a large-scale war in the South China Sea, any other approaches to prevent Chinese access to the islands will be foolish.

“It is hoped that Tillerson will desire a productive partnership with China more and his harsh words are just coaxing the Senate Foreign Relations Committee.”

However, China’s foreign ministry has expressed the exact opposite with a spokesman for China saying that geopolitical relations are dependent upon “non-confrontation, non-conflict, mutual benefit and win-win cooperation,” Lu Kang Lu  said.

Analyst Bonnie Glaser told Business Insider that she believed Tillerson misspoke, and his words were taken out of context.

“He was not speaking with notes in front of him, and this is not an issue I think he is very well versed in. He may know oil in the South China Sea, but I’m hearing from some people on the transition team that he misspoke,” Glaser said.

But it’s hard to take the following out of context when Tillerson literally said, “You’re going to have to send China a clear signal that first the island building stops, and second your access to those islands is also not going to be allowed.”

The Chinese state-owned China Daily followed up with an additional warning that, “It would set a course for devastating confrontation between China and the US.”

A UN tribunal ruled last July that China held no legal claim to the controversial disputed islands ruling in favor of the Philipines. A few later, Russia and China held joint military drills around the islands in a display of force.

Last month, China stole a U.S. submarine drone that was in the south china sea and later returned it a few days later.