How The CIA vs Donald Trump War Is Just Getting Started 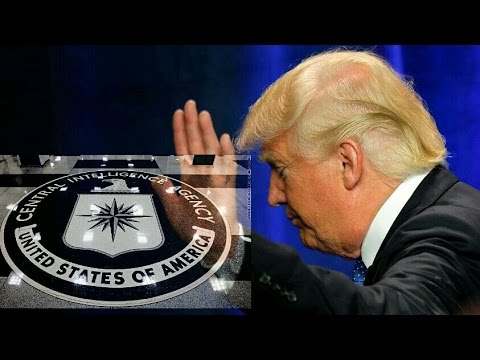 Just when you think things can’t get crazier with Donald Trump, they do! With these latest developments from the CIA and from U.S. representatives, we are seeing the early signs of an all-out war between the president-elect and the Central Intelligence Agency.

Recent comments from Sen. Chuck Schumer during a recent interview with Rachel Maddow on MSNBC reveal everything you need to know about what is currently happening behind the scenes in Washington D.C.   “When you take on the intelligence community, they have six ways from Sunday getting back at you,” Schumer said. “Even for a practical, supposedly hard-nosed businessman, it is being really dumb.”

Did anyone else catch the fact that with that Schumer is essentially saying that if Trump dares to challenge the CIA, it will retaliate against him?    Of course, if you know the true history of the CIA, you know that their reputation is incredibly low as it is, because they create clandestine operations that overthrow democratically elected leaders. They sabotage governments, they sabotage policies, they work for global elites and they torture people. They are known for doing god-awful things in secret, and getting away with it because of their power.

Following Schumer’s hints that the CIA would retaliate against Trump, former CIA Director James Woolsey announced that he is quitting Trump’s transition team. Many people questioned why he was there in the first place. He is a neo-conservative who pushed for war in Iraq, blamed Iraq for 9/11, and was a key member of the Project for the New American Century. Woolsey is also adamantly against WikiLeaks and Julian Assange, and when I confrontedhim about Operation Mockingbird in 2011, he lied through his teeth.

This all comes as a “hyped up” Senate hearing on alleged Russian hacking failed to lead to any concrete evidence. While there was no evidence presented confirming that the Russian government was involved in the U.S. election, they did provide information on some Ukrainian malware code, which could have been purchased by anyone anonymously online.

Director of National Intelligence James Clapper added to the fear campaign on Thursday, when he testified before the Senate Armed Services Committee, and said that the alleged Russian interference went far beyond a cyberattack.

“While there has been a lot of focus on the hacking, this is actually part of a multifaceted campaign that the Russians mounted,” Clapper told the committee.

In addition to all of the disinformation, we’re learning that the FBI is blaming Russia when they haven’t even examined the DNC servers, and instead relied on a report produced by a DNC contractor.

What we’re seeing is very clear. We’re seeing the CIA, a clandestine group that has committed horrible atrocities all over the world in secret, versus Donald Trump, a very strong personality who has not backed down. There will be a confrontation, and we will be covering exactly what happens when these two forces collide.