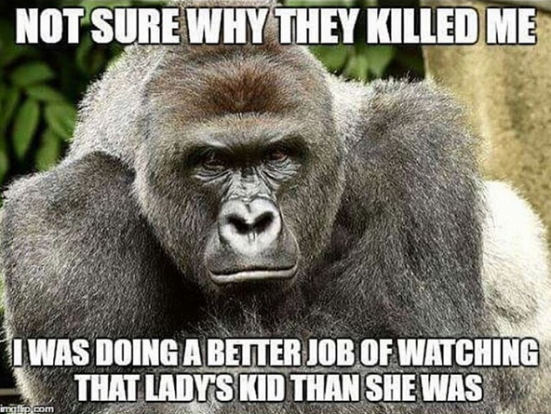 The Cincinnati Zoo has announced that they are “not amused” by the wave of memes celebrating their deceased silverback gorilla Harambe, after a hacker took over their director’s Twitter account in honor of the majestic animal. 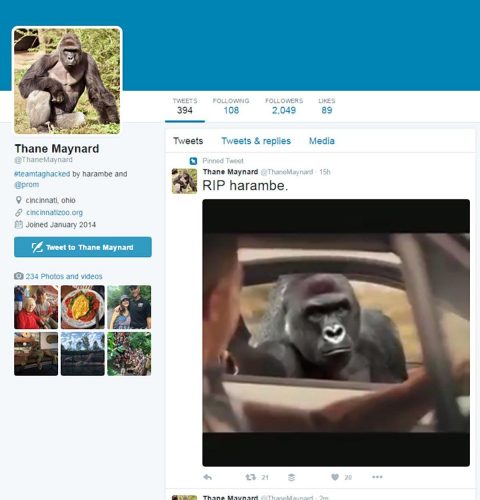 The Twitter account belonging to zoo director Thane Maynard was hacked on Saturday evening and was quickly morphed into a shrine to Harambe. This included replacing Maynard’s photo with one of the beloved gorilla and sending out several tweets with the popular hashtags “#DicksOutForHarambe” and “#JusticeForHarambe.”

“Harambe – 1 Cincinnatizoo – 0,” one of the now-deleted tweets read.

By Sunday, Maynard still had not regained control over his account and the hacker claimed to be Twitter user @prom, who goes by the name “Bones” on the platform.

“Okay. If @CincinnatiZoo want their directors twitter back, they can dm me on @prom. I’ve had my fun,” the account tweeted.

When asked by the New York Daily News why he hacked the account, Bones stated that at “the time when it actually happened I was kinda angry at the dude who shot him,” and that he had “been sorta planning it here and there.”

The Cincinnati Zoo is not amused, however, and Maynard has stated that the jokes are very upsetting because the “zoo family is still healing” from the loss.

they call it gorilla glue because harambe was metaphorically the glue that held this nation together pic.twitter.com/IMO9iM2uLk

Harambe has managed to become an internet legend, with no signs of slowing down. He is currently tied in the presidential race with Green Party presidential candidate Jill Stein in Texas and a petition to rename the Cincinnati Bengals to the Cincinnati Harambes has amassed over 20,000 signatures.

In fact, Google searches for Harambe are back to being nearly equal to what they were during the first week of June when he was killed.

“We are not amused by the memes, petitions and signs about Harambe,” Maynard told the Associated Press. “Our zoo family is still healing, and the constant mention of Harambe makes moving forward more difficult for us. We are honoring Harambe by redoubling our gorilla conservation efforts and encouraging others to join us.”

Harambe was brutally shot and killed at the Cincinnati Zoo in May after the child’s parents failed to supervise their toddler and he fell into the glorious creature’s enclosure. The incident was captured on video by a witness and rapidly went viral.

This is by far the best one yet pic.twitter.com/oveTS3fZtu

As for the chances of people listening to Maynard’s plea and ceasing to meme Harambe? Let’s just say he must be new here.