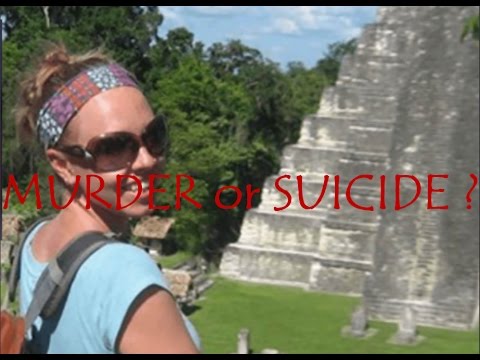 She died a few days ago under suspicious circumstances.

Her friends on Facebook are looking for answers. Several close friends have made mentions on various Facebook posts that friends and family have no clear understanding of what happened to Monica except that she died on Sunday. At least one friend of hers claims Monica was murdered: http://imgur.com/a/GXWrN 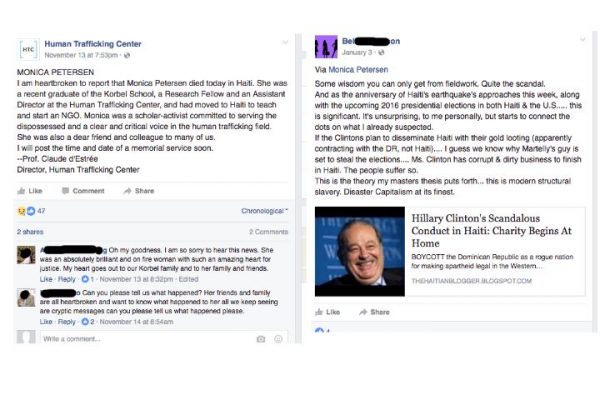 Earlier this year a friend of Monica re-shared a post where Monica linked to a blog post critical of Hillary Clinton’s dealings in Haiti!! She was likely on to something, very likely that when she found out about #PIZZAGATE flags were raised and she began to further put the pieces together. The linked She posted was from Thehaitianblogger entitled “Hillary Clintons scandalous condut in Haiti: Charity begins at home“.

The blog article talks about the Clinton’s rigging the 2011 Haitian election so that her brother Tony Rodham and “a company that barely exists.” got a “sweetheart gold mine concession in Haiti” that “royally cheated” the nations people. It also mentions how the Clinton foundation’s board of directors are involved in human trafficking and involved with the drug cartels.

On August 2015 Monica posted on Facebook a post asking for info on sex trafficking in Haiti because she was heading there to help/investigate.It says “I’m down in Haiti for the next 3 wks doing fieldwork on human trafficking (i.e. ALL exploited labor sectors, not just sex), but was wondering if anyone knew of any sex work organizations working in Haiti? No ‘sex trafficking saviors,’ just actual pro-sex workers orgs. I’m a social anthropologist who wants to do solid research on HT, rescuing people is not in my agenda (this is a stupid and imperialist concept)” Yes, she actually Specified that she was doing research on Human Trafficking more broadly and NOT sex work specifically, and then states that she is critical of imperialistic ideas concerning saving people from sex work, and was looking to contact pro-sex worker organizations in Haiti. Based on nothing but Monica Petersen’s untimely death, a link reposted by a friend of hers ‘via Monica Petersen’, and a statement by her wherein she made a call for information on pro-sex work organizations in Haiti. Most interesting and suspicious bit here is that it was the same friend (“Bella Robinson”) who posted the link back in January (http://imgur.com/TmiB2gU), 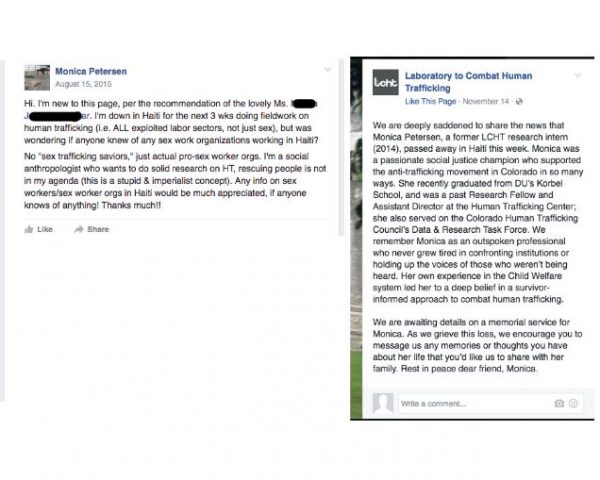 UPDATE Good friend of Monica picked up this thread and posted on her Facebook. Search Monica Petersen Haiti and you’ll see, name is Bella. LOOKS AT THE COMMENTS. Bella found out what happened and saw it fit to share this Reddit thread. Says quite a lot. http://imgur.com/a/kNEuC

UPDATE 2 Close friends are in the dark and unsure what to make of it. One of them wants to go down to Haiti to investigate: https://i.sli.mg/03JA2Y.png

UPDATE 3 Bella, a friend of Monica’s, posted this as well: http://imgur.com/a/yZKqt – “It seems that Monica was in Haiti investigating the Clintons possible ties to a pedophile ring. Monica family hasn’t been able to get any straight answers about her death”

UPDATE 4: MONICA FOUND CLINTON TRAFFICKING CONNECTION AS EARLY AS JANUARY 2016: Check out what her friend Bella posted back in January to the Facebook group “Woman’s Work Goes On”. You can find it by searching the group for “Monica Peterson” – with the quotes, and note the misspelling of Monica’s last name. Scroll down a bit to January 4. This is the screenshot: https://i.sli.mg/PsLtmj.png – Thanks /u/Jimr117 for the find!

UPDATE 6: At her memorial service, her boss CONFIRMED MONICA’S 2-YEAR-LONG investigation and findings of human trafficking in Haiti! https://np.reddit.com/r/The_Donald/comments/5dowzr/new_info_monica_petersen_died_mysteriously_in/

UPDATE 8: Close friend of Monica, /u/DominaElle confirmed in this thread that the family has not seen Monica’s body yet (and of course meaning no proper funeral/burial for Monica). She died a week ago and a memorial was held on Friday. This means no credible autopsy done yet in the US. Family is relying on information coming from Haiti. Why is the State Department not stepping in?