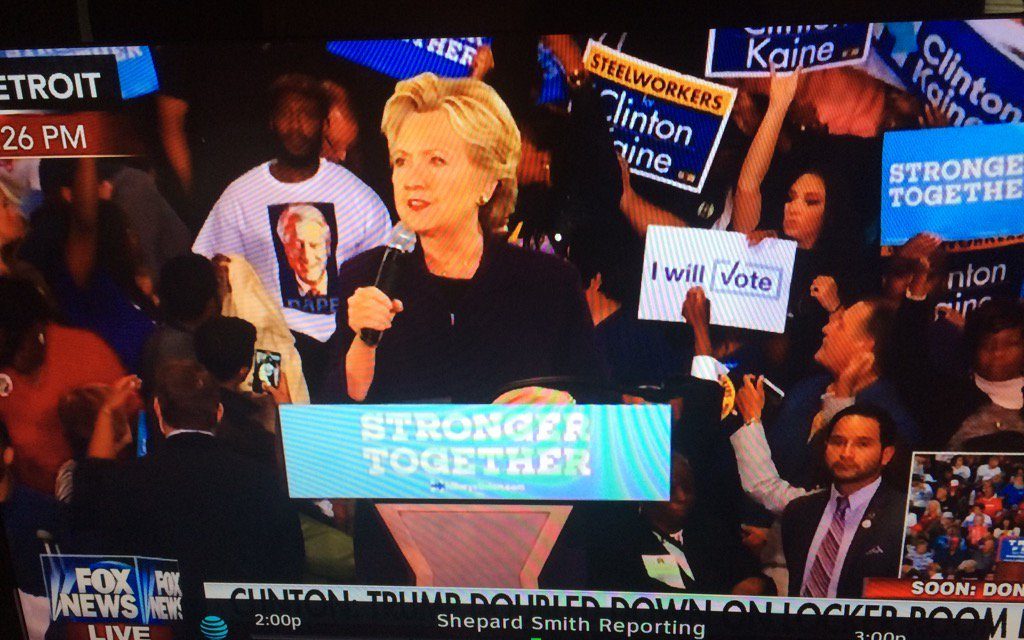 The Donald Trump campaign, and most rational Americans, have long argued that his offensive words are not as bad as Hillary Clinton’s actions — and on Monday, that point was demonstrated on live television.

Speaking at Wayne State University in Detroit, Clinton asserted that Trump insults African Americans as a black man was being assaulted and “brought to heel” by her security right behind her.

The man was wearing one of Roger Stone’s “Rape” shirts, which feature Bill Clinton’s face in the style of the infamous Barack Obama “Hope” posters, as he was assaulted and removed from Hillary’s rally — and what she was saying could not have came at a more appropriate time.

“Donald Trump has insulted not just women, but African Americans, Latinos, people with disabilities, Muslims, POWs and so many more…” Clinton pandered as the black man behind her was knocked to the ground and dragged out of her event.

Showing her true colors, she then turned around and laughed as the man was brutally dragged away. Her supporters also gleefully cheered on the assault.

“You know, I do hope somebody follows that gentleman out and stages an intervention — he clearly has not been following this election very closely, ” the smug candidate then asserts.

The controversial website Infowars is offering a monetary reward of up to $5000 for anyone that can get the “Rape” shirt seen on local or national TV for five seconds, and/or can be heard saying, “Bill Clinton is a rapist.”

Multiple people have already accepted and won the challenge, and we are sure there will be plenty more to come.

The stunt is an effort to inform the public of the former president’s numerous rape accusations. Four of his victims were also present at last night’s debate.

More videos of people participating in the challenge can be viewed here.