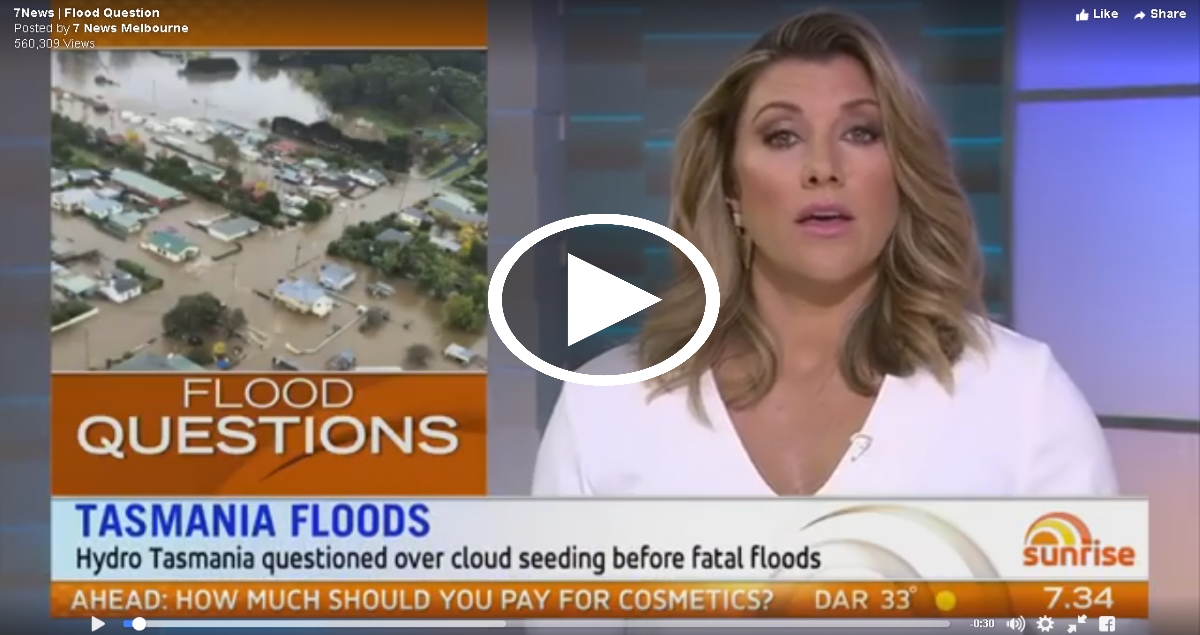 Residents in southern Tasmania want to know why cloud seeding was conducted the day before severe flooding hit the region.

Cloud seeding flight suspected to cause major flooding in Tasmania!

A cloud-seeding company Hydro Tasmania performed the seeding over the Derwent River watershed a day before the widespread flooding, caused by intense rainstorms, began on June 6, 2016. According to Premier Will Hodgman, the Energy Minister Matthew Groom is looking for an explanation as to why the seeding was authorized despite the heavy rainfalls already forecast.

Cloud seeding is a process of changing the amounts or types of precipitation by adding substances into the air that act in support of cloud condensation or ice nuclei, altering the microphysical processes occurring within the clouds.

Hydro Tasmania confirmed it conducted a cloud seeding flight on the day the storms were about to sweep the region. The flights took place on the morning of June 5 (local time) when flood warnings were already in the place in the northern area. The procedure went on for over an hour north of the Great Lake and was targeting the Upper Derwent catchment that provides water to several hydroelectric dams downstream.

The Australian Bureau of Meteorology (BOM) confirmed there were flood warnings in place for several areas in Tasmania at the time of seeding flight.

“The first media release alerting the Tasmanian community to likely impacts of the event was issued on Friday, June 3. Detailed updates have been provided directly to the local media throughout the event. The first flood warnings were issued on Saturday afternoon: six to 12 hours before the significant rain began to fall across northern Tasmania,” a weather bureau spokesperson said.

The catchment flooded on June 6 near Ouse, following torrential downpours a day earlier. First minor flooding warning was issued late evening on June 5 (local time) after the cloud seeding was already conducted. Major flood warnings were put in effect on the following day, for seven rivers, including Derwent and Ouse.

In the northern Tasmania, one person died in flood-related incidents, and one is still missing.

Why Would anyone Seed Mega rain Clouds ?

Hydro Tasmania released an official statement on June 10. They claim no flood warnings have been put in effect for the Upper Derwent at the time of the flight, and that the area did receive a substantial, although not excessive, amount of rainfall, following the seeding. They also stated the water in the Ouse River came from over-topping of Lake August, which is not in the catchment targeted by the flight.