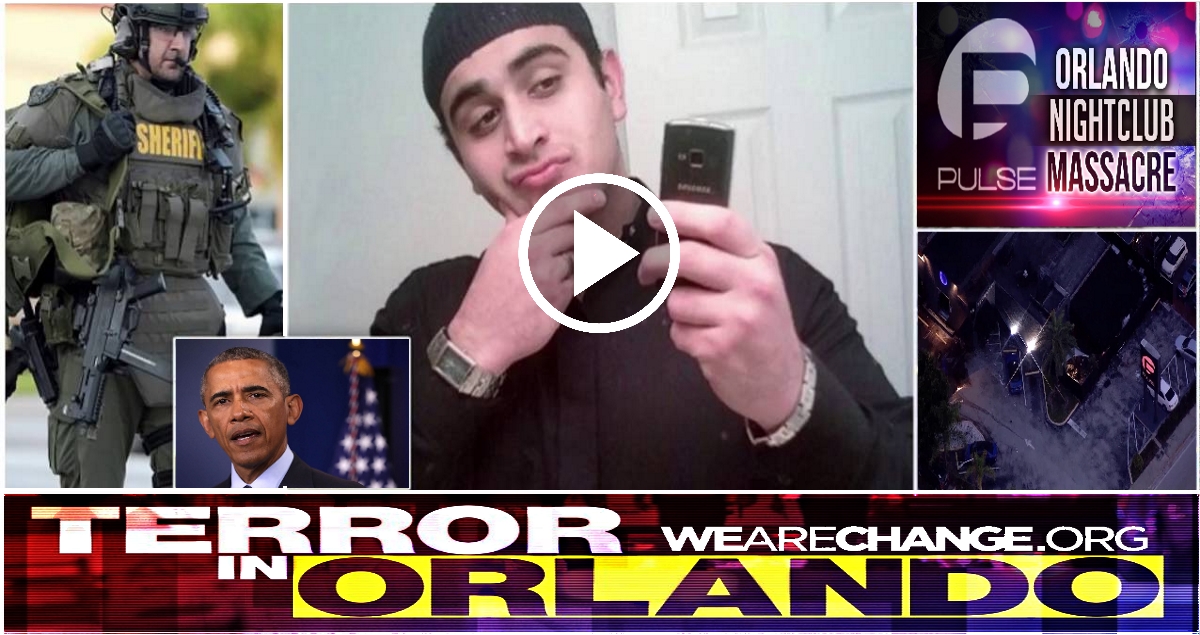 An Eye witness Was Cut off air for implying there could be a second person involved in the incident.

This was caught Live, On Air! A witness to the Orlando Pulse Night Club Shooting Describes what happened Inside! As he starts to reveal one of the most important details yet, He is cut off and dropped from the broadcast. What they could not cut out tho, is that there was “someone” Holding the Doors, Stopping People from Getting Out!! This is explosive info that proves that the Alleged suspect Did Not Act Alone!

He said he heard another gun from a different direction, so he wonders if there were two gunmen.

“Everybody dropped to the floor. We were trying to look for an exit. But the main exit was right next to the entrance where the shooter was shooting,’’ he said.

“In a moment of desperation we were all crawling on the floor trying to find a place to exit. I looked to my right and I could see people going through some curtains. We were digging through the curtains and found a door.’’

But he said the door was blocked by a man. He wasn’t sure if it was a club security person or an accomplice to the gunmen.

“Fifty people were trying to jump over each other trying to exit the place. There was a guy holding the door and not letting us exit. He’s like ‘Stay inside, stay inside.’ As he is saying that, the shooter keeps getting closer and closer and the sound of the bullets is getting closer. Everyone starts to panic. People are getting trampled. Let us out, let us out!’’’

Gonzalez’ first thought was that it was a hate crime. “This guy is trying to prevent us from leaving. Maybe they’re working together,’’ he said.

In this tweet, sent to WeAreChange.org contributer Cassandra Fairbanks

In this Video a man claims to be the one holding the Door shut to “prevent the Shooters from getting out”..  ? In a Club full of people trying to escape ? I smell a rat, it’s not Megan Kelly.

When you have Bilderberg meeting’s agenda fresh on the public’s mind. Hillary Clinton, the criminal with at least 10 unanswered criminal charges running for president of the United States, when there is a looming economic collapse and various other geo-political concerns being faced by the working class people of the world, it is in the Government’s advantage to manipulate, allow, and in specific instances to manufacture terrorist events.

For more reading see past events where the Government has carried out acts of terror on civilians.. Operation Gladio & Northwoods should be a good start for those who have no idea where this is coming from.

Another major indicator of “false flag” is the scale of the carnage. More than 50 dead? Only one shooter? And the guy was not even a special forces professional, but a flaky security guard?! (Who just happened to be on all the National Security radar screens, like so many others now-proven patsies.) Sorry, MSM, that doesn’t pass the smell test.

It’s funny how almost all “Muslim terrorists” are either ridiculously ultra-competent supermen able to take down skyscrapers and blow up the Pentagon using a couple of package-openers as their only weapons; kill ludicrously large numbers of people in mass shootings without any military training; or otherwise perform amazing feats of mass carnage … or else they are the world’s LEAST competent destruction-wreakers, dufuses who can’t get a match lit to try to blow up their own shoe, or who pack their underwear with sterno camping fuel and no detonator and somehow expect their crotch to explode.

Aside from the handful of supermen, practically every wannabe Muslim terrorist in the USA since 9/11 has been a total dufus. As Trevor Aaronson writes in The Terror Factory, almost all of the “Islamic terror plots” in the US since 9/11 have actually been FBI terror plots sold to some hapless patsy – a homeless street person, a retarded teenager – by a professional con artist. Night Club Building with only one rear exit & lack of High definition security camera’s makes us believe that this location was ‘planned ahead of time.

If the casualties are indeed this high, this is government organized slaughter with intent to create chaos, we need to demand completely independent investigation possible and if you can, try get the following going:

You can tell that they are constantly using the same people for interviews and they don’t know what they are talking about, the story changes with them all the time and no emotion at all.

It’s more important than ever we get answers, and these points are the most important ones I can come up with because this reeks false flag, any suggestions or theories are accepted.

We should demand independent investigation of the FBI, this is the absolute minimum, as long as they control it we will never know the truth.

I almost missed this slip up.. pay attention to the beginning he clearly says “shooters” so why is the Mainstream media still pushing the Lone Wolf shooter narrative ?