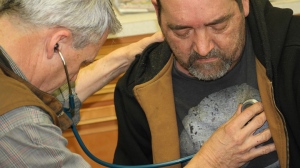 Robert Day is in rough shape, slumped over in a chair in one of Dr. Rob Marsh’s exam rooms.

For nine days, the truck driver from Fort Worth, Texas, has had trouble breathing, and has been delirious and coughing up phlegm.

The pungent odour from his body and the black grime on his hands suggest he hasn’t showered in days. He’s barely had anything to eat — a few bites of a hamburger and fries — and his two-packs-a-day smoking habit has been put on hold.

“Put me in the hospital, I don’t care,” Day tells Marsh as the doctor puts a stethoscope to his chest. “Anything to get rid of this.”

He thinks he is sick from inhaling fumes from his truck, but he’s not sure.

After the examination and some tests, Marsh indeed sends Day to the closest hospital, about 30 minutes away. He doesn’t have insurance and one night’s stay would cost him about $1,000 US.

Day, though, is grateful that Marsh was able to see him. This is truck-stop health care in action.

Marsh’s medical clinic is part of the Petro truck stop in Raphine, Va., a dot on a map of the Shenandoah Valley, a beautiful area about three hours southwest of Washington, D.C. Interstate 81 carries a steady stream of trucks through the valley, which features little more than farms and places for drivers to eat, rest and fill their vehicles with gas.
Doctor felt ‘a calling’

It’s tranquil. It’s nothing like Somalia and the other dangerous places Marsh was deployed to when he served in the U.S. military with the elite Delta Force unit. He was in Mogadishu in 1993 for the battle that Hollywood dramatized in Black Hawk Down. Marsh was seriously injured by shrapnel from a mortar round that killed the person standing next to him.

The blast to his right hip and the massive bleeding that followed could have killed him, but Marsh made it out alive. After a few more years serving, he retired and returned to his Virginia roots to practise family medicine.

“I felt a calling to come back here,” he said between bites of fried chicken that had been brought in for lunch for the staff on Tuesday.

He opened his first clinic nearly 20 years ago in Middlebrook, about 20 minutes from Raphine.

The truck-stop clinic, a building on the far side of the sprawling complex, started about a year ago and at the urging of Petro’s owner, who wants to provide plenty of services and amenities for drivers.

Other truck stops in the U.S. sometimes have doctors on site, but they mostly set up in a trailer and rotate staff.

“Doc in a box,” Marsh calls them, and that’s not his style of practising medicine.

“I want drivers to feel we’re here for the long term,” he added. “I want them to feel like I am going to take responsibility for their health care, if they want me to, just like I do for the local people.”
Busy clinic has ‘too many patients’

The truck-stop clinic serves both locals and drivers, and fills a void for both populations. Marsh has about 3,500 patients between his two clinics. Then there are the walk-ins.

“Yes sir, we’ll work you in,” a man with no appointment is told when he inquired about seeing Marsh. The North Carolina resident is working on a construction project at the truck stop and has run out of diabetes medication.

“It’s a good problem, but I’ve got too many patients,” Marsh said.

Some of the truckers he treats come in with acute problems, but others get their department of transportation-mandated physicals or their company-required drug tests.

‘He is tireless, totally selfless, totally dedicated to what he loves to do.’- Barry Perkins, former military colleague, now physician assistant to Dr. Rob Marsh

There is a big push lately by both government and trucking companies to ensure healthy drivers are on the road, for their own benefit and the safety of other drivers.

Marsh’s clinic makes it convenient for tests to be conducted and for truckers to pay some attention to their health.

“It’s tough for them,” Marsh said, describing the lifestyle of long-haul drivers. Truckers are away from home for long stretches. They are also very independent and self-reliant, they often don’t seek help until they feel really, really bad. When they’re home after a week or more away, they have other things to take care of and family to see.

The stereotypical truck driver is overweight, eats junk food and never exercises, said Marsh, but that is starting to change thanks in part to the recent focus on truck driver health and safety. Truck centres are starting to build gyms and offer healthier options in their restaurants to encourage better lifestyles, he noted.

But the homemade fudge and fried peach pies, not to mention the Krispy Kreme donuts, offered next to the cashier at the Petro truck stop must still be a challenge for some to resist.

Marsh is committed to taking good care of whoever walks through his door, whether it’s a scruffy trucker like Day or the 10-month-old baby he saw right after him. He patiently answers all of the questions the young mother had written on a scrap of paper.

Later in the day, Marsh will be making a house call to check in on a newborn. That’s right, a house call. It sounds old-fashioned, and it is. It’s rare to find a doctor who does that anymore, but rare is exactly how people describe Marsh.

“He is tireless, totally selfless, totally dedicated to what he loves to do. There are not a lot of people in this world who are like that,” according to Barry Perkins, a physician assistant at the clinic who goes way back with Marsh, to their military days at Fort Bragg. “He is very special.”