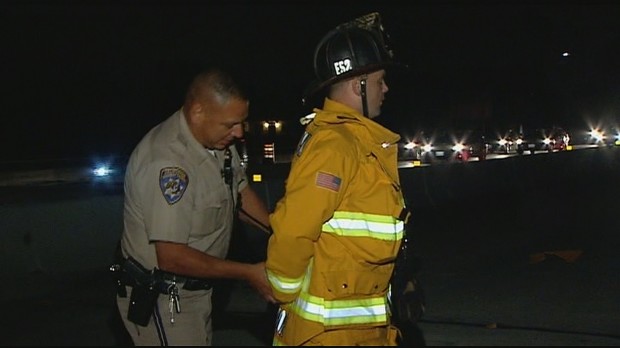 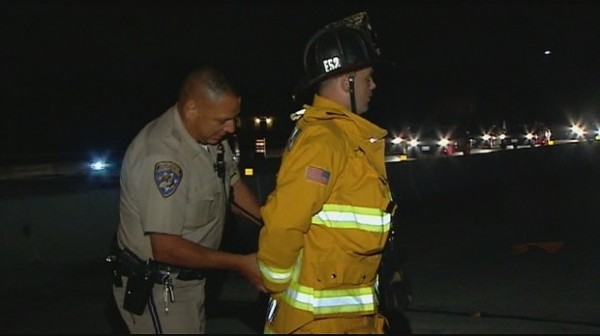 Stunning video shows a California Highway Patrol officer handcuffing a firefighter who was trying to help victims of a serious car crash in Chula Vista.

The incident occurred on Tuesday night after a car overturned and another fell down an embankment on the 805 Freeway.

Chula Vista Firefighter Jacob Gregoire responded to the accident by following standard protocol of parking his fire truck in front of the crash scene to protect the victims as they were being treated and loaded into an ambulance.

However, when a CHP officer asked Gregoire to move the truck he refused and returned to helpingthe crash victims, prompting the officer to handcuff Gregoire and temporarily place him under arrest in front of a TV news camera.

“This is ridiculous. CHP is arresting engineer for where he spotted the fire engine,” states a voice on the Fire Department radio frequency. “We’re in the middle of patient care with patients on the freeway and we’re trying to protect our scene and they’re putting him in handcuffs at this time and walking him away.”

Gregoire was detained in a CHP squad car for half an hour before supervisors from both agencies arrived.

“It’s unbelievable that you guys have to treat us like this. We are on the road trying to help people,” states Gregoire as he is being handcuffed.

The CHP say they are investigating the incident but have refused to name the officer involved or say if he has been reprimanded.
“To detain one of our firefighters in the middle of an incident is ridiculous, and it doesn’t provide the good customer service, the good public service that both of our agencies were there to do,” said Chula Vista Fire Chief Dave Hanneman, adding, “He protected the scene, in this case protected the back of the ambulance where the patients had to go into.”

Representatives from the CHP and Chula Vista Fire Department met yesterday to discuss the incident and released a joint statement saying it would be “a topic of future joint training sessions, in an ongoing effort to work more efficiently together.”

President for Local IAFF 2180 John Hess told CBS 8, “I’m very proud of Jacob. He did a good job. He made all firefighters look good. He was there to protect the citizens and he was willing to take a stand to do that.”

“We are stunned,” said Fire Engineer John Hess, President of the Chula Vista Firefighters Union. “Our Engineer parked his vehicle consistent with our standards and training. We cannot imagine what possible explanation could be given to justify this conduct by the CHP officer. This removed a valuable fire apparatus and crew out of service for approximately one hour. This occurred at the same time another Fire Engine was moved to San Diego to support their fatality structure Fire. We had two districts without service for over an hour.”

This incident again highlights how some police officers think that their duty is not to protect and serve, but to ensure that all their orders, no matter how dangerous, illogical, or inane, are obeyed without question.

Recall the June 2009 incident when an Oklahoma police officer pulled over and assaulted an ambulance driver, despite the driver making it clear that he had a sick patient who needed to get to hospital.

We recently covered an even more harrowing story centered around a Missouri father who attempted to save his dying son from a burning house.

When the father refused to follow police orders not to enter the house in a vain attempt to rescue his son, a city police officer tased Ryan Miller three times. 3-year-old Riley Miller was later found dead near the doorway to his bedroom and the house was completely destroyed.