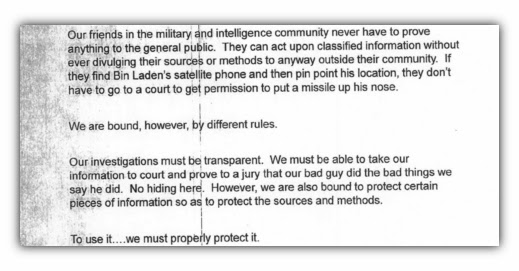 New disclosures now allow us to see online the DEA training manuals with which Drug Enforcement Administration agents are taught to coach local police departments across the country how to lie about their chains of evidence and sources, how to willfully violate the law and cover their tracks in thousands or tens of thousands of cases every year in order to fill the cells of the US prison state with drug defendants.

These materials depict an amoral, out of control police regime respecting no Constitution and no laws. DEA agents are told the evidence is unconstitutionally obtained, and that this has to be concealed from prosecutors, judges and above all from the public, some of which is still under the quaint notion that there are laws even cops and prosecutors must obey. The manuals cynically spell out how DEA agents should coach local police departments to use what they know is illegally obtained information in order to construct false chains of evidence.

One module puts the issue of using sensitive intelligence in law enforcement a bit more delicately. Per the 2012 lesson plan, the main problem with combining intelligence collection with law enforcement investigations “is the high potential for disclosure of these sensitive sources of information in our open, public trial system.”

In addition to potential national security risks of exposing classified information and constitutional quandaries, an earlier version of the module highlights another issue with introducing sensitive or clandestine evidence into domestic trials: “Americans don’t like it.” 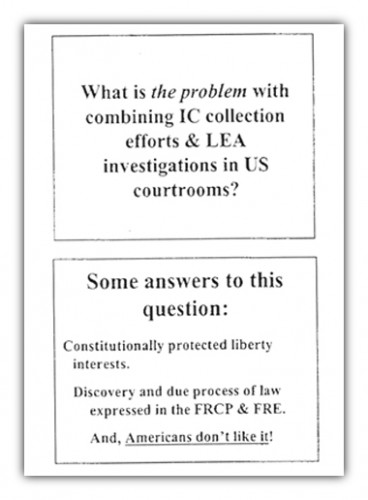 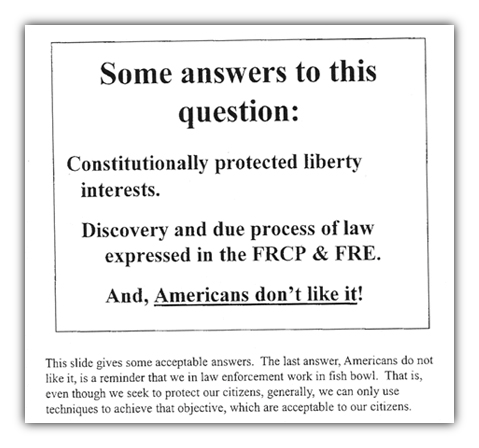 In training materials, the department even encourages a willful ignorance by field agents to minimize the risk of making intelligence practices public.

The DEA practices mirror a common dilemma among domestic law enforcement agencies: Analysts have access to unprecedented streams of classified information that might prove useful to investigators, but entering classified evidence in court risks disclosing those sensitive surveillance methods to the world, which could either end up halting the program due to public outcry or undermining their usefulness through greater awareness.

An undated slide deck released by the DEA to fleshes out the issue more graphically: When military and intelligence agencies “find Bin Laden’s satellite phone and then pin point [sic] his location, they don’t have to go to a court to get permission to put a missile up his nose.” Law enforcement agencies, on the other hand, “must be able to take our information to court and prove to a jury that our bad guy did the bad things we say he did.”

The trainer’s notes continue, “In the old days, classified material was poison. In some ways, it still is… because if treated incorrectly, it can screw up your investigation.”

A tactic known as “parallel construction” allows law enforcement to capitalize on intelligence information while obscuring sensitive sources and surveillance methods from the prosecution, defense and jury alike. DEA training documents suggest this method of reconstructing evidence chains is widely taught and deployed.

Last August, Reuters first reported on the practice of parallel construction by the DEA’s Special Operations Division (SOD), a secretive unit that includes representatives from the FBI, CIA and NSA. Slides obtained by Reuters defined the method as “the use of normal investigative techniques to recreate the information provided by SOD.” But documents released to Ciaramella indicate that DEA trainers routinely teach the finer points of parallel construction to field agents and analysts across the country, not just within SOD.

The bulk of the release comprises eight versions of a training module, “Handling Sensitive Information.” Per lesson cover sheets, the module was created in 2007 for inclusion in entry-level analyst training programs, as well as for workshops at DEA field offices. The most recent dated revision in the release is from May 2012.

DEA Academy graduates are guided to only use techniques “which are acceptable to our citizens.”
Controversy notwithstanding, parallel construction apparently makes the DEA’s list of such palatable techniques. The modules make clear that the idea is to shape evidence chains so that neither the prosecution nor the defense are to be made aware of classified information, if it can be helped. 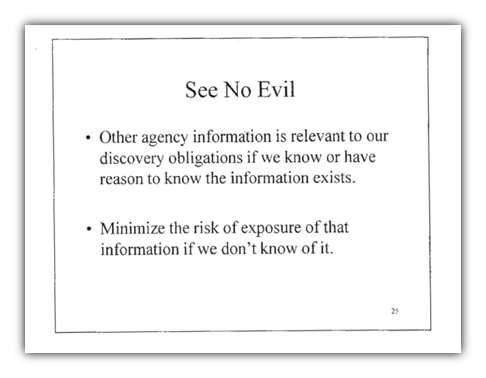 When the court is made aware of classified evidence, a squad of prosecutors called the Taint Review Team will consult with the judge to determine which evidence must be turned over to the defense. 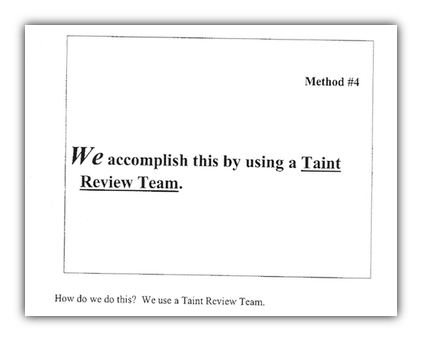 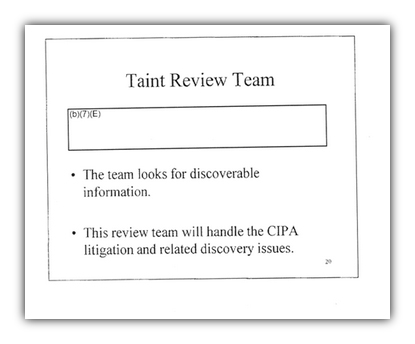 As described in the released portions of the module, parallel construction simply entails splitting the prosecutorial labor, with a Taint Review Team tackling pre-trial review so the trial prosecutor encounters as little classified evidence as possible.

To view the documents