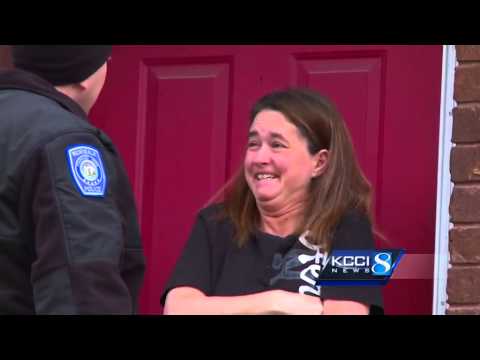 Cops in Iowa indiscriminately pulled drivers over and knocked on the doors of random houses, targeting innocent citizens going about their business.

But rather than issue tickets or citations, police unexpectedly doled out Christmas cheer.

Yesterday, unsuspecting motorists in the Des Moines suburb of Norwalk were surprised to be flagged down by officers who offered them a free $50 bill.

One lucky woman even broke down in tears when she realized police were at her home not to arrest her son, but to hand her money. “Usually when they show up, it’s not for that,” the woman said, dumbfounded by the free cash.

In all, 20 random people received $50 bills, made possible by a $1,000 donation put forth by a Norwalk officer and another anonymous donor.

The cash giveaway was inspired by other Secret Santa efforts seen in other parts of the country.

The unheralded “holiday cheer” provides a much needed PR campaign, especially in light of overwhelming criticism facing police forces across the nation over their increased militarization and their alleged targeting of ethnic minorities. The selfless acts, however, still serve as a reminder that not all cops are bad and exemplify the true spirit of Christmas.