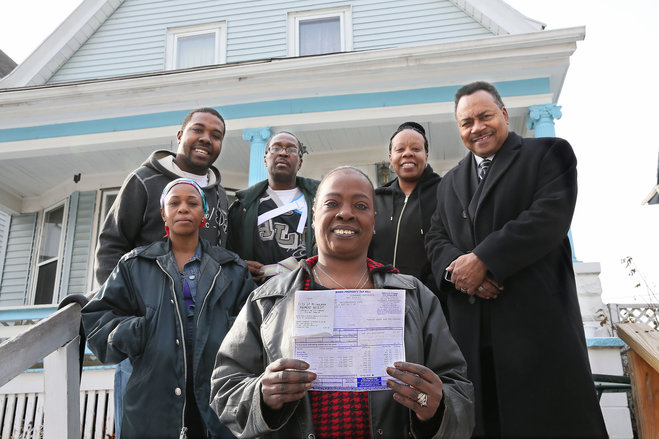 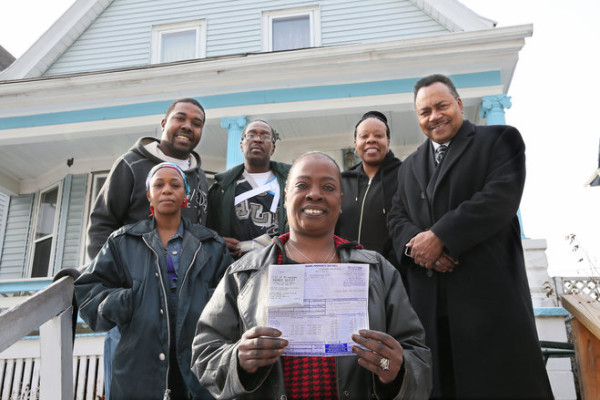 Aretha Robertson holds her property tax bill Wednesday with a receipt marked paid. To save her home from foreclosure, her neighbors raised money and the city treasurer’s office reached out to a banker for a loan. With Robertson are neighbor Billie Hintz (from left), son Marco Pollard, husband Michael Robertson, neighbor Sandra Cooper, and Milwaukee Treasurer Spencer Coggs.

Last week, I told you how Aretha and Michael Robertson’s home was rescued from foreclosure by a last-minute loan from a bank to cover delinquent taxes.

It gets better. After the column ran Friday, a stranger paid off that loan, and another couple is covering the balance of the Robertsons’ current property tax bill.

“Words alone can never express the peace of mind that was given to me and our family,” Aretha said Tuesday. “To all of the anonymous donors who came forward to pay off the loan in full and the 2014 property taxes, our hearts overflow with thanks, and may God continue to bless them and their families.”

The Robertsons have owned the home near N. 34th and W. Brown streets for 18 years and raised four children. They fell behind on their property taxes after they lost their jobs. Aretha, 47, is caring for Michael, 51, who suffered a stroke last year.

Neighbors stepped up to raise funds with a rummage sale and barbecue. The Robertsons pulled together money, too, but they were $3,000 short to cover the back taxes, interest and penalties from 2011 and 2012.

Impressed by the collective efforts to keep the neighborhood stable, Ald. Russell W. Stamper II appealed to Milwaukee Treasurer Spencer Coggs and Deputy Treasurer Jim Klajbor for anything they could do to help.

In December, Klajbor took the unusual step of contacting a friend who works at Securant Bank & Trust, a community bank, which quickly agreed to cover the shortfall with a loan to the Robertsons, even though they were not customers. The city then moved to void the foreclosure.

After the story appeared in the newspaper, Dave Davis, Securant president, said the anonymous donor’s financial representative called to inquire about the loan and then walked into the bank Friday with a check for the entire payoff amount, $3,089.78.

Two more people contacted the bank with the same offer to pay the loan, Davis said. Still others wanted to cover a monthly payment.

“It renews many of our beliefs about mankind,” Davis said. “I think it’s spectacular.”

Meanwhile, a couple from Waukesha County contacted me and then the treasurer’s office with an offer to pay the 2014 property taxes, which the Robertsons had planned to pay in installments this year.

This donor mentioned a parent who died and left his children a modest estate. “If he were alive today and read your story, he likely would have said, ‘These folks deserve the help they’ve been given, and could use more,’ ” the donor wrote.

Klajbor said in his 40 years on the job he has never seen a stranger pay all of someone else’s tax bill, in this case $1,026.57. Coggs said people were moved by the Robertsons’ struggle and efforts to save their home.

“We got a call from Aretha, and half the conversation she was just crying. They were tears of joy obviously,” Coggs said.

Aretha thanked her supportive family, neighbors, alderman, treasurer, the bank and everyone who prayed for her and Michael. She is happy to be trading sleepless nights for a fresh start.

“I am so flabbergasted. I just can’t believe it. God is good,” she said.

This week, the Robertsons received a letter at home from a Mukwonago woman who wrote that she understood hard times. In 1970, as she was raising five children and going to school, she fell behind on her mortgage payments. Someone she barely knew loaned her $500. The house, where the woman still lives, was saved from foreclosure.

When and if you’re able, the woman said, pass on the favor.