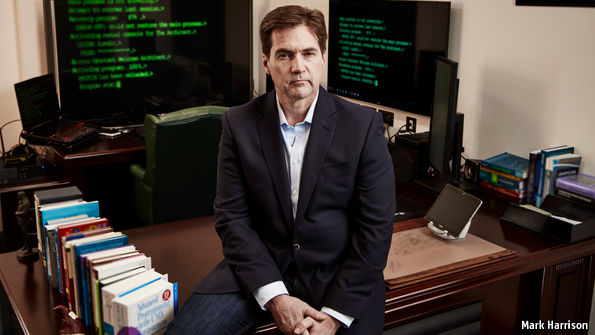 FIVE months after Craig Steven Wright, an Australian computer scientist and businessman, was outed against his will as Satoshi Nakamoto, he says he is indeed the creator of bitcoin. On May 2nd he published a blog post offering cryptographic proof, backed up by other information, to make his case. Along with two other media organisations, The Economist had access to Mr Wright before the publication of his post. Our conclusion is that he could well be Mr Nakamoto, but that nagging questions remain. In fact, it may never be possible to prove beyond reasonable doubt who really created bitcoin. Whether people, particularly bitcoin cognoscenti, actually believe Mr Wright will depend greatly on what he does next, after going public.

In December, after he was outed, Mr Wright stayed silent. So why has he now changed his mind? “I’m not seeking publicity, but want to set the record straight,” he explains. He says he called himself “Nakamoto” after a 17th-century Japanese philosopher and merchant, Tominaga Nakamoto, who was highly critical of the normative thought of his time and favoured free trade. (He doesn’t want to say why he picked “Satoshi”: “Some things should remain secret.”)
If Mr Wright is indeed Mr Nakamoto that would not only help to illuminate the origins of bitcoin—it could also have a big impact on the future of the controversial cryptocurrency. Although the rhetoric has become less strident in recent weeks, the project has been held back by a deep split between those who want to keep bitcoin pure and those who want to modify its workings to allow it to grow rapidly—even if that means making it more like a conventional payment system. Having launched the bitcoin project with the publication of a paper in 2008, and then the first release of bitcoin software in 2009, Mr Nakamoto stepped back from active involvement in 2010. His return from obscurity would most certainly change the dynamics of the debate about bitcoin’s future direction.

Having been named as Mr Nakamoto once before, unconvincingly, Mr Wright has a steep hill to climb to convince the world that he is indeed who he claims to be. Evaluating his claim involves the application of a multi-step paternity test. First comes the factual evidence: can Mr Wright prove that he is in possession of cryptographic keys that only Mr Nakamoto should have? Second, does he have convincing explanations for the holes in the story which came to light when he was first outed in December? Third, does he possess the technical knowledge that would have enabled him to develop a system as complex and clever as bitcoin? And fourth, to what extent does he fit the image that people have of Mr Nakamoto; in particular, what do those computer scientists who have collaborated online with Mr Nakamoto think of Mr Wright’s claim to be him? These are the questions that the bitcoin community will be arguing about in the coming days—and which Mr Wright must answer convicingly if he is to convince the world of his claim.