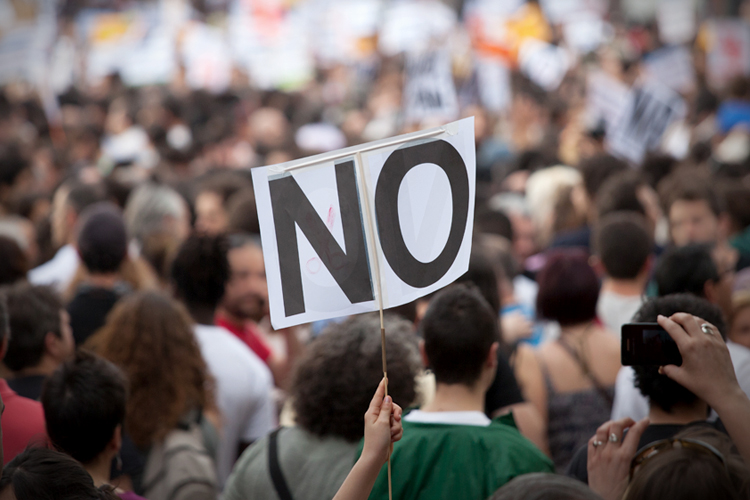 While the right to protest peacefully is guaranteed to Americans by the First Amendment, it could soon be in jeopardy in nearly a dozen states. Following massive protests over Donald Trump’s election, Republican lawmakers are now working to create new penalties and laws that would discourage protesting.

As WeAreChange previously reported, North Dakota was one of the first states to propose such a law. The state’s actions came in response to protesters standing up against the Dakota Access Pipeline, and, if passed, it will criminalize masked protests, and will allow drivers to legally run over protesters.

The legislations are all different—some worse than others—but their ultimate goal seems to be to criminalize protesting.

One of the harshest, besides legalizing running protesters over, is giving police free will to use “any means necessary” to clear protesters off the roads, which was proposed in Indiana.

Other states would greatly increase penalties for protesters.

In Colorado obstructing or tampering with oil and gas equipment would be classified a “class 6” felony punishable by up to 18 months behind bars and a fine of up to $100,000.

In Virginia, protesters caught during “unlawful assembly” after “having been lawfully warned to disperse” could face a year imprisonment and a fine of up to $2,500.

In Michigan an anti-picketing law would severely increase penalties against protestors and would make it easier for corporations to sue protestors for their actions.

While Minnesota, Washington State, and Iowa focus on increasing punishment for protesters who protest on highways, each implementing their own conditions for jail time and fines.

These are completely insane prospects that, if we aren’t careful, could soon become law and we must fight back by using the method they seek to criminalize protesting.

How such a law wouldn’t violate the U.S. constitution which each of these political hatchets vowed to protect and serve is beyond me. But the time is now to stand up for your right to peacefully assemble. The keyword is “peacefully”, not like the riots in DC. Why are the nanny states so afraid of a few people with cardboard signs and chants with a megaphone using their first amendment?