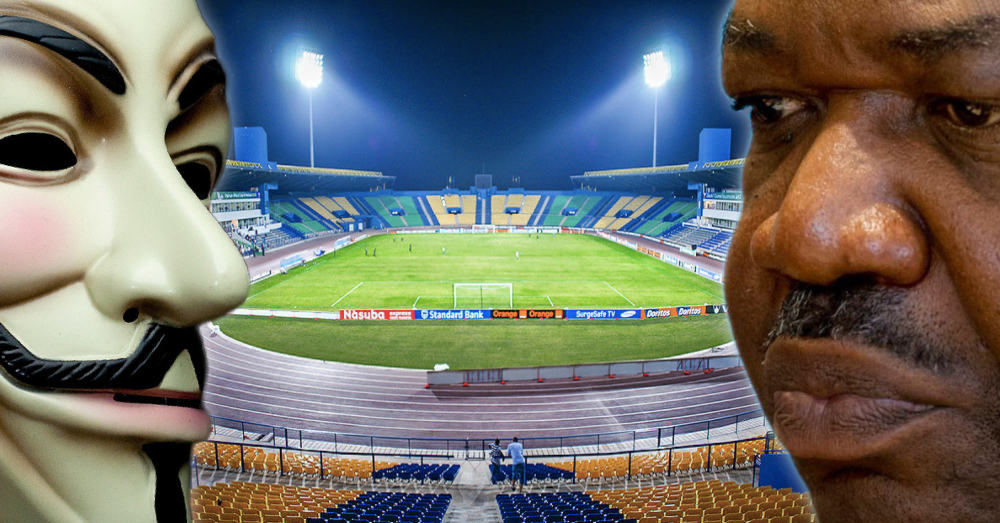 New World Hackers recently spoke exclusively with WeAreChange about taking down the websites of Total Oil and the Africa Cup of Nations.

A representative for the group referred to as NWHownz, explained that the recent attack was done to send a message to Gabon’s dictator. He said they attacked the websites AFCON and Total Oil because the central African nation of Gabon is a “dictatorship” under president Ali Bongo Ondimba, who retained power despite disputed and violent elections last year.

“You don’t just let innocents be abused and killed while you are enjoying yourself in a soccer tournament. The oil company funded them with over 200 million dollars for the entire season,” Ownz said.

He added, “The President is the one calling the shots, so he has stood behind it and allowed it. It was more of a message to him.”

If you remember the name New World Hackers, it is because WeAreChange interviewed them in October when they claimed responsibility for the U.S. internet outage that they said was carried out in the name of protecting Wikileaks.

Ownz said that the reason for the latest hack is because “Gabon is a dictatorship,” which he alleged has “been transferring illegal goods in and torturing the good people of that country.”

He further said that there while there is a major poverty problem in Gabon, $200 million is invested in a soccer game. “200 million is nothing to an oil company investing billions into gas and other illegal activities,” Ownz said.

Gabon was caught in 2008 and 2013 performing ritualistic sacrifices by mutilating children and draining their blood for African politicians hoping for election luck.

Alex O talks about his home country of Gabon in the video below, and he alleges that the current leader of Gabon is “illegitimate and that Jean Ping won the election and that Bongo sent his militia to attack the election center.”

This is something Anonymous OpGabon also warned of in August. Alex stated that Bongo has stolen billions from his nation. It’s worth noting that former U.S. president Obama invited Bongo to the White House in 2011.

#Gabon Ali Bongo's militia will attack @pingjean election headquarter. Anything can happen. Don't say you did not know. @OsloFF @guardian

A group “Collective turn the page” has requested an international inquiry into the military and police repression that followed post-election violence in Gabon.

All the while Ali Bongo’s legal council has accused Ping of election fraud.

“The irregularities we found are that we are almost sure that Ping falsified documents including those that he handed to us. The documents are facts.
Those that you see on my table each time. That kind of document that is everywhere in the country. So what Ping has done is to the detriment of Ali Bongo and we have all these evidence and will submit them to the Constitutional Court,” Ali Akbar Obegue, President Ali Bongo’s Legal Committee campaign group said.

Gabon has been governed by one family for the past 50 years: the Bongos.

Why attack total oil at the soccer cup?

“You don’t just let innocents be abused and killed while you are enjoying yourself in a soccer tournament. The oil company funded them for over 200 million for the entire season. The president is the one calling the shots, so he has stood behind it and allowed it. It was more of a message to him..”

“Plus we shut the soccer tournament down and Gabon got knocked out of the tournament.”

What is going on that the world needs to know about in Gabon?

Gabon is a dictatorship that has been transferring illegal goods in and torturing the good people of Gabon.

200 million dollars that is a ridiculous amount of money how much do you think you cost them taking down their website?

“200 million dollars is nothing to an oil company investing billions into gas and other illegal activities. 5 hours could have been 5 days or 5 months, that DDoS attack didn’t harm them that much. They also went under maintenance for about 2-3 more hours.”

So the attack was more of a message to the president? Anymore planned attacks in the name of OpGabon? or future projects for NWH?

We have much more cooked up for the people of the world to see, but it’s classified.

So if you were to guess how much would you say such an attack cost them? a couple thousand?

What types of illegal goods are they transferring in Gabon? What other illegal activities is Total involved in? Do you have any evidence for your claims any news articles on what is going on in Gabon? Anything you would like to pass on for the world to see?

“Illegal drugs of sorts, some that aren’t government released as in.. you know what I mean.. Google it.”