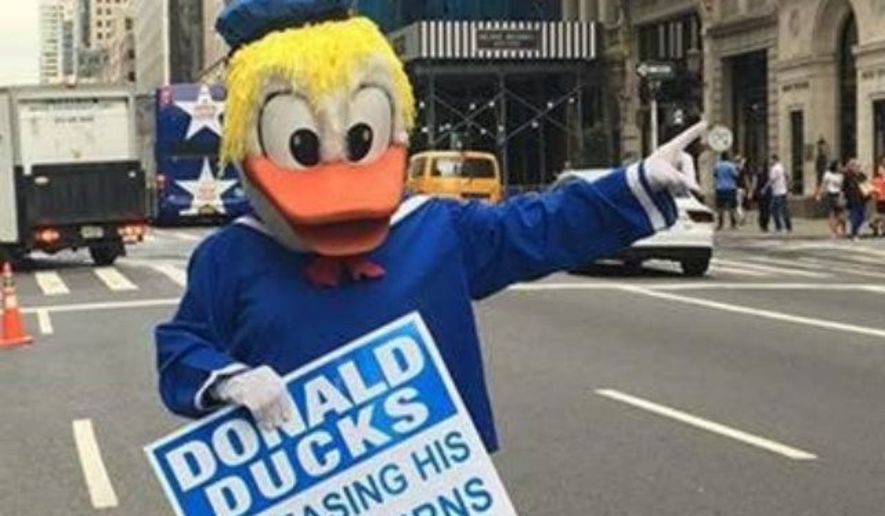 The Democratic Party has hired a heckler to follow Donald Trump on the campaign trail — since protests against him have fizzled along with the excitement over their candidate, Hillary Clinton. 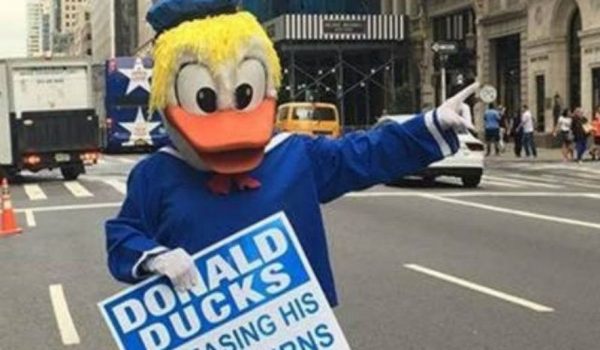 In an effort to get Trump to release his tax returns (while Clinton continues to ignore calls to release her Wall Street transcripts, health records, and deleted emails) the party has resorted to sending a mascot dressed as Donald Duck to stand petulantly outside of Trump Tower in New York.

Hoo boy:Dem's have dispatched someone dressed as "Donald Duck" to Trump tower to make a point about his tax returns pic.twitter.com/Zwyp0Nih99

Donald Duck, making a point about Trump not releasing his tax returns, is now riding up and down the Trump escalator pic.twitter.com/0v5cWf2tGw

The cheesy character held a sign which read, “Donald Ducks releasing his tax returns.” An interesting move, as the party continues to duck transparency themselves.

Trump has repeatedly cited being audited by the IRS as his reasoning for not releasing his tax returns.

Clinton has released her tax returns, which show that 96% of her charitable donations went to her own foundation. The Clintons pulled in $10,745,378 in 2015 — mainly from giving speeches.

As of writing this, on August 18 at 4:41 PM, it has been 195 days, 18 hours, 11 minutes, and 41 seconds since Clinton promised to “look into” releasing the transcripts of her Goldman Sachs speeches — according to an online clock that is keeping track.

Perhaps someone should let the DNC know that you shouldn’t throw stones if you live in a glass house, and that maybe rigging the primary for a candidate who doesn’t have room to talk wasn’t the best idea.

Also, they might not have had to pay people to protest their opponent if they had went with the candidate that actually excited progressive voters.