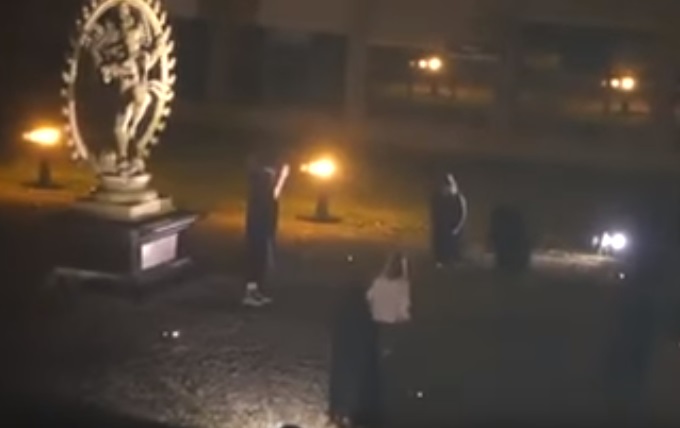 A bizarre video has surfaced online which claims to show researchers at CERN, home of the Large Hadron Collider, participating in a ‘satanic human sacrifice.’ 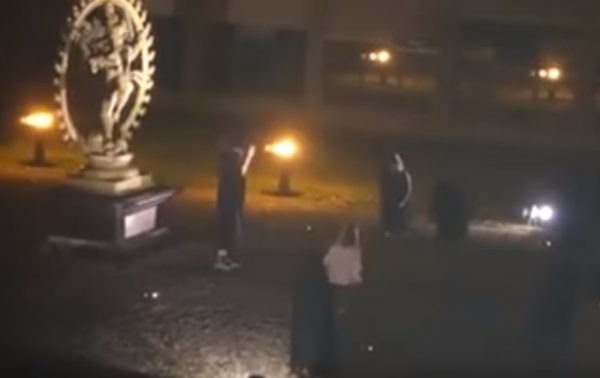 In the footage, a group of people wearing hooded black robes appear in front of a statue of the Hindu god Shiva on the CERN premises in Geneva, Switzerland — the world’s largest particle physics lab. The statue was a gift from the Government of India.

“So in the light of day, when CERN is teeming with life, Shiva seems playful, reminding us that the universe is constantly shaking things up, remaking itself and is never static. But by night, when we have more time to contemplate the deeper questions Shiva literally casts a long shadow over our work, a bit like the shadows on Plato’s cave,” a student working at CERN, Aidan Randle-Conde, once wrote about the statue.

A woman wearing a white dress enters the middle of the group and knees down on the ground.

Moments later, the woman lays down and a cloaked man approaches, raising his hands above his head before slamming them down onto the woman’s chest. Viewers have speculated that he appears to be holding a knife.

The frightened witness who is filming from what appears to be a window then begins swearing and appears to be attempting to run away before the footage abruptly cuts off.

The video that caught the world’s attention was uploaded by a YouTube user who uses the name ‘Richie from Boston,’ though it has been reposted many times and it remains unclear who the original source was.

“Whether it’s a mock ritual or now, it’s still a ceremony being performed on the grounds of CERN,” the user wrote.

In an update, the user declared that the person who filmed the incident is now dead.

“So it turns out the origin of the video posted for the sacrifice at CERN has been found – the problem is, the man is dead. Now hoax or no hoax, let me remind you all we have seen this before and we know all that expose this evil are killed or made to disappear,” he wrote.

CERN is best known for their work using the Large Hadron Collider to discover the Higgs boson particle.

A spokesman for the facility has stated that the footage was shot without official permission, and referred to it as a “spoof,” and that their researchers simply “let their sense of humour go too far.”

“This video is a work of fiction. CERN fills up with visitors over summer, with users from across the world who come to CERN as part of their work, and some of whom occasionally let their sense of humour go too far,” a spokesman for CERN told The Mirror. “That is what has happened on this occasion. CERN does not condone this kind of spoof.”

Another representative for the facility echoed the other statement, telling Agence France-Presse that it was a prank gone too far.

“These scenes were filmed on our premises without official permission or knowledge,” the spokeswoman stated. “CERN does not condone this type of spoof.”

She did however confirm that the only people who are permitted access to the grounds are those with a security clearance — meaning that the robed figures in the footage are either CERN employees or scientists visiting to work with them.

Whatever was happening in the CERN video is eerily reminiscent of footage of a Skull & Bones ritual that was caught on tape at Yale in 2001, obtained by New York Observer investigative reporter Ron Rosenbaum. In that video, members of the group appear to be ghoulishly kissing skulls and acting out murder scenes.