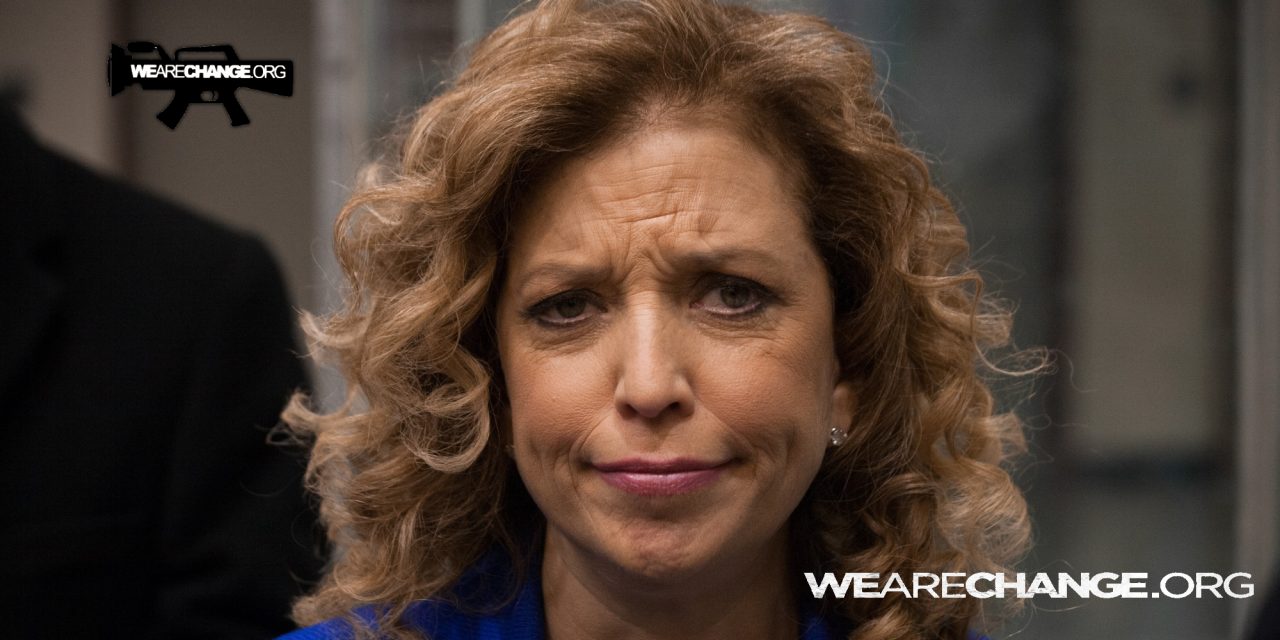 New from The HILL

Democrats on Capitol Hill are discussing whether Rep. Debbie Wasserman Schultz should step down as Democratic National Committee (DNC) chairwoman before the party’s national convention in July.

Democrats backing likely presidential nominee Hillary Clinton worry Wasserman Schultz has become too divisive a figure to unify the party in 2016, which they say is crucial to defeating presumptive GOP nominee Donald Trump in November.

Wasserman Schultz has had an increasingly acrimonious relationship with the party’s other presidential candidate, Bernie Sanders, and his supporters, who argue she has tilted the scales in Clinton’s favor.

“There have been a lot of meetings over the past 48 hours about what color plate do we deliver Debbie Wasserman Schultz’s head on,” said one pro-Clinton Democratic senator.

The lawmaker said senators huddled on the chamber floor last week to talk about Wasserman Schultz’s future and estimated that about a dozen have weighed in during private conversations.

“I don’t see how she can continue to the election. How can she open the convention? Sanders supporters would go nuts,” said the lawmaker, who requested anonymity because of the sensitive nature of the discussions.

There is no indication Wasserman Schultz, who is also a Florida congresswoman, has any plans to leave her post. And Senate sources stress that a final decision won’t be made until Clinton and Sanders negotiate some type of deal aimed at healing the party. President Obama, who selected Wasserman ­Schultz as chairwoman in 2011, is expected to play a major role in any such talks.

The Clinton and Sanders campaigns have already struck a deal with Wasserman Schultz to limit her role in the convention’s platform committee.

Under DNC rules, she could have appointed all 15 members of the platform committee but instead picked only four. Clinton got to fill six positions, and Sanders chose five.

The concession, however, may not be enough to keep her in the job through the Democratic National Convention.

A senior Senate Democratic aide said, “There’s a strong sentiment that the current situation is untenable and can only be fixed by her leaving. There’s too much water under the bridge for her to be a neutral arbiter.”

Another Democratic senator who supports Clinton said Wasserman Schultz will hurt her chances of rallying the liberal base in the fall.

“We need to get this figured out and come together,” said the lawmaker. “Hillary’s got the nomination. She needs Bernie’s energy. It’s time for her to accommodate. It’s time to pick hard-nosed people to cut through things and figure out a deal.”

They need to know this is their party,” the lawmaker said, observing that if Wasserman Schultz were to be replaced as party leader, young liberals may become more enthusiastic about the ticket. because she’s worked hard to help the party. But they say the greater priority is to mollify restive liberals backing Sanders.

Wasserman Schultz and Sanders backers have clashed on Twitter in the wake of the chaotic Nevada Democratic convention earlier this month.

Sanders, who claimed the party establishment gave Clinton an unfair advantage in Nevada, has since endorsed Wasserman Schultz’s primary opponent. He also said he would not want her to continue as DNC chief if he were to become president.

Among Democrats, the view that Wasserman Schultz should go in the name of party unity isn’t unanimous.

“I think Debbie Wasserman Schultz has done a good job. If you look at her platform committee appointments, she really gave a lot of room to Bernie supporters,” Mikulski said.

Mikulski said she was not aware of conversations about replacing the DNC chairwoman.

“That’s not going to happen. I certainly wouldn’t let it happen,” Sen. Bill Nelson (D-Fla.) said of the prospect of Wasserman Schultz leaving the DNC before the convention.

Nelson was one of several senators who called to speak on the record after The Hill contacted the DNC for comment.

Sen. Tim Kaine (D-Va.), a former DNC chairman whose name has been floated as a possible running mate for Clinton, said: “We don’t need to be making a change in chairs right now as we’re coming to the conclusion of this. I strongly believe that.”

Sen. Kirsten Gillibrand (D-N.Y.), one of the rising female stars of the upper chamber, said, “She helped elect Barack Obama twice, and she’s going to help elect our nominee, whom I believe should be Hillary.”

In an emailed statement to The Hill, House Democratic Leader Nancy Pelosi (Calif.) said, “DNC Chairwoman Wasserman Schultz enjoys the support of members of the House Democratic Caucus for her leadership in unifying the party and winning in November.”

An aide to Vice President Biden said, “He supports her and her leadership of the committee.”

“The real story is you have a bunch of notable U.S. senators and members of Congress on the record expressing support for the strong leadership Rep. Debbie Wasserman Schultz has provided at the party, and an anonymous source who disagrees,” said Luis Miranda, the DNC’s communications director.

“She’s going to continue to focus on uniting Democrats and on being an asset to help elect them up and down the ballot in November, just as she’s done for many in both chambers,” he added.

But a neutral Democratic strategist involved in talks between constituencies on either side of the Clinton-Sanders divide said electing a new chairman “would help everyone.”

“I think that would help the Hillary campaign. That would be a symbol to the Bernie people that Hillary is hearing them,” he said.

Still, Clinton is known for valuing loyalty, and pushing Wasserman Schultz out could signal weakness. The Florida legislator endorsed Clinton over Obama in 2008.

The Sanders campaign and its allies have accused her of giving Clinton favorable treatment in an array of areas.

They point to several instances of perceived bias, such as scheduling televised debates at times of lower viewership, suspending Sanders’s access to a shared voter database and setting up a joint fundraising committee with Clinton’s campaign.

“It’s been clear there is a pattern of conduct from the beginning of this campaign that has been hostile to Bernie Sanders and his supporters, and really, she’s become a divisive figure in the party,” he told MSNBC host Steve Kornacki.

The Clinton campaign did not respond to a request for comment.

“Sen. Sanders has said that if elected president he would not support Debbie Wasserman Schultz as chair of the Democratic National Committee. He believes that we need a chair who can effectively reach out to all the constituencies that are part of the Democratic Party,” said spokesman Michael Briggs.

Following the uproar at the Nevada convention earlier this month, some pro-Clinton lawmakers wanted Sanders to call for party unity, but he opted instead to rip the party establishment.

“Unfortunately, the senator’s response was anything but acceptable,” Wasserman Schultz told CNN. “It certainly did not condemn his supporters for acting violently or engaging in intimidation tactics, and instead added more fuel to the fire.”

That response struck many Democrats — Clinton and Sanders supporters alike — as tone-deaf.

“It’s very important for her to adopt a role of pouring oil on troubled waters. She did the opposite last week when she poured gasoline on the events that occurred in Nevada,” said Sen. Jeff Merkley(D-Ore.), the only member of the Senate who has endorsed Sanders.

He said, however, that he was “heartened” that Wasserman Schultz allowed Sanders to appoint five members to the platform committee.

When asked if Wasserman Schultz should stay on as DNC chairwoman through the convention, Merkley said, “I’ll leave that to others.”