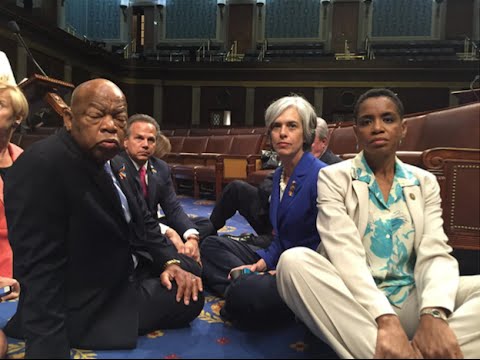 So, Democrats have decided to host a sit-in on the House floor because all of the gun control legislation they rushed to a vote just a week after the Orlando shooting failed to pass.

They didn’t get their way, so they’re going to literally sit and whine about it, or, as Reason pointed out up front in this article’s title, “Democrats sit-in for Secret Lists and Maybe Even a Police State”:

Details are scarce. Vox.com reports that House Democrats would like to force a vote the way Senate Democrats did through a filibuster. The Senate voted on four gun bills on Monday night, with all four failing. The most egregious wanted to deny the right to bear arms for anyone who was put on the federal government’s terror watch list, a list the federal government can put any American on without even the pretext of due process.

But there do not appear to be any bills similar to the ones in the Senate that have actually been submitted to the House. I called the DC office of Rep. Lewis to ask for which legislation the sit-in was intended but was told there was no “specific” legislation but rather a push to get some kind of vote. After asking a follow-up, the person who picked up the phone told me he did not speak for the office and gave me the contact information for Lewis’ communications director, who has not responded*.

We had a vote, and all four gun control bills were shot down. That’s how Congress works. Do these people not realize how their own jobs are supposed to work? (That last question was actually rhetorical).

What a bunch of petulant toddlers… they’re just going to force a vote? On what?

Well now there is talk of a vote on compromise bills introduced by Maine Republican Susan Collins that might be even worse for innocent American gun owners than the ones which were already voted down.

In this new version of “no-fly, no-buy,” Americans unfairly stripped of their 2nd Amendment rights would have to appeal the decision in Federal court.

By Collins’ own admission, this proposal still strips due process and takes away Second Amendment rights before an appeal, boiling down to an absolute bureaucratic nightmare. Although Collins’ effort to prevent terrorists from purchasing firearms is noble, her amendment is an absolute nightmare for innocent Americans who end up on these secret, government terrorism no-fly and “selectee” lists.

(Lily Dane contributed to this report.)

Contributed by Melissa Dykes of The Daily Sheeple.

Melissa Dykes is a writer, researcher, and analyst for The Daily Sheepleand a co-creator of Truthstream Media with Aaron Dykes, a site that offers teleprompter-free, unscripted analysis of The Matrix we find ourselves living in. Melissa also co-founded Nutritional Anarchy with Daisy Luther of The Organic Prepper, a site focused on resistance through food self-sufficiency. Wake the flock up!