DEVELOPING: Multiple Reports U.S. Airstrikes Being Carried Out On Syria 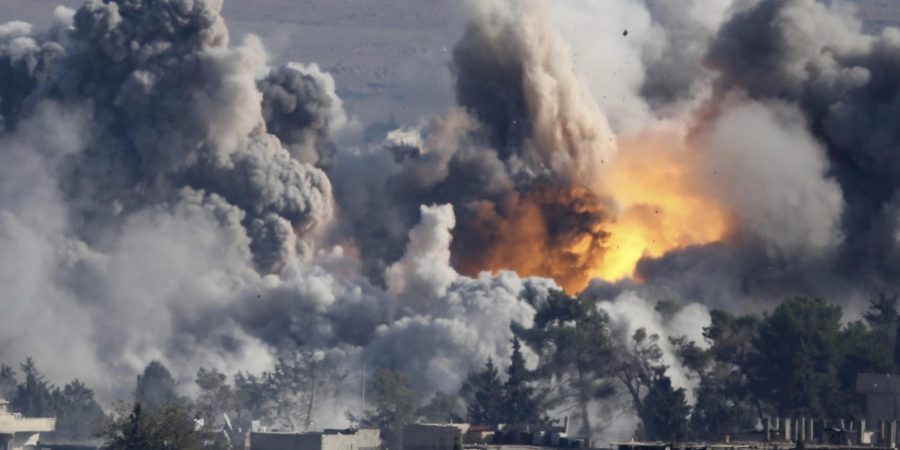 (WeAreChange) — U.S. military officials have confirmed to NBC News that the United States launched dozens of cruise missiles at a Syrian airfield on Thursday night in response to what US officials believe was the Syrian government’s use of banned chemical weapons which were blamed for having killed at least 100 people on Tuesday.

Moment a Tomahawk missile being launched from US warship against Al-Shuairat airbase in #Syria's Homs. pic.twitter.com/jchjM9u7ZG

Two U.S. warships in the Mediterranean Sea fired approximately 60 Tomahawk missiles intended for a single target — Ash Sha’irat in Homs province in western Syria which is reportedly the airfield from which the United States claims the government of Syrian President Bashar al-Assad fired the banned weapons.

There was no immediate word on casualties, however U.S. officials informed NBC News that people were not targeted and that aircraft and infrastructure at the site, including the runway, were hit.

Russia Previously Warned Against An Attack On Syria

Russian deputy U.N. envoy, Vladimir Safronkovhav previously warned about the dire consequences of a U.S. attack on Syria. According to Yahoo News, he was reported to say:

As reported, when asked about what the consequences would be, he said “Look at Iraq, look at Libya.”

President Trump spoke to reporters at his Mar-a-Lago resort in Florida following the attack. Here’s his full statement:

Assad choked out the lives of innocent men, women and children. It was a slow and brutal death for so many. Even beautiful babies were cruelly murdered in this very barbaric attack.

No child of god should ever suffer such horror.

Tonight I ordered a targeted military strike on the airfield in Syriafrom where the chemical attack was launched.

It is in this vital national security interest of the United States to prevent and deter the spread and use of deadly chemical weapons.

There can be no dispute that Syria used banned chemical weapons, violated its obligations under the chemical weapons convention, and ignored the urging of the UN security council.

Years of previous attempts at changing Assad’s behaviour have all failed and failed very dramatically.

Tonight I call on all civilised nations to join us in seeking to end the slaughter and bloodshed in Syria, and also to end terrorism of all kinds and all types.

We ask for god’s wisdom as we face the challenge of our very troubled world.

We pray for the lives of the wounded and for the souls of those who have passed.

And we hope that as long as America stands for justice that peace and harmony will in the end prevail.

Goodnight and god bless America and the entire world. Thank you.”

.@POTUS Trump delivers statement on targeted, military strike on airfield in #Syria from where chemical attack was launched. pic.twitter.com/N54VvI88sc

“Russian forces were notified in advance of the strike using the established deconfliction line. US military planners took precautions to minimise risk to Russian or Syrian personnel located at the airfield.

We are assessing the results of the strike. Initial indications are that this strike has severely damaged or destroyed Syrian aircraft and support infrastructure and equipment at Shayrat airfield, reducing the Syrian government’s ability to deliver chemical weapons.

The use of chemical weapons against innocent people will not be tolerated.”

The Pentagon itself has also apparently responded:

Kentucky Republican Senator Rand Paul issued a statement on Twitter shortly after the attacks pointing out that Trump’s military action was essentially pointless and unconstitutional:

“While we all condemn the atrocities in Syria, the United States was not attacked. The President needs Congressional authorization for military action as required by the Constitution. Our prior interventions in this region have done nothing to make us safer and Syria will be no different”

“We salute the skill and professionalism of the U.S. Armed Forces who carried out tonight’s strikes in Syria. Acting on the orders of the commander-in-chief, they have sent an important message the United States will no longer stand idly by as Assad, aided and abetted by Putin’s Russia, slaughters innocent Syrians with chemical weapons and barrel bombs.

Unlike the previous administration, President Trump confronted a pivotal moment in Syria and took action. For that, he deserves the support of the American people. Building on tonight’s credible first step, we must finally learn the lessons of history and ensure that tactical success leads to strategic process. That means following through with a new, comprehensive strategy in coordination with our allies and partners to end the conflict in Syria. The first measure in such a strategy must be to take Assad’s air force – which is responsible not just for the latest chemical weapons attack, but countless atrocities against the Syrian people – completely out of the fight. We must also bolster support for the vetted Syrian opposition and establish safe zones to address the ongoing humanitarian crisis. As we do, we can and must continue the campaign to achieve ISIS’ lasting defeat.”

Breaking news right now #MSNBC: airstrikes carried out by the US into #Syria

Was Trump Planning On This The Whole Time?

In case you missed it, We Are Change’s Luke Rudkowski had previously predicted that war in Syria would happen under the Trump administration:

The Syrian SANA news agency stated that there were several casualties. Interfax reported that the state TV news agency called the attack “an act of aggression”.

This attack marks the first time the U.S. has deliberately targeted Assad’s military in Syria’s multi-sided civil war, now ongoing into its seventh year. Until now, the U.S. has focused solely on targeting Islamic State militants.

(THIS IS A DEVELOPING STORY CHECK BACK FOR UPDATES)