Disabled teacher in Gaza inspires his students to never give up 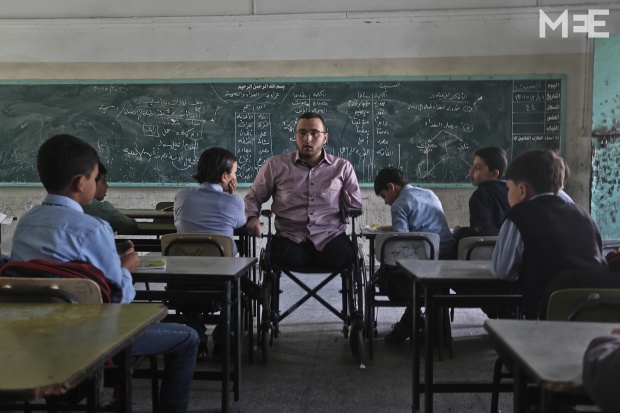 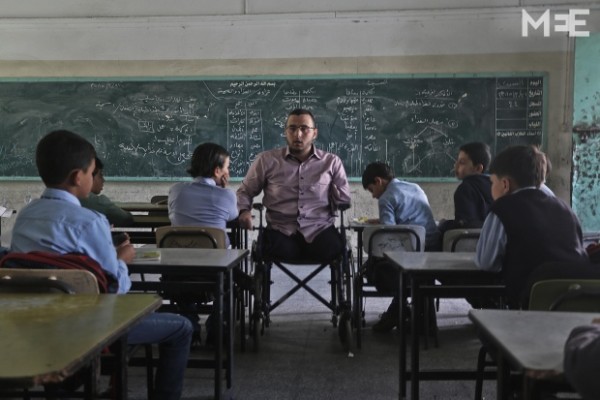 In swift but careful movements, Ahmed al-Sawaferi, 25, moves around his tiny apartment. The same hand that places a teapot on the fire then maneuvers his wheelchair as he gets his things ready for the day ahead.

It’s time to say goodbye to his children: Jana, 4 and Motasem 10 months – before he leaves for Safad School in Zaytoun, one of the areas next to Shejaiya, east of Gaza City, a neighbourhood hard hit in last summer’s attack by Israel. He drives to the school determined to be as independent as possible and ensure that his own will should decide his future and not his disability.

As he makes his way around his neighbourhood, he cannot help but remember how drastically his life changed in a split second last year. One minute he was heading home to study for an exam and the next an Israeli missile struck and both his legs and one of his arms were torn from his body, rendering him wheelchair bound.

A few fingers remain on his left hand. They clutch at a piece of chalk as he writes notes on the classroom blackboard for his young students.

“Today’s lesson is about Islamic values and respecting the rights of your neighbours and all people,” he says to his students as he begins the class.

His voice is much stronger than those of the other teachers who share his corridor and his students pay close attention to their Palestinian, student teacher as he sits in his wheelchair, teaching the principles and values of steadfastness and survival; an important lesson given all of the odds stacked against them by virtue of where they live.

He explains to Middle East Eye that despite his disability, he remains steadfast and focused. “The Israeli occupation may have amputated a huge section of my body but, thanks to God, they could not amputate my determination and willingness to rise, day after day, and continue my Islamic studies and determination to graduate from college.”

“Today, I am living my life to the fullest – nothing can stop me,” says Sawaferi as he rolls his wheelchair out of his classroom at break-time.

“I teach the children that from the dust of destruction we will rise and resist,” he tells MEE.

Sawaferi is due to take a BA in Islamic studies after finishing his final university semester in June. He is more determined than ever to focus not on his disabilities but on his abilities to successfully teach a new generation. That will be his victory and his legacy, he says.

“It is a strange feeling, to sit in the same classroom where I was once a student. Now I am the teacher and colleague to my previous teachers.”

Sawaferi makes his way over to a bench where his students are sitting, and explains how he sat in the same spot, 17 years ago, dreaming of becoming a teacher.

“I never thought that I would be a teacher with challenged abilities. Nonetheless, my dream came true and nothing can stop me. Nothing should stop us because the occupation will end,” he says, as he moves himself to the soccer field, where he plays football with the students – using his only remaining hand.

With his wide, bright smile and neatly trimmed beard, he draws the attention of all the students on the field, who come to greet him.