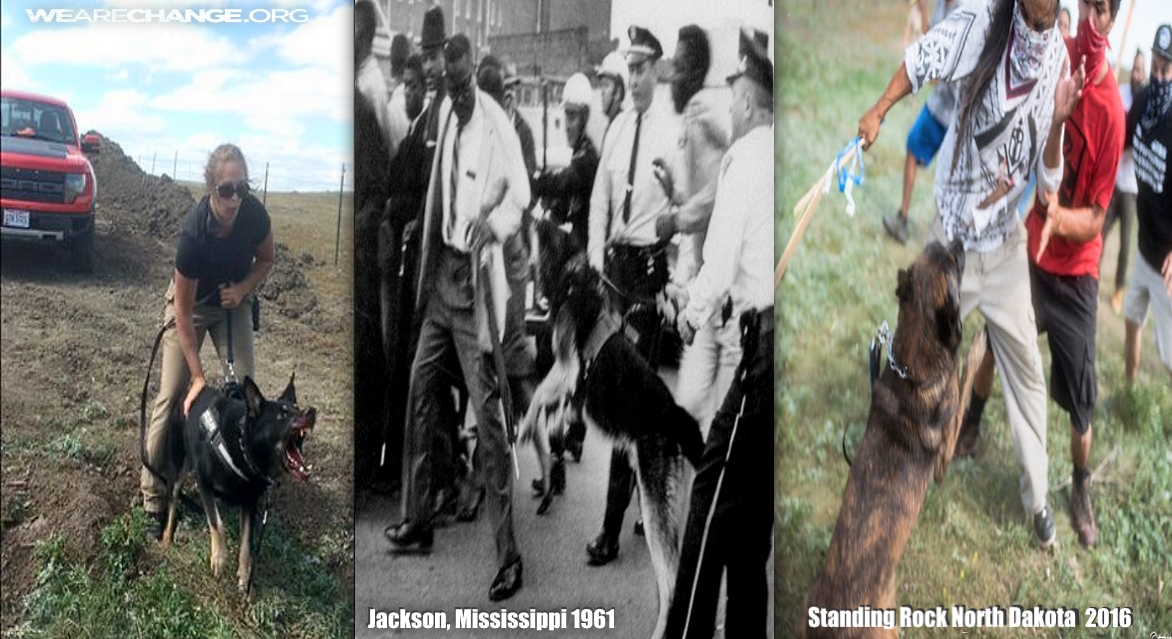 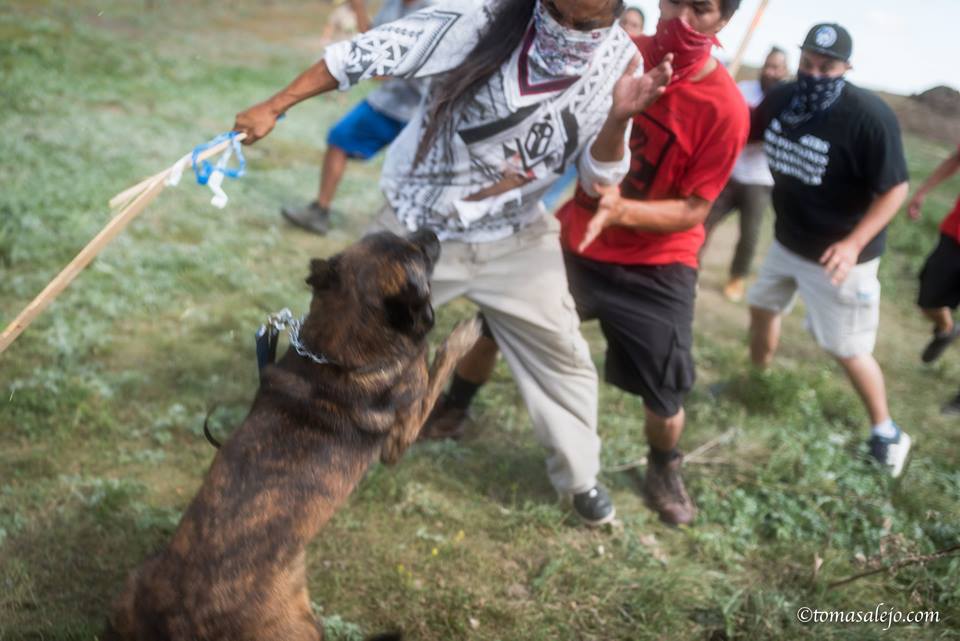 Cannon Ball River, North Dakota — 1851 Ft. Laramie Treaty Territory — Today, as we offered prayers to commemorate the 153rd anniversary of the Whitestone Hill Massacre against the Ihanktonwan Dakota peoples on the banks of the Cannon Ball River, a call to action was made to stand and block bulldozers as they plowed through an area containing ancient burial and cultural sites.

At approximately 3 p.m., water protectors successfully stopped Dakota Access pipeline construction as it reached Hwy 1806 through nonviolent direct action and mass assembly. In that process, private security employed by Dakota Access, LLC, a subsidiary of Energy Transfer Partners, deployed vicious attack dogs, pepper spray and physical assault against the water protectors. According to the most recent update, 6 water protectors were bitten by dogs, a dozen or more pepper sprayed and numerous were physically assaulted; which included women.
It was reported that a North Dakota state patrol helicopter was flying overhead during the attack.

“The only comment I have is that people trespassed and workers were hurt.” stated an unidentified North Dakota State Trooper after the incident. When pressed about the use of excessive force and attack dogs by a private security firm, the trooper referred reporters to the Morton County Sheriff.

This latest action comes one day after the Standing Rock Sioux Tribe submitted additional findings to the federal court to further support their case against the U.S. Army Corp of Engineers. Tribal historian Tim Mentz was invited to survey the property of a landowner whose land is in the pipeline corridor. In his statement to the court, Mentz states that his survey located at least 27 burials, 16 stone rings, 19 effigies and other features in or adjacent to the pipeline corridor. Mentz also stated that there are some features that are “unquestionably” eligible for listing under the National Historic Preservation Act. 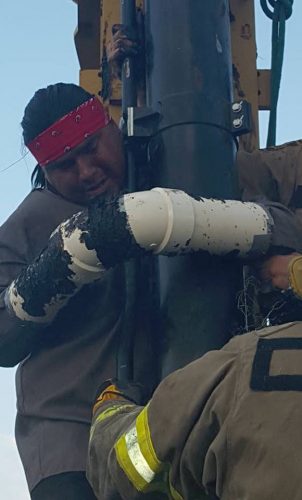 Eight people were arrested and charged on August 31 after disrupting a construction site for the Dakota Access pipeline. Two of them chained themselves to equipment, one of them for six hours.

Jeremiah IronRoad, 25, of Cannonball, ND, and Dale “Happy” American Horse Jr., 26, of Sioux Falls, were each charged with criminal trespass and obstructing government for chaining themselves to construction equipment, the Morton County Sheriff’s Department said on August 31. American Horse was also charged with resisting arrest.

It was part of a 100-person protest by the Red Warrior Camp, water protectors trained in direct action who are camped along the Cannonball River.

The Red Warrior Camp described the nonviolent action in which IronRoad and American Horse  locked themselves to construction equipment that Precision Pipeline Co. was using to work on the pipeline corridor under contract with Dakota Access LLC. Workers “politely left the worksite upon the arrival of our action team and supporters,” Red Warrior said. “Within minutes a group of private security guards arrived, along with members of Precision Pipeline management.

One security guard handed out ‘media reference cards,’ and all workers were instructed to say ‘no comment’ when asked direct questions by media or concerned citizens.”

“IronRoad warrior was removed safely from a large dump truck within an hour, but American Horse remained locked to the arm of a large excavator for nearly six hours, causing police and construction workers to bring in additional equipment to dismantle the machine. They were unsuccessful in this endeavor and eventually sawed off the ‘lock box,’ ” Red Warrior said. “Red Warrior Camp, Sacred Stone Camp, and allies from around the globe are committed to protecting our clean water sources.”

The call for support was made by a Lakota Vietnam combat veteran who happened to come upon the destruction of the sacred sites area, just one mile north of the encampment.We felt the need to protect these significant sacred and cultural sites on the land, because neither Dakota Access LLC or the U.S. federal government is not protecting them. Red Warrior Camp was nonviolent and unarmed throughout this action. We will remain nonviolent and unarmed. We ask supporters to do so as well Additionally, we ask that supporters keep the attention on the fact that Energy Transfer Partners feels justified in using this level of force against unarmed and nonviolent water protectors AND the state officers that are sworn to protect the people allowed it.

Calling for ALL water warriors around the world to come stand with us. If you are not able to join us physically, we ask that you join us in prayer and commit to our Weeks of Global Solidarity Actions from September 3-17, 2016.
*Red Warrior Camp will update as we obtain further information
Website: NoDAPLSolidarity.org
Social Media: facebook.com/RedWarriorCamp @RedWarriorCamp on Twitter/Instagram
Hashtags: #NoDAPL#WaterIsLife#RedWarriorCamp#SacredStoneCamp