The Intercept: Cross & the Sword Creating Christian Jihad in Ukraine 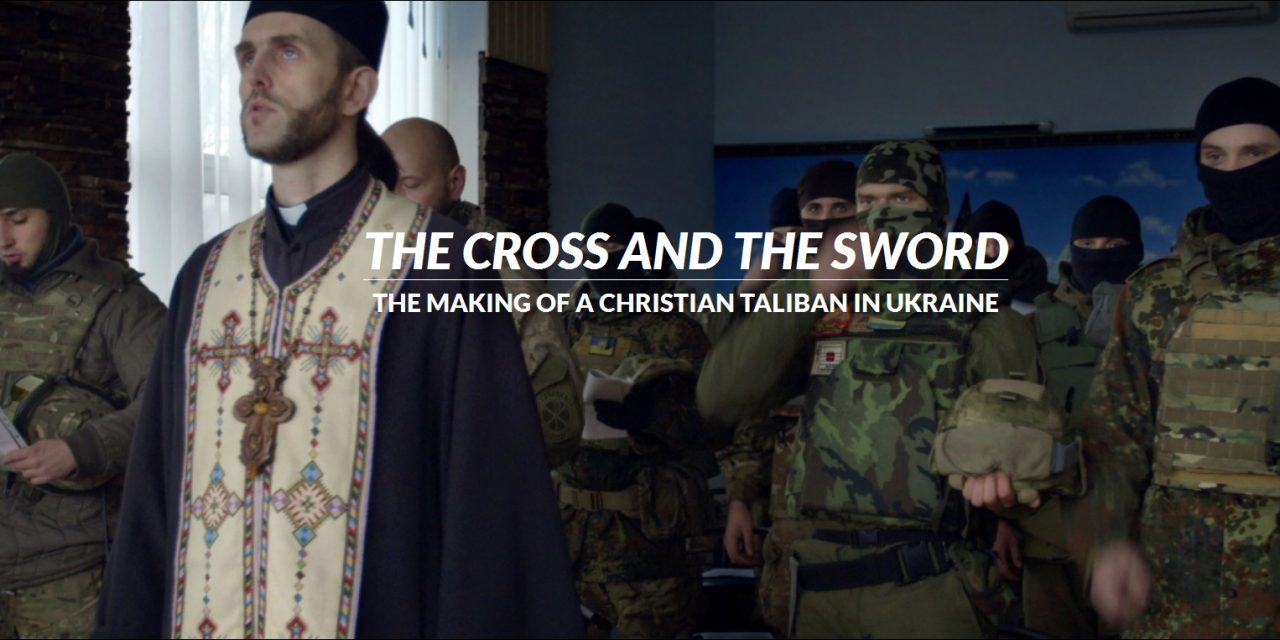 THE CROSS AND THE SWORD

The Making of a Christian Taliban in Ukraine

Photo by Tomasz Glowacki , for The Intercept

THE RECRUITMENT POINT for volunteers in Dmytro Korchynsky’s holy war is located in the basement of a building in central Kiev, on Chapaev Street, in what used to be a billiard club. Anyone can sign up, and the location isn’t secret — its address and phone number is on the Internet.

Inside, lying on the billiard tables, are toy Kalashnikovs, which recruits can use to shoot at targets on the wall. Behind the bar, shelves are lined not with liquor bottles but with Molotov cocktails left over from the violent protests that ousted the government a year ago; the firebombs may be useful in the next stage of Ukraine’s upheavals.

Along with being a recruitment center, the former billiard club also serves as the headquarters of Korchynksy’s political organization, “Bratstvo” (in English, the Brotherhood). I find Korchynsky in a side room furnished with a large billiard table, worn-out leather sofa, armchairs and a piano. Lying on the piano are the notes of Chopin’s funeral march and the lyrics to the German national anthem, whose first verse, beginning “Deutschland, Deutschland über alles,” harkens back to the Nazi era. It is perhaps an unfortunate choice of song for a political figure that is often described as an extremist, ultranationalist and fascist. Korchynsky does not pretend to be moderate, but he doesn’t appreciate the worst epithet used against his forces.

“We are not Nazis,” he tells me. “We are patriots and nationalists.”

Korchynsky is nearly a caricature of a Russian-hating Ukrainian nationalist. His silver hair contrasts with his dark, bushy mustache, which is turned down at the edges in the Cossack style. The St. Mary’s Battalion, which is one of more than a dozen private groups fighting alongside the Ukrainian Army against Russian-backed separatists in eastern Ukraine, is Korchynsky’s creation. It is also one of the more unusual volunteer formations in the ragtag forces taking on the separatists, incorporating an ideology that manages to mix Christian messianism with Islamic jihadism.

The religious thread is not entirely surprising — Korchynsky and his men are devout Orthodox Christians. It was in the 1990s that Korchynsky learned the advantage of mixing religion and politics when he fought in the Caucasus region alongside Muslims, who were battling Russia for independence.

Korchynsky points approvingly to Lebanon. There, Hezbollah participates in government as a political party, while its paramilitary wing wages war independent of the state (and is thus considered, by the United States and the European Union, a terrorist organization). Korchynsky believes that sort of dual structure would be beneficial for Ukraine. He sees himself as the head of an informal “revolutionary community” that can carry out “higher order tasks” that are beyond the formal control of government.

That’s the theory. In practice, Korchynsky wants the war in eastern Ukraine to be a religious war. In his view, you have to take advantage of the situation: Many people in Ukraine are dissatisfied with the new government, its broken institutions and endemic corruption. This can only be solved, he believes, by creating a national elite composed of people determined to wage a sort of Ukrainian jihad against the Russians.

“We need to create something like a Christian Taliban,” he told me. “The Ukrainian state has no chance in a war with Russia, but the Christian Taliban can succeed, just as the Taliban are driving the Americans out of Afghanistan.”

For Korchynsky and the St. Mary’s Battalion, the Great Satan is Russia.

KORCHYNSKY WAS BORN to fight Russia. “We really like civilization,” he explained. “We want to have hot water in the bath and a functional sewage system, but we also want to be able to fight for our ideals.”

Korchynsky wants to move the war to Russian territory, and he says his people have already formed underground structures there. Like the Islamic State, one day his “brothers” will receive orders and begin their work.

“We will fight until Moscow burns,” he says.

Read Part One and Part Two on Ukraine’s Private Battalions.

–  The material for this story is part of BROTHERS, a documentary film being developed for Germany’s broadcaster WDR – Die Story and Autentic, produced by Propellerfilm, broadcast date May 18th, 10pm (MET).