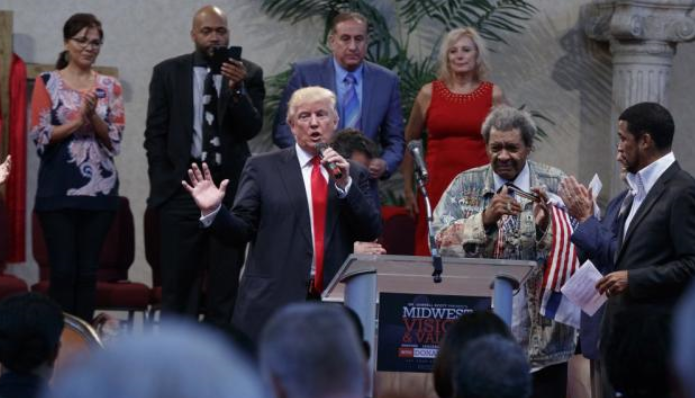 Talking about the Tulsa, Oklahoma shooting of Terence Crutcher, Republican nominee Donald Trump called for more accountability, better training, and to weed out the weak minded who can’t handle the stressful and demanding job of being a police officer.

Trump said officers who choke under pressure and are quick to make rash decisions shouldn’t be police officers at a speech in Cleveland, Ohio.


Trump told the crowd, “As you know I am a tremendous believer in police and law enforcement, because we need that for ourselves, we do, and I really got the endorsement from so many different groups and there great people, great people, you always have problems you have someone in there that either makes a mistake or chokes.”

Trump has previously expressed support for law enforcement and has been endorsed by the largest police union in the U.S., even telling a police organization in New Hampshire, the New England Police Benevolence Association back in December that every single cop killer gets the death penalty if Trump wins. Trump also condemned the recent Dallas Police Officer shooting at a Virginia campaign rally in July.

Speaking about the Tulsa shooting, Trump also told the crowd, “I must tell you I watched the shooting in particularly in Tulsa, and that man was hands up, that man went to the car hands up, put his hands on the car. I mean to me it looked like he did everything you are supposed to do and this young officer I don’t know what she was thinking.”

Trump went on to call the shooting “very troubling,” questioning the decision making by female police officer Betty Shelby, who has now been charged with manslaughter.

“But I am very ,very troubled by it,” said Trump, “And we have to be very careful so these things are terrible that was in my opinion that was a terrible situation and we’ve seen others, and the police are aware of it too the police are troubled by it too. Now did she get scared was she choking what happened? Well maybe people like that who choke can’t be doing what they are doing.”

The Fraternal Order of Police responded to Trump’s criticism of officer Betty Shelby through it’s group’s executive director Jim Pasco. “He must be mindful of the due process rights and presumption of innocence accorded to all, including police officers,” said Pasco.

Trump is treading a cautious line between maintaining the support of law enforcement and it’s supporters, and the burgeoning group of black voters, independents, moderates, and former Democrats trending towards Trump. Recently, Trump also called for a “stop-and-frisk” in cities in response to the latest wave of shootings.

To see some of Trump’s previous statements on police, watch the videos below.