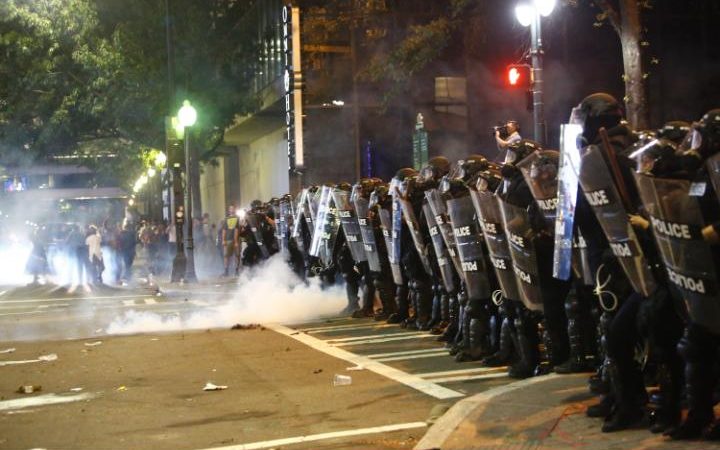 Chaos erupted last night in Charlotte, North Carolina, marking the second night of riots after the death of Keith Scott.

Scott was shot by police after allegedly refusing to drop his gun. Police have yet to release the dash cam video that proves Scott had a handgun.

The man critically injured was identified as a civilian and put onto life support after sustaining serious injuries. The people shot were reportedly not shot by police, but by a rioter, according to the city of Charlotte Twitter account.

ALERT: Fatal shot uptown was civilian on civilian. @CMPD did not fire shot.

However, the Charlotte Clergy Coalition for Justice, a local church group fighting for justice claimed that several of its members were just 10 feet from the victim when he was shot and they believe the shot was by police and are demanding surveillance CCTV video of the incident.

“I saw the man go down on the pavement, It was an ambush. The victim was shot while he stood between two ministers, and we believe he was shot by police. We would like to see surveillance video from the surrounding area that may have captured the shooting to determine who was responsible for the shooting.”

Police used riot gear, tear gas, flash bangs and batons to disperse the crowd rioting after Keith Scott’s death, which went viral after Scott’s daughter claimed he wasn’t carrying a gun but was instead carrying a book when he was fatally shot by officer Brentley Vinson. This story was corroborated by a neighbor witness who says a “book fell off his lap.” Until police release the dash cam video, the truth will remain up in the air.

Some rioters threw glass bottles at police and some shot fireworks at the officers. While some protesters marched peacefully, there was looting of a local sports store the NASCAR Hall of Fame and windows were smashed at local businesses and hotels. Rioters also stormed onto the highway, stopping traffic jumping on vehicles and smashing car windows with rocks.

CNN reporter Ed Lavandera was knocked down on live television by a rioter while attempting to report on the scene.

“We were just doing the report and I didn’t see it coming. All I heard was someone yelling at me that I needed to ‘tell the truth’ and the next thing you know I got kind of blindsided,” said Lavandera.

Protester bodychecks CNN reporter, knocks him to the ground at #CharlotteProtest pic.twitter.com/5wkzPXFfdp

As many rioters were treating Charlotte like a race war, the police responded with the same level of aggression. One ex-military service member, 24-year-old Sage Lawson of Reidsville, NC, told the The Guardian, “They’re treating us like we’re in a war zone we couldn’t do this to people in Afghanistan. They can snatch people out of a crowd and just throw them in a van. We couldn’t do that in war.”

Calling for peace, Keith Scott’s wife Rakeiya Scott issued a statement,
“As a family, we respect the rights of those who wish to protest, but we ask that people protest peacefully.  Please do not hurt people or members of law enforcement, damage property or take things that do not belong to you in the name of protesting.”

Many have contended that Keith Scott was lawfully carrying a gun, as North Carolina is an open carry state. While the dash cam video may eventually tell the truth on whether Scott’s shooting was justified, Scott’s wife has rightfully told protestors – don’t damage people or property. Two wrongs don’t make a right.

Online, several hackers affiliated with the online hacktivist collective Anonymous called for website sit in’s or DDoS attacks to take down the city police and state government websites in response to the way the police reacted to protesters.

Just confirmed hackers took down the City of Charlotte's website for a period of time tonight @wsoctv pic.twitter.com/ge6anoIztu

For the people on both sides of the Black Lives Matter divide, remember – George Soros is paying millions to inflame this situation. As Americans, black and white, red and blue, we need to talk to each other. We can solve America’s policing issues and create a new peace in our country.