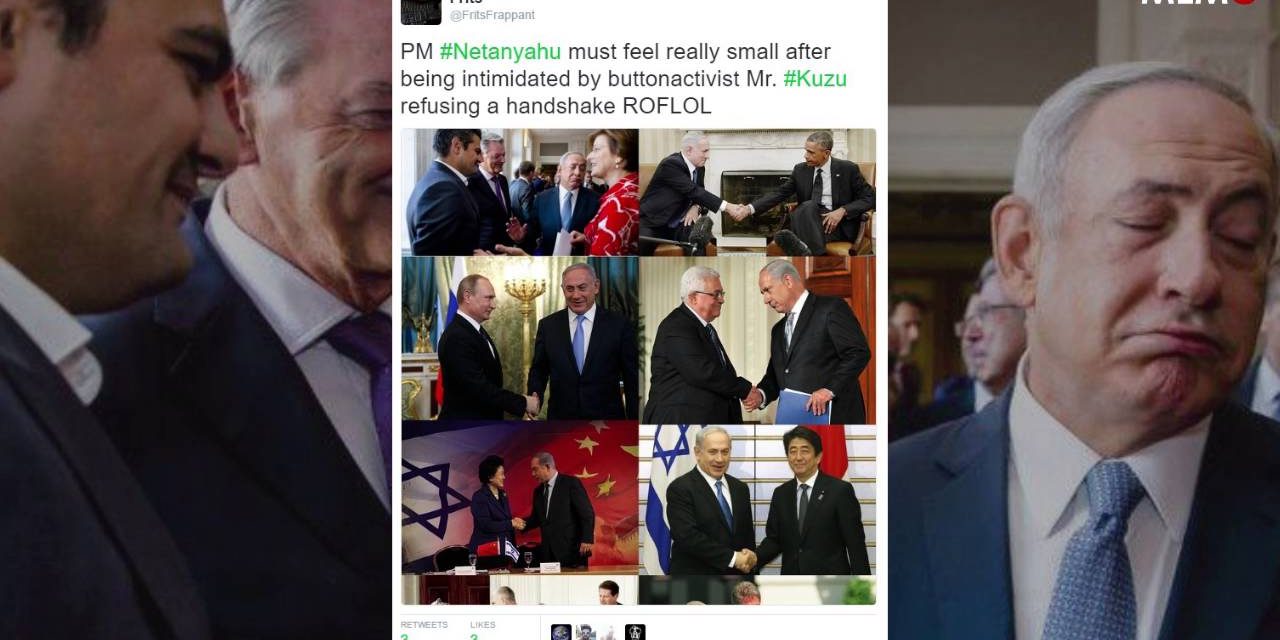 Video footage captured the moment Kuzu came face to face with the prime minister. Dissident Labour MP Kuzu had a flag of Palestine pinned to his chest when he refused to shake hands with the Israeli prime minister.

Kuzu wrote on his Facebook page about the incident, “While the streets of Gaza were reddened by blood that splashed out of the veins of children in the summer of 2014, the red carpet is rolled out here. That deserves no handshake, but a reference to #FreePalestine.”

Huge pro-Palestine protests were held in the country ahead of his arrive with protesters holding banners which read “send him right away to the International Criminal Court”.

Dutch Councilman Tunahan Kuzu responds to Netenyahu's "israel is the only democracy in the Middle East" #Burn pic.twitter.com/w9La7rOZAJ

In a statement posted on Facebook, Kuzu said that after the cameras left the room, he confronted Netanyahu with photographs of Palestinians suffering abuses in Gaza and the West Bank — including one of a 12-year-old Palestinian boy, with one arm in a sling, who was placed in a headlock by an Israeli soldier — and asked the Israeli leader if this matched his rhetoric about promoting democracy, technology, and security in the region.

Netanyahu was greeted more warmly by Prime Minister Mark Rutte, but the Dutch leader made it clear that his government wants an immediate end to the building of Jewish-only settlements on the territory Israel seized in 1967, supports the labeling of Israeli exports produced in the occupied West Bank, and would not bar citizens of the Netherlands from taking part in the Palestinian-led Boycott, Divestment, and Sanctions movement against firms that aid Israel’s occupation.

In his remarks, Netanyahu said that “Israel is not only defending itself, Israel is also helping to defend Europe” from “radical Islamist terrorists.”

On the flight home, Netanyahu recorded a message for his social-media followers in which he said the incident showed the difference between “those who want peace and those who don’t.”

PM Netanyahu: Today, we saw another clear example – of those who want peace and those who don’t. pic.twitter.com/E6FClNdF7E

The Israeli prime minister could find a much more receptive audience on his next trip to the Netherlands if the anti-Islam Freedom Party, which is leading in the polls, comes to power after elections in March.
In his party’s platform, released last month, Wilders promised to “de-Islamize the Netherlands” by closing the nation’s borders to immigrants from Muslim countries, expelling refugees, closing all mosques and Islamic schools, and banning the use of the Quran.
Via. Theintercept.com