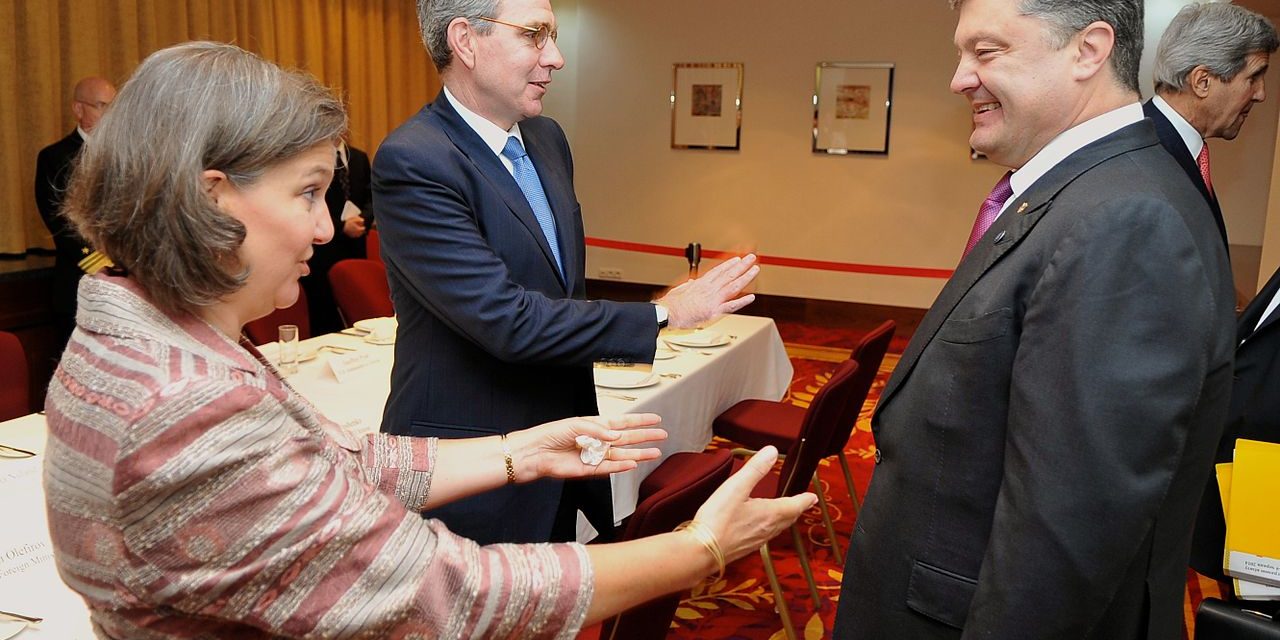 On February 7, 2014, the BBC published a transcript of a bugged phone conversation between Assistant Secretary of State Victoria Nuland and the U.S. Ambassador to Ukraine, Geoffrey Pyatt. The media reports that followed the leak distracted audiences from the actual content of the phone call, focusing instead on Nuland’s crass statement, “Fuck the EU.”

If the media had done its job, a simple analysis of the phone call would have revealed something wholly controversial about the Ukrainian crisis: the U.S. was handpicking who they wanted to form Ukraine’s government after its former president, Viktor Yanukovych, was ousted from power.

“Yeah. I guess… in terms of him not going into the government, just let him stay out and do his political homework and stuff. I’m just thinking in terms of sort of the process moving ahead we want to keep the moderate democrats together. The problem is going to be Tyahnybok [Oleh Tyahnybok, the other opposition leader] and his guys and I’m sure that’s part of what [President Viktor] Yanukovych is calculating on all this.”

“I think Yats is the guy who’s got the economic experience, the governing experience. He’s the… what he needs is Klitsch and Tyahnybok on the outside. He needs to be talking to them four times a week, you know. I just think Klitsch going in… he’s going to be at that level working for Yatseniuk, it’s just not going to work.”

According to a cable obtained by Wikileaks, Yanukovych’s successor, Petro Poroshenko, previously worked as a mole for the U.S. State Department. The State Department even referred to Poroshenko as “our Ukrainian insider.” He currently has a 17 percent approval rating.

What this amounts to is tangible and credible evidence that the U.S. interfered or attempted to interfere in a government that borders Russia in order to remove a pro-Russian leader and replace him with a very well-established American puppet. History shows that Ukraine is no exception to this American habit, as there is documented evidence to show the U.S. has interfered overtly and covertly in the governments of Guatemala, Congo, Dominican Republic, South Vietnam, Brazil, Chile, Hawaii, Cuba, the Philippines, Puerto Rico, Nicaragua, Honduras, Panama, Grenada, Afghanistan, Iraq, and Iran, to name a few.

These are undisputed facts of history. In fact, these events are so common that no one seems to give the incidents so much as an afterthought. Despite this evidence, the media is unironically claiming it was Russia that interfered in American politics to promote a pro-Russian candidate and have him take control of the White House.

Since Trump was elected at the end of 2016, we have seen story after story, headline after headline, and rabbit hole after rabbit hole alleging that somehow, Russia was able to “hack” the election and bolster support for Trump, which eventually culminated in Trump’s victory.

So, let’s review the evidence for these claims.

There is none — and if there is, it still hasn’t been made public.

Is there a leaked phone call of Trump and/or Putin? No.

Considering the CIA and other intelligence agencies’ long reach and incredible resources, is there any evidence to show Russia hacked the election — or that they interfered at all with a view of promoting Trump?

This is a direct quote from BBC on this topic from as recently as last week:

“So far, no single piece of evidence has been made public proving that the Trump campaign joined with Russia to steal the US presidency – nothing.”

No one even seems to be remotely concerned with the illogical and overly imaginative effluvium contaminating this story. Clinton’s election campaign had the backing of 57 of America’s 100 largest newspapers. Globally, she had the backing of 500 outlets; Trump had the support of a mere 26. The Clinton Foundation received substantial donations from Saudi Arabia and Qatar, two known financial supporters of the terror group ISIS. Even the New Zealand government donated millions of taxpayer dollars to Clinton.

Despite this overwhelming worldwide support, anti-Russian conspiracy theorists are convinced Russia was somehow able to hack the election and portray Hillary Clinton as an untrustworthy, pathological liar — and as a result, gift the election win over to Trump.

But Clinton earned her detestable reputation all by herself — without Russian interference. Further, it was actually Clinton’s election strategy to “elevate” Trump in the first place, not Russia’s. This, in essence, gave him free airtime and ultimately underestimated how popular he was going to be with the American public.

Finally, Clinton still won the popular vote by a considerable margin. Did the Russian strategy of “hacking” the election and boosting Trump factor this into account, as well? Was Russia able to strategically generate the support required from each of the states needed to win the election and discount the popular vote? How would that have even worked?

There is an overwhelming amount of evidence to suggest that if the DNC hadn’t purposely killed Bernie Sanders’ campaign, Trump would never have won the election in the first place. Russia did not kill Sanders’ campaign — Clinton’s backers did. Even now, a recent poll conducted by Fox News suggests Sanders is currently the most popular American politician.

And what does promulgating this particular narrative achieve in the long run? As Foreign Affairs notes, the propaganda does not always work in favor of those who perpetuate it:

“It seemed clever when Hillary Clinton pounced on Trump as ‘Putin’s puppet.’ But apparently it didn’t resonate much with ordinary Americans, who elected Trump, and neither does the pettiness and demonization of Putin resonate with ordinary Russians.”

Even now, as former National Security Adviser Michael Flynn has offered to testify before the House and Senate intelligence committees in exchange for immunity from prosecution, the narrative still retains a non-story quality to it. Consider this excerpt from Vox:

“The implication is that Flynn has vital information about the ties between Trump and Russia, and that he did some questionable stuff while working for the Trump team. Thus, it would be in the public’s interest for Congress to grant Flynn immunity so he could explain what he did — and how many others in the campaign were involved.

“Here’s the catch: We have no idea what, if anything, Flynn actually has.” [emphasis added]

The irony of Michael Flynn’s position is that the intelligence community actually ousted him from Trump’s government.