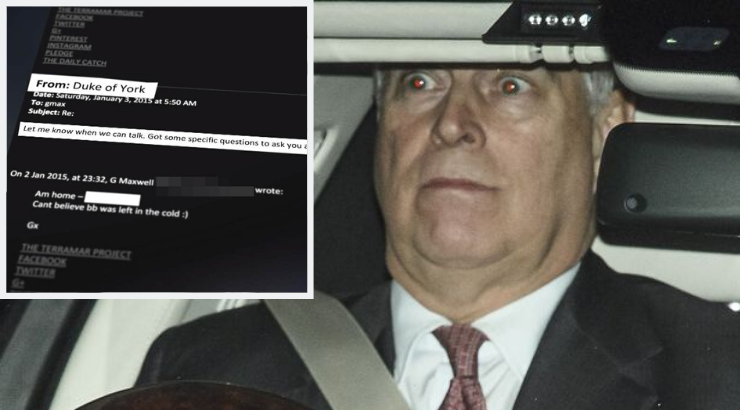 Things continue to get worse for Prince Andrew, as five more women have come forward to accuse him of being present during the abuse that took place on Jeffrey Epstein’s properties.

The prince has denied all of the allegations against him, especially in regard to his main accuser, Virginia Giuffre, who appeared in a photograph with him while she was under the age of 18. It was during this time in which she says that Epstein forced her to have sex Prince Andrew, in addition to other wealthy and powerful men.

Andrew denies ever meeting Giuffre, despite the photographic evidence, which he insists must be fake. Now, in a new BBC documentary, emails between Prince Andrew and Ghislaine Maxwell cast further doubt on his denials.

The BBC’s Panorama aired an interview with Giuffre this week, along with a documentary detailing some of the other evidence in the case. Among the evidence was an email exchange between Andrew and Maxwell, which the BBC found buried in thousands of pages of legal documents.

An American woman who accused the convicted pedophile Jeffrey Epstein of sex crimes has revealed new details of the night she says she was forced to perform sex acts with Britain's Prince Andrew.https://cnn.it/33KR1ro

“Let me know when we can talk. Got some specific questions to ask you about Virginia Roberts.“

Maxwell responded by saying, “Have some info—call me when you have a moment.” However, details of the resulting. phone conversation are unknown.

According to the Telegraph, Prince Andrew held a meeting with Ghislaine Maxwell at Buckingham Palace just two weeks after U.S. prosecutors reopened their investigation into the crimes of Jeffrey Epstein, although the prince denied in his recent interview that this was the case.

A source recently told the Sun that Andrew and Maxwell have “remained constantly in touch by phone and email” as the scandal continues to deepen.

“Ghislaine will do anything to protect the Duke and the feeling is mutual. They both share the same view they have done nothing wrong. Andrew has always been very stubborn and as far as he is concerned both he and Ghislaine have done nothing wrong and so why should anything get in the way of a friendship that has lasted more than 20 years,” the source said.

“They talk regularly. If he wasn’t in the spotlight at the moment he would have found a way to meet up with her,” the source added.

Maxwell’s whereabouts are currently unknown despite the face that she has repeatedly been identified by many of Epstein’s victims as a vital part of his trafficking operation.