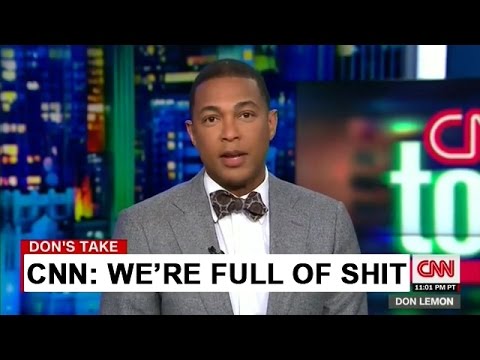 CNN reporter Don Lemon threw any semblance of credibility he had in the trash recently, as he and his network tried to deny that former National Security Advisor Susan Rice was caught unmasking and spying on Donald Trump’s team.

While fumbling his words, this is what Lemon said:

“Let us be very clear about this: there is no evidence whatsoever that the Trump team surveilled, or spied on, or was spied on illegally. There is no evidence that backs up the President’s original claim, and on this program tonight we will not insult your intelligence by pretending otherwise. Nor will we aid and [unintelligible] the people who are trying to misinform you, the American people, by creating a diversion.”

When Lemon is talking about “the President’s original claim,” he is referencing President Trump’s allegations that Obama tapped his phones during the election:

This wasn’t all that Don Lemon said that wasn’t true, he also claimed that “last week it was a debunked talking point that former Obama administration official Evelyn Farkas admitted spying on the Trump team, she did no such thing.”

Yes, She Did Do That

The Trump administration seems very convinced that Obama was spying on him during the election season, but let’s not take their word for it. Contrary to what Don Lemon claims, Farkas did admit to knowledge of Obama’s administration spying on the Trump team. In fact, she specifically said that:

“if they found out how we knew what we knew about their the staff, the Trump staff, dealing with Russians, that they would try to compromise those sources and methods”

If members of the Obama administration are admittedly gathering intelligence on the Trump staff, to the point where the Trump staff are not aware, and the Obama officials are furthermore afraid that the Trump team would later “try to compromise those sources and methods” they are engaged in spying, as defined in the dictionary. Espionage, by the way, is a criminal act.

We cannot yet confirm whether espionage was done specifically by means of wiretapping, as asserted by President Trump, but Farkas’ comments will continue to echo into history as the investigation behind these allegations continues.

Lemon also denigrated House Intel Committee Chairman Devin Nunes for speaking on that there was evidence that President Trump had been spied on by the Obama administration.

“The week before that it was representative Devin Nunes’ clumsy effort to give the President cover for wiretapping claims. The president said he was vindicated by Nunes. He was not.”

Of course, Lemon is referencing Devin Nunes’ effort to receive information on surveillance and unmasking, which he then relayed to President Trump. Trump said that he was “somewhat” vindicated by Nunes’ briefing.

President Trump on if he feels vindicated by Rep. Devin Nunes’ comments: “I somewhat do” https://t.co/sSuuMDzzfd https://t.co/5oGGN1zocj

Lemon also seems to think that the unmasking allegations against Susan Rice are untrue altogether, citing a Washington Post opinion column as alleged proof of his claim. The opinion column asserts that President Trump is lying and perpetuating the story. It doesn’t offer any sort of definitive proof, because after all, it’s an opinion column.

To see Lemon’s full remarks, watch the video below: