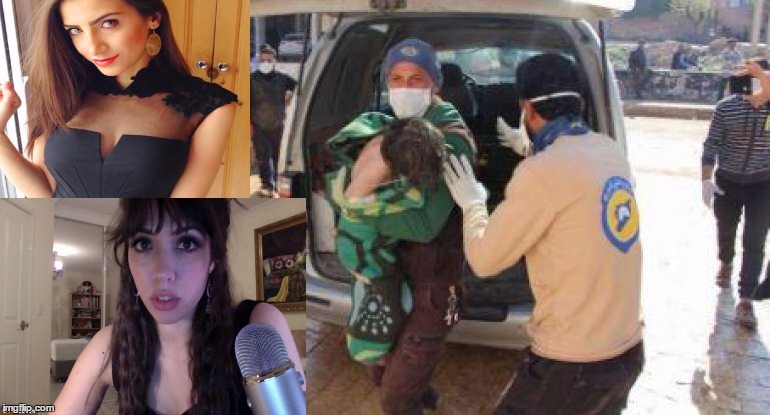 Two prominent journalists with experience on Syria believe the recent gas attack was a false flag – designed to make the Trump administration go to war with Assad.

Sarah Abdallah noticed something strange – that a Syrian reporter for Gulf-based Orient TV tweeted about the attack 24 hours before it took place.

Abdallah translates the reporter’s tweet: “Tomorrow a media campaign will begin to cover intense air raids on the Hama countryside and use of chlorine against civilians.” Another reporter, Mimi Al-Laham, known as Partisan Girl, said, “this shows clear foreknowledge that the rebels were going to stage an attack by Orient TV.”

Wow. This anti-Assad "reporter" tweeted about the sarin attack in #Syria 24 hours before it happened. Still think nothing fishy is going on? pic.twitter.com/xrGWemylFW

Tweet says: "Tomorrow a media campaign will begin to cover intense air raids on the Hama countryside and use of chlorine against civilians"

Al-Laham also reported that The White Helmets, an al-Qaeda affiliated group funded by George Soros and the British government, were responsible for the chemical weapon attack on civilians in the Syrian city of Khan Shaykhun. She goes on to state in another “coincidence” that “250 people were kidnapped by Al-Qaeda last week from the nearby city of Hama, which is the same number as the current body count of wounded and killed civilians.”

Al-Laham further noted that the media’s narrative has quickly changed from “Nerve Agent” to “Sarin” to “Chlorine.” She added that the “media is quick to believe anything without any evidence.” She also exposed one of the media’s sources – a doctor, Shajul Islam, who is facing terror charges for kidnapping and torturing two British journalists in Syria.

The Narrative has shifted, from "Nerve Agent" "Sarin" to "Chlorine Gas". Media quick to believe anything without evidence. #SyriaGasAttack pic.twitter.com/UBistvBWQO

In another case of “coincidence,” Partisan Girl explains that the White Helmets received sarin-protective respirator suits one month before the attack, despite the Syrian government no longer owning Sarin gas according to OPCW and John Kerry himself as Abdallah points out.

In 2014, Kerry admits that #Syria gave away ALL its chemical weapons. But today we're supposed to believe that Assad gassed his own people? pic.twitter.com/DT9B9cYyKH

We’ll leave you with a very thought provoking question from the Syrian Deputy Ambassador.

“Who is the beneficiary of chemical attacks? It is the terrorist Forces that seek to topple our govt,” Syrian Deputy Ambassador at UNSC.

"Who is the beneficiary of chemical attacks? It is the #Terrorist Forces that seek to topple our govt" – #Syria Deputy Ambassador at #UNSC pic.twitter.com/Oks6yTE1pC